A building survey of a fairly ordinary 19th century brick stable block in the west of Worcestershire uncovered a peculiar set of objects. Nailed above the lintel to the entrance way was a pair of mammalian skeletal feet above an iron horseshoe. 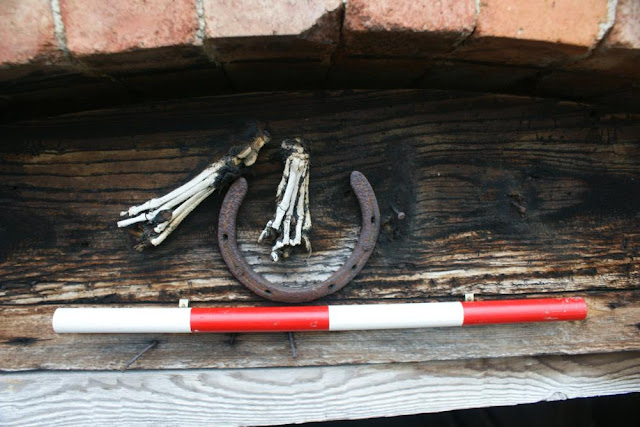 A horseshoe above a stable entrance may not seem so odd, but its origins as a protective symbol stem from the early medieval period and is said to come from the story of St. Dunstan, who was asked to re-shoe the Devil’s horse, but instead nailed a shoe to the Devil himself. It caused the Devil great pain, but Dunstan only agreed to remove it if the Devil promised not to enter any place where a horseshoe was above an entrance way (St Dunstan’s – who was St. Dunstan, undated).

The tale proved so popular that John Aubrey, writing in the late 17th century, noted that:

“It is a thing very common to nail horse-shoes on the thresholds of doors: which is to hinder the power of witches that enter into the house. Most houses of the West end of London, have the horse-shoe on the threshold. It should be a horse-shoe that one finds.” (Aubrey 1696)

Doorways and entrances were routinely singled out for protection in historic houses, with protection symbols located around fireplaces and doorways. You can see examples of this tradition being maintained to this day at The Fleece Inn, Bretforton. In the 17th century, an overtly Christian symbol became common with “VV” being carved into timbers and stonework. This is believed to stand for Virgo Virgimnum (Virgin of Virgins) and invokes the protection of Mary. 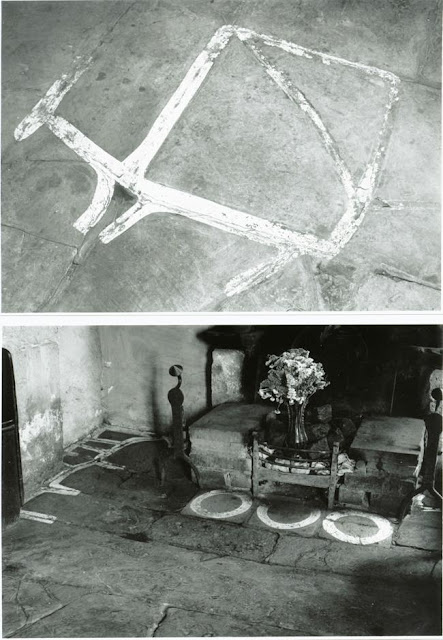 It is not only the household that people sought to protect against witches: horses were also protected using either flint or metal, usually lead, tokens (Davis, Easton 2015, 223). These were either hung on the horse or somewhere in its stall to prevent evil spirits known as ‘mares’ riding them through the night:

“To hinder the night mare, they hang in a string, a flint with a hole in it (naturally) by the manger; but best of all they say, hung about their necks, and a flint will do it that hath not a hole in it. It is to prevent the nightmare, viz. the hag, from riding their horses, who will sometimes sweat all night. The flint thus hung does hinder it.” (Aubrey 1696)

‘Mares’ were also thought to ride on the chests of people while they slept, bringing on bad dreams, hence the modern use of the term ‘nightmare’.

The more peculiar object that is also nailed above the lintel is the skeletal feet, which were initially thought to be those of a cat. However, the size and context of the bones points more towards them being fox paws. There are many traditions within fox hunting which trace their origins to the 16th century. The head (mask), tail (brush) and feet (pads) are given away to certain members of the hunting party as hunting trophies (Johnson 2016). Placed within the context of the stables and with the iron horseshoe it could be interpreted that perhaps the skeletal remains of the fox feet were to bring about a successful next hunt.