What are Descriptive registers?

Descriptive registers give information on a police officer’s period of service.  The registers can include information on previous public service such as time with another police force or in the armed services, together with pay rates and the stations in which they worked.  Details of promotions, transfers and reasons for leaving the force such as retirement, transfer or resignation are also recorded.

What is much more interesting, particularly for those researching a police ancestor, is that the registers give a physical description of the officer including eye and hair colour, weight and height.  Sometimes this includes brief reference to a birthmark, mole or operation scar, but it can be quite detailed such as ‘lost end of middle finger of right hand’.  Tattoos may be described quite vividly such as ‘tattooed both arms, crossed hands and heart’ or ‘tattooed star and crescent and Salome left forearm’.  There are also details of any sickness, injuries or accidents which may have befallen them while on duty.  You can almost picture the person being described in your mind’s eye.

Place of birth, religion, trade and education are often included.  For married officers, details of their spouse and children are also noted.  Many of the officers were local to Worcestershire or to the Midlands, but some did come from much further afield such as Wales, Norfolk, Essex, Devon and Northumberland to serve in the Worcestershire Constabulary.   One even gave his birthplace as Australia.  The original trades of the officers can make for interesting reading too.  Alongside railway workers, miners, gardeners, gamekeepers and those from the armed services, a silversmith, canal boat owner, musician, cinema operator and golf professional all decided that a policeman’s lot was for them. 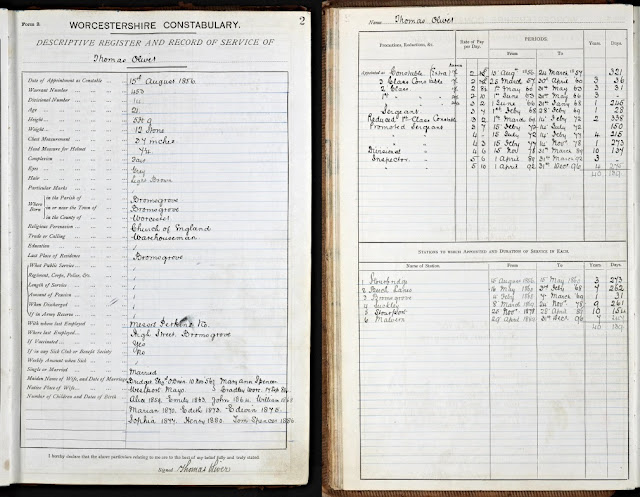 Example pages from an early descriptive register showing an entry from 1856.Image used with thanks to West Mercia Police.

Commendations and awards are also recorded.  This may relate to good work in helping to arrest someone or solve a crime, but may also include bravery in stopping a runaway horse and carriage or saving someone from drowning.  On the flip side the registers can also include reports of misconduct of officers such as falling asleep while on duty, persistent drunkenness, failing to turn up at point or arriving late for work.  Persistent misbehaviour resulted in docking of pay, demotion and in some cases dismissal.

What do we hold?

We hold a series of descriptive registers for Worcestershire Constabulary from 1839 to 1953.  Please note that the more recent registers will not be open to public inspection, in accordance with the 75 year closure period that West Mercia Police apply to their archives.

Some of the descriptive registers have become damaged over the years, perhaps because of over-handling, poor storage conditions or a mixture of the two.  In some cases the spines have come away from the bindings and the sewing threads have broken so the pages are loose.  In other cases the binding has started to peel or is ripped and scuffed.  All this makes it difficult for the volumes to be handled without causing further damage. 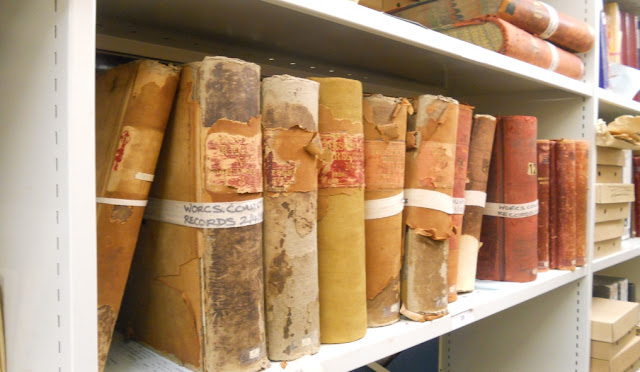 Some of the descriptive registers before conservation treatment

The work to conserve the volumes has been very time consuming as there are several different processes involved.  Each volume has been cleaned with a soft brush or sponge to remove the surface dirt.  Then any damaged pages have been repaired using tissue paper.  Torn or loose binding material has been re-glued into place where possible.  Where the original binding material had been lost, suitable linen or leather has been used and dyed to match the colours of the original item.  Those volumes which had broken sewing or lost spines have been re-sewn and re-bound.  Our conservation volunteers have then made bespoke boxes to protect the newly conserved volumes. 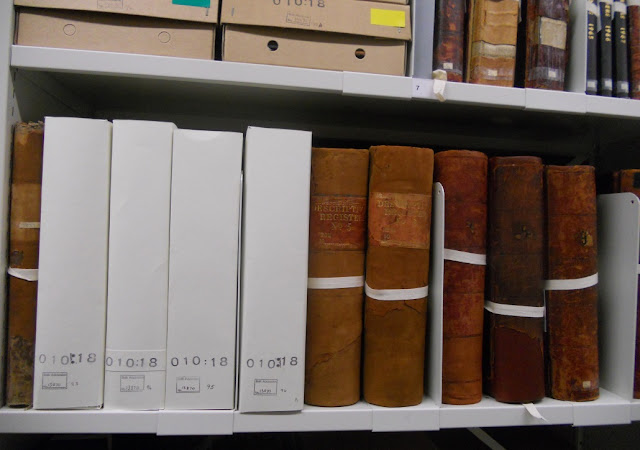 Some of the descriptive registers after conservation

Our conservator Rhonda Niven said of the task ‘I enjoy working on these large volumes, even though they can be difficult and heavy to move around. Although they were designed to be functional and robust every day volumes, I like to think of the importance that they had in recording the details of so many lives.  I am pleased they have now been repaired and can continue to be handled, revealing the details of the life they have had, both as beautiful objects and for the information they contain.’