Lavinia Talbot’s diary 1916: Reflections on Jutland, Kitchener and the Somme

Lavinia Talbot kept a diary from her teenage years right through to old age.  The diaries provide a unique window on her daily life, thoughts and feelings from the mid 1860s through to the 1930s.  In particular Lavinia recorded her observations on the conduct of the First World War.  She had three sons serving in the forces and many of the children of her wider circle of family and friends were also serving, so she took a keen interest in what was happening.

Lavinia’s diary entries for the beginning of June 1916 were initially full of meetings and social activities such as the wedding of Pamela Maude and Capt Billy Congreve.  That quickly changed and much of her entry for 3 June was given over to the confrontation between the German High Seas Fleet and part of the British Grand Fleet opposite Jutland.  In particular Lavinia recorded the sinking of the Queen Mary, the Invincible and the Indefatigable. A family friend, Charles Fisher, was serving on the Invincible and she was concerned about his fate.  This was likely to have been Lt Charles Dennis Fisher of the Royal Naval Reserve who was indeed killed in the battle as he is recorded by the Commonwealth War Graves Commission as having died on 31 May 1916. 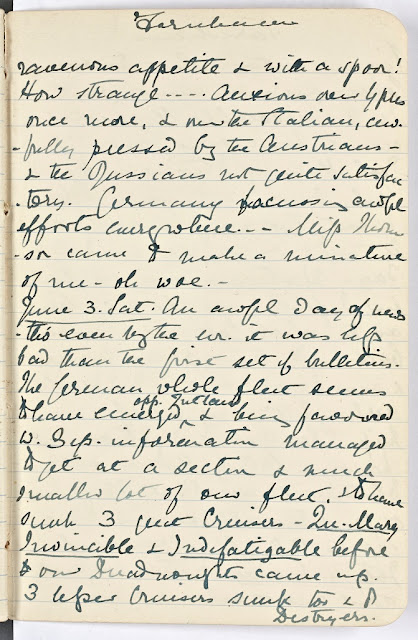 The battle of Jutland continued to be very much on Lavinia’s mind.  Her diary entry for 4 June mentioned an account of the battle by the Observer.  Her entry for 5 June focused on the missing and dead.  As well as Charles Fisher she also named other people she now knew had been killed – Spencer Portal boy, young de Carteret, Lucas, Marsden.  The ‘Spencer Portal boy’ was probably Raymond Spencer Portal aged 19 who also served on the Invincible.  Lavinia had been at a meeting with Mrs Spencer Portal just 2 days before.  ‘Young de Carteret’ was probably Midshipman Philip Reginald Malet de Carteret aged 18 who served on the Queen Mary.  ‘Lucas’ may have been Lieutenant Claude De Neuville Lucas aged 23 who served on the Indefatigable.  There was more than one person of the name Marsden who was killed in the battle so it is impossible to know to whom Lavinia was referring. 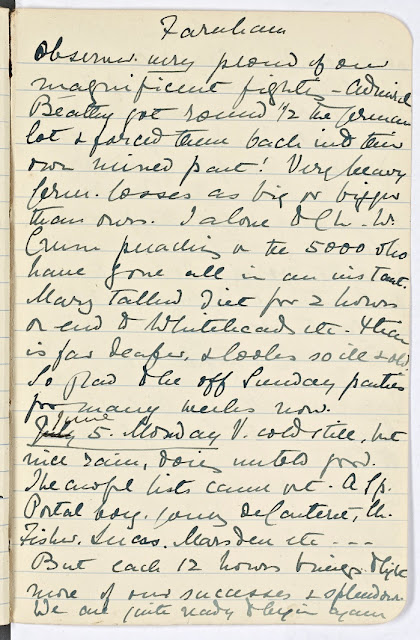 Lavinia’s diary entries recording further details of the Battle of

Jutland and names of those she knew who had been killed.

Lord Kitchener (1850-1916) was a figure very much associated with the First World War.  Apart from appearing on the iconic ‘Your country needs you!’ poster and contributing a method of making an invisible seam in knitting (the Kitchener stitch), Kitchener served as Secretary of State for War in the early years of the conflict. On 5 June 1916 he set off on a diplomatic visit to Russia, but was killed when the ship in which he was travelling was sunk by a mine.

Lavinia Talbot was in London for a meeting on 6 June and she recorded in her diary the moment when she heard the news of Kitchener’s death.  One of her fellow attendees told her that she had heard that Kitchener and all his staff had drowned.  Lavinia quickly got hold of a copy of the Evening Standard newspaper and saw the news for herself in the ‘stop press’.  It’s unclear whether she knew Kitchener personally, but her brother Sir Neville Lyttelton certainly did having served with him in the Sudan and South Africa.  The news of Kitchener’s death seems to have affected Lavinia a great deal as she recorded that it was a day ‘never to be forgotten’, that she ‘felt the ground giving way under me’ and that people looked ‘scared and moved’. 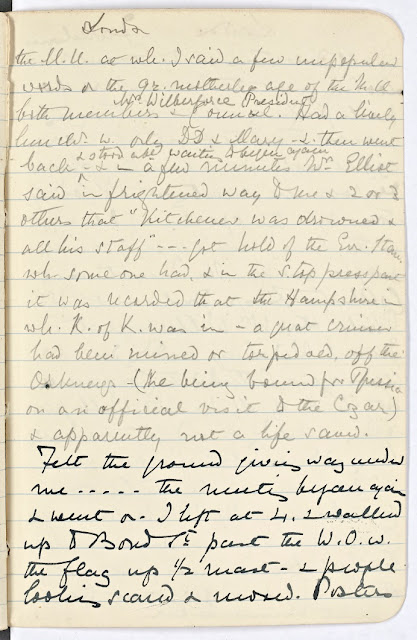 Interestingly Lavinia’s diary for the beginning of July 1916 is silent about the beginning of the battle of the Somme on 1 July, yet the papers must have been full of it in the days which followed.  It may be that because July marked the first anniversary of the death of her son Gilbert on the Western Front, the events unfolding in France and Flanders touched on such painful memories that she chose not to put down her feelings and observations on the event.  Instead her diary entries at the time were full of her visits to family and friends and cricket matches at Winchester and Harrow.  She did however comment in her diary entry for 9 July on the wounded soldiers arriving at Waterloo when she was up in London. She described it as an ‘interminable procession of wounded on litters, beautifully brought out of trains, laid on platforms & wafted without a jar into countless ambulance cars – still figures, reverently & silently greeted by [the] crowd with much feeling.  Masses of young Tommies just going on watched it all without moving’. 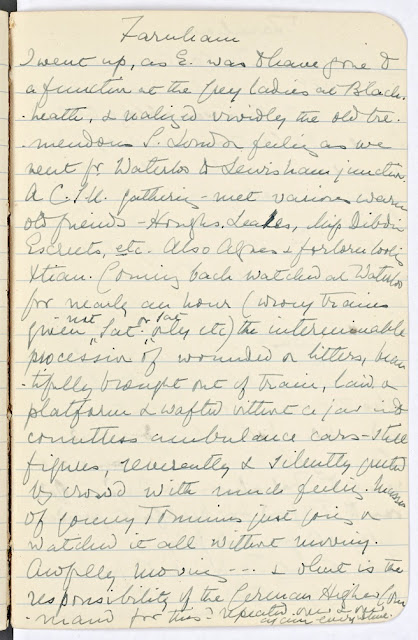 Lavinia Talbot’s diaries are part of the Lyttelton collection held here at The Hive. You can read further blog posts relating to this collection here.

For more information on events taking place across the county to mark the Somme anniversary check our Worcestershire World War 100 website.