Look within the many records held by Worcestershire Archive & Archaeology Service and you will find a number of collections of letters dating from the First World War. Our service has used these letters in a variety of ways in the centenary events we have been involved in recently, which are part of the Worcestershire World War One Hundred project. The letters provide a great insight into what people at the time were thinking, whether explicitly or by reading between the lines, and the opportunity to hold and read these original items offers a powerful connection to the individual that wrote it so many years ago.

During the centenary commemorations we have worked with young people to film letters being read aloud. One group was drama A-level students from Worcester Sixth Form College. As part of their coursework the students were required to submit recordings of them delivering a performance piece. Most of the extracts chosen were taken from plays, but they also need to perform prose which was never written for this purpose – real life writings that they could interpret. The WWI correspondence was ideal for this task, so we went over to the college with a selection of letters from two of our collections; those of Philip Leicester and of Rachel Lyttelton.

Philip Leicester was an officer from Worcester who joined the army in early 1915 and went to a training camp in Wiltshire. Rachel Lyttelton, the daughter of Viscount Cobham of Hagley Hall, volunteered to become a nurse soon after the outbreak of war and her letters cover the start of the conflict and accounts of her time in the hospital. As often happens it can be a struggle at first to decipher the handwriting of the letters, but once our staff helped the students to get started they soon began to get drawn into the stories of the letters and the characters contained within them. Although we only have the letters going one way and not any of the replies received, it is possible to follow the different topics and people they talk about thanks to the frequency of the letters.

Below you can find some of the recordings the students made for their coursework. For several letters there is more than one version. 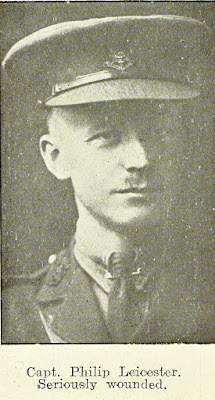 11 June 1915 – he writes of visiting someone in Brighton who is signed off sick. Although not specified it is probably a friend or relative who was wounded in action and is recuperating. His parents would like to come down from Worcester, although there are rumours of being moved to Aldershot and Basingstoke. He is involved in some big exercises involving up to 16,000 men, and he is given small units to command.

22 June 1915 – in between the training he is able to enjoy the countryside and described in detail the environment they are in with butterflies and birds, and the nearby wood. Like many letter writers Philip likes to describe where he is in his letters and the people he meets. He also talks about a night operation he was part of.

This letter was written at the outbreak of war and capture a little of the confusion that must have occurred. The post has gone mad, there is chaos on the railways and it is hard to find news. The house she is in is being turned into hospital. People still concerned about living their life and she slips in wider news like miners being patriotic. Rachel is not sure what her family doing, and although she’s sent this letter to Hagley she is not sure where they are.

Another early letter, Rachel is waiting for the railways to start to settle down. Daily life is included, such as picking gooseberries

This letter describes a little of what London was like. People were mobilising and volunteering, for instance helping with refugees.

By this letter Rachel has become a nurse and is writing from her hospital ward whilst listening out for patients waking. She talks about friends and colleagues who are about to leave. Many letters from WWI refer to friends suddenly being posted elsewhere, which must have been hard for people.