1 Day Without Us – An Historical Perspective

Saturday 17th February is 1 Day Without Us – a national event to celebrate migration, migrants and the contribution they make to society. Migration is the source of much discussion in the UK at present and, for some, invokes strong opinions. It is sometimes portrayed as a new phenomenon with a clear division between those who have ‘recently’ arrived and those who were here ‘before’.

But Britain has seen many communities and individuals arrive over time, so where do we draw the line? Do only the descendants of Britain’s first hunter-gatherer occupants count? They lived here before everyone else. But the UK didn’t exist then, as an entity or even a separate island. And you won’t find anyone whose ancestors are exclusively the direct descendants of these early hunter-gatherers either.

Both archaeology and our archives have many stories to tell of migration across time. Over the last few decades, we have excavated and studied a number of Early Bronze Age Beakers – the most recent was found in Broadway in 2016. Beakers are distinctive, often highly decorated pots that tend to be found with burials. They give their name to the Beaker, or Bell Beaker, culture that began around 2900 BC in central Europe and spread westwards to what is now Spain, France and Britain, where it arrived circa 2500 BC. 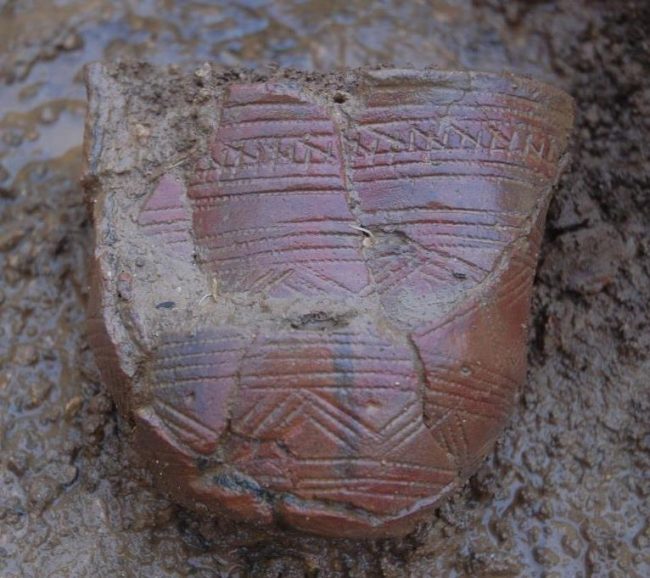 This cultural package, which introduced to Britain new burial rites, objects and materials (such as copper), has caused great debate. Did people adopt this new culture, or does it represent migrant populations? It is difficult to reconstruct the extent to which local communities adopted this new culture and the scale of migration, but it’s almost inevitable that a degree of both occurred. Recent studies of ancient DNA and skeletal isotope ratios certainly point towards mobile populations.

Jumping forward in time to the late Anglo-Saxon era (9th – 11th centuries), another story of migration was unearthed by archaeological works in 2011 around St Mary’s Church, Kempsey. A total of 55 graves at risk of damage during construction were excavated. Oxygen isotope analysis of 12 individuals showed that at least 3, and possibly 5, were migrants who’d grown up somewhere warmer or more westerly, whilst the rest are likely to have grown up nearby. The ratios of strontium and oxygen isotopes (atoms of different weights) in tooth enamel, which forms during childhood, preserves a record of the local environment in which that person grew up. As different teeth form at varying ages, it’s possible to see that several individuals spent part of their childhood in south-west France, the Iberian cost or Mediterranean, before moving.

Migration doesn’t only occur between countries though. During the Civil War (1642-1651), soldiers from across the country fought in Worcestershire and our archives show that some stayed once the war was over.

Parish records from St Helen’s in Worcester show that a George Lawrence preached there after the surrender of Worcester in 1646, replacing the previous vicar Thomas Dennis. Reverend Lawrence is thought to have been a chaplain with the Scottish section of the Parliamentarian army, and was described as “a violent puritan and great admirer of the Scotch covenant”. He stayed and settled in Worcester for at least a few years, as we have a record of his daughter’s baptism.

Historical archives contain a record of many people who have moved around over the last few hundred years. Often this information requires teasing out though, as registers and censuses weren’t made with this purpose in mind. Another difficulty, sadly still a problem today, is that the names of those who have died whilst travelling or as they arrived are not always known. In the case of a couple of Scottish Civil War soldiers though, they are specifically described as such in the burial registers.

Not just today, but every day it is worth remembering that people have migrated throughout history for many reasons. The meeting of cultures and challenging of identities often causes tensions, as well as bringing new ideas and opportunities. Whether you resist or embrace the changes migration can bring, remember that we are all part of a migrant population – it’s just a question of when.