It’s International Lefthanders Day. Roughly 10% of the world’s population are left-hand dominant. But for how long has this been the case? There’s plenty of evidence in the archaeological record to suggest that handedness runs deep in human history. This month, our left-handed Finds Archaeologist Rob Hedge has been looking at prehistoric worked flint from a site in the Lugg Valley.

This area to the north of Hereford lies within the lowlands of central Herefordshire, and has long been a favoured spot for human occupation. Archaeological fieldwork over the last 30 years has revealed a landscape dotted with pits, ditches, and burial monuments: ghosts of later prehistoric occupation.

But there are also scattered finds telling us that roughly 8-10,000 years ago, nomadic groups of Mesolithic hunter-gatherers passed along the river valley. They stopped for a while, and replenished their toolkits. The debris from their flint-working was later carried by floodwaters and scattered within the rich alluvium, into which — at least three hundred generations later — Roman farmers dug their ditches and marked out their fields.

Small fragments of snapped slender blades are common, along with thumbnail-sized, battered lumps of flint — the worked-out cores from which the blades were systematically detached. Apart from the occasional small scraper, finished tools from this period are rare on this site. So we were delighted to find the gorgeous obliquely-blunted point shown below.

These tools are a type of ‘microlith’, a catch-all term for tiny flint artefacts made by snapping small blades. They’re often assumed to be part of composite hunting tools, arranged along the wooden shaft of an arrow or spear as barbs. But many probably served in sickles, knives and grating tools. Obliquely-blunted points are some of the largest microliths. This example is 40mm long, which suggests that it might have been made over 8000 years ago (later Mesolithic examples tend to be smaller). 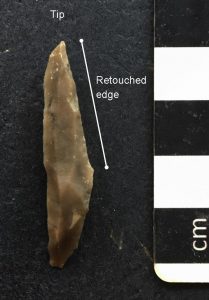 Obliquely-blunted points were made by ‘retouching’ a snapped blade. This was done by removing tiny overlapping chips, in this case spaced about 1mm apart, with the aim of carefully blunting part of one edge. Knappers usually started about halfway down a snapped blade section with the blunted edge running up at an oblique angle to form a sharp tip. When you look at lots of them, you notice something curious: lay them out with the dorsal (outer) surface upwards and the tip at the top, and you’ll see that roughly 90% are retouched along the left edge. This pattern is pretty consistent across different types of microliths, across the UK, and throughout the almost 6000-year span of the Mesolithic. The pattern mirrors the relative proportions of right- and left-handers in human populations today, and it seems clear that right-handers preferred to retouch along the left edge, and left-handers preferred to retouch along the right.

Our obliquely-blunted point is retouched along the right edge, so it was probably made by a left-handed person. Almost 500 human generations lie between that knapper and me, but we’re linked by a shared quirk of the human brain – we’re both lefties, and determined to do things our way! 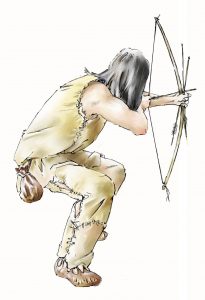