During an archaeological excavation near Worcester city, the team found a lot of evidence of expected urban activity, but two styles of pottery stuck out as particularly striking sitting in the rubble layer above the remains of an older building.

Found above a layer of building demolition material dating from the 1700, one was a group of three highly decorative sherds of pottery (below) and, from the same site, a rare and intriguing piece of Worcester porcelain.

It could almost be Art Nouveau

They are, in fact, early Staffordshire Agateware – possibly a tankard or jug – from the post-medieval period (c.1730-1755).  The name Agateware derives from the agate stone which shows multi-coloured layers in section.

This form of pottery is uncommon in the Worcester area as it was produced in Newcastle under Lyme, Staffordshire with some fine examples having been recorded. Some splendid examples can be seen by visiting the Antique Pottery website.

Aside from the lavish colouring, what is intriguing about this pottery is the process of producing the very thin laminated form. 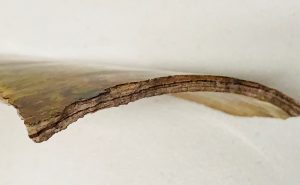 This piece is 1.5mm thick and, as the clear laminations show, it was made from different pieces of clay.  The colouring was added in powder form (to avoid blistering) to separate pieces of clay before it was folded and moulded into layers as described in “How to Create Agateware Pottery Using Coloured Clays and a Plaster Press Mold” by M. Erickson and R.Hunter – the Ceramic Artists Network.

This form of pottery was made using techniques similar to elsewhere in the world.

On the same site as the Agateware, was a very nice sherd of early Worcester porcelain from the base of a cup/tea bowl.

Interestingly, this piece had been re-worked into a miniature saucer at some point, possibly following a breakage, suggesting it was of particular importance to the owner.

Dr. John Wall, a local entrepreneur, together with his apothecary friend William Davis discovered a way of making porcelain type material and was the driving force behind setting up a new factory at Warmstry House in 1752.
You can read more about workers and factory owners at The Museum of Royal Worcester website.

A hundred years of pottery heritage

So, what was an unremarkable day for our archaeologists revealed a remarkable pocket of Worcester heritage within a few square metres.

A sherd of 18th century local Worcester Porcelain pottery, lovingly and sustainably re-worked, near sherds of brightly coloured 18th century Staffordshire Agateware that was uncommon in Worcester both found above the rubble of a 17th century structure – probably a tannery by the profusion of horn core and bone – within the city walls and close to the future canal.

In what was an industrial estate of the time, the 17th century tannery would have sent horn and bone to the 18th century Worcester Porcelain factory which may well have produced the porcelain that was found.  The same factory being where the head of the decorating department of Worcester Porcelain factory (Robert Chamberlain) was possibly working with a decorator of Staffordshire Agateware inspiring designs for his porcelain decorating factory established in Kings Street, Worcester in 1783.

Two wonderful pieces of pottery, outstanding for their own reasons, brought together in one Worcester city archaeological site.

The new Archive Card reader’s ticket has now been launched and we will be issuing them at WAAS from next week, so head online to www.archivescard.com for more information and to sign up for yours today before you visit. For the last few years a new reader’s ticket scheme has been under development by the...

Worcestershire Archaeological Society (WAS) has received a National Lottery Heritage Fund grant of £62,700 for an exciting county-wide archaeology project – Small Pits, Big Ideas II. Made possible by money raised from National Lottery players, the project will enable six rural communities across Worcestershire to explore the origins of their settlements and contribute to academic...