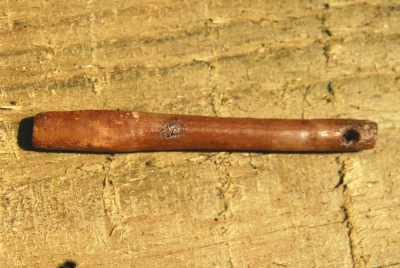 Back in the summers of 2005 and 2006 we ran community digs at The Commandery. As well as it being a great dig, uncovering remains of the 13th century chapel with 15th century extension and some fascinating finds, it was also memorable because around 90 volunteers took part, inspiring some to study archaeology, proving important experience for those seeking to become professional archaeologists, and inspiring interest in archaeology for others who are still members of local groups. The public were also able to come on open days and view as part of their visit to The Commandery, and along with media coverage it was one of our high profile digs. 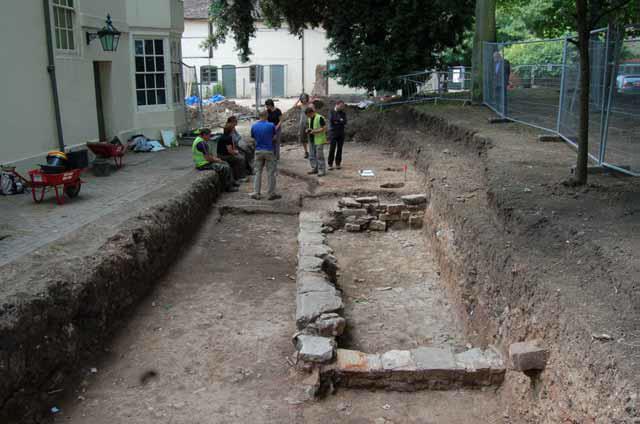 In 2005 The Commandery was awarded money from the Heritage Lottery Fund for refurbishment. As part of this project James Dinn, City archaeologist for Worcester City Council, commissioned us to do archaeological investigations. Some of this was included as part of community engagement for the project by running community excavations for volunteers over the summers of 2005 and 2006. Around 90 people signed up, from teenagers to retired people, learning new skills and playing their part in the dig and the uncovering of the story of The Commandery

The Commandery was originally the Hospital of St Wulstan (Bishop of Worcester 1062-1095), founded on the orders of Wulstan just outside one of the city gates, for pilgrims and as a hospital/almshouse for the poor and sick. The first written reference came in 1240 in the Miracles of St Wulstan, with a story of the healing of Thomas of Eldersfield.

After the dissolution of the monasteries The Commandery was sold to the Wilde family, clothiers, who used it as a family home. It was later split into several houses, before conversion into a school for the blind, and used by Littlebury’s as a print works in the 20th century. Then in 1977 is was opened as a museum, which it still is today.

The site has had a varied history, one which the museum would be telling. The archaeological dig had a number of research questions which we aimed to answer about the history of this site and this part of Worcester, which incorporated these periods, as well as seeing if there was any earlier evidence. 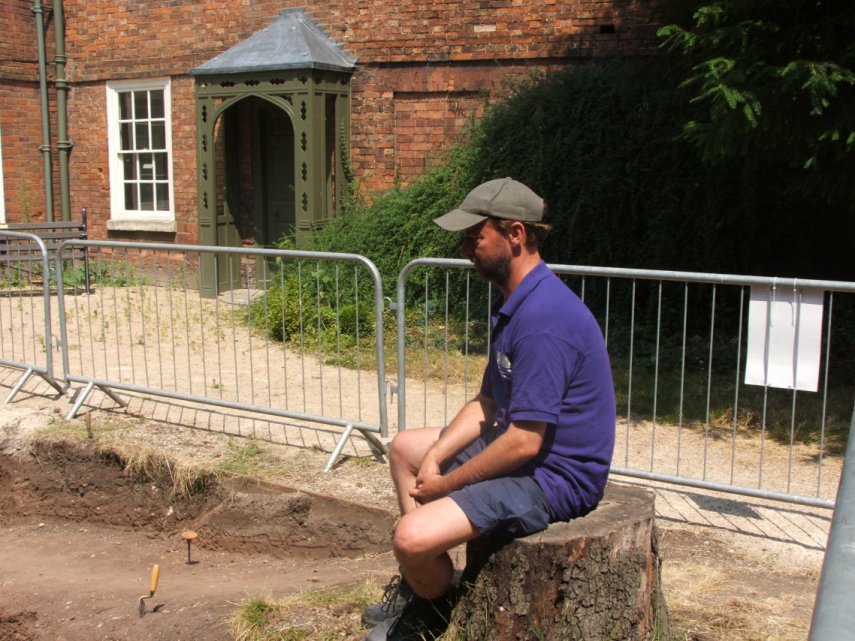 Justin Hughes, who co-directed the 2006 dig season with Darren Miller (who also led the 2005 season), recalls the dig well. The most tantalising part of the site he remembers was the medieval chapel of St Godwald, an obscure Cornish/Welsh saint, but one whose name was attached to the chapel here, and whose dedication may indicate its early origin. The exact site wasn’t known, and it had been hoped to find it in 2005 but without success, so they tried again 2006 and found it. A lot of wall footings were uncovered with green sandstone, from the same quarry at Highley used for Worcester Cathedral. We even got mason marks on some of the stone blocks. It was very exciting, and the archaeologists and volunteers from other trenches would pop over for a look at breaktimes to see the progress as more walls emerged. 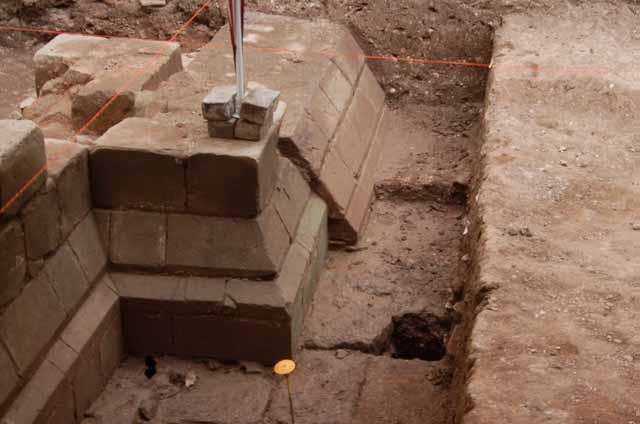 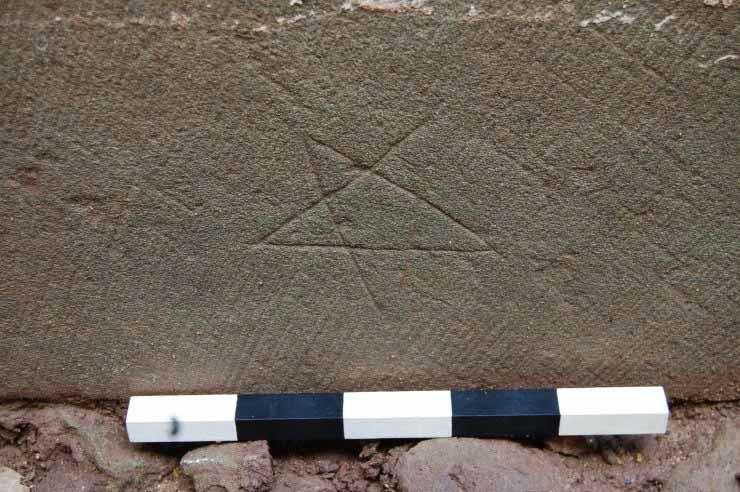 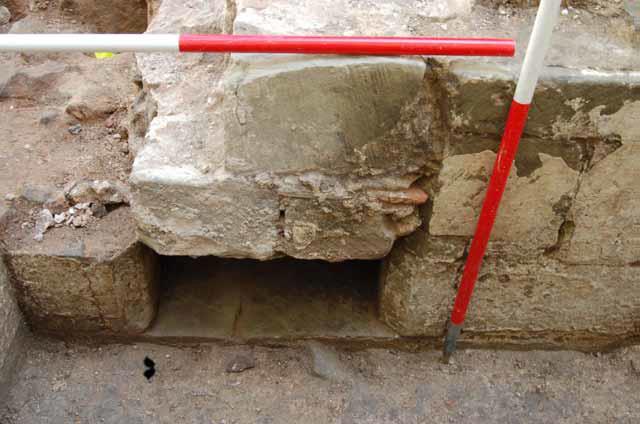 Recess or aumbry in east wall of chapel

Other trenches were a bit more speculative, sited in different areas to check out any evidence showing how the site may have developed. Although the chapel trench turned out to have found the chapel remains as hoped, a nearby uncovered next to no traces of buildings trench after six weeks of digging. Fortunately the volunteers who were assigned this one appreciated that absence of archaeology can be just as useful as they kept digging and finding very little and it became a running joke!

There were a number of lovely finds uncovered over the two seasons. Justin’s favourite was the tuning rod, possibly for a lute. There were also some lovely medieval tiles found, including one with a dragon (or wyvern) on which was used as a logo for lots of events and on our reports over the next few years. 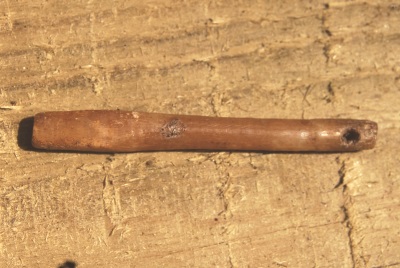 Overall the excavations produced important new evidence relating to the medieval hospital, and to later buildings and garden features. In particular, the excavations exposed parts of eight medieval buildings, including the east end of the hospital chapel, and the corner of a possible hall. From this and other evidence, it seems that the hospital was partly rebuilt in the 14th century, and almost completely rebuilt in the late 1470s. Later discoveries included parts of three unmapped buildings, a garden path, and an ornamental water feature. The excavations also produced a wide range of artefacts, including decorated medieval floor tiles and fragments of medieval windows or arcades. 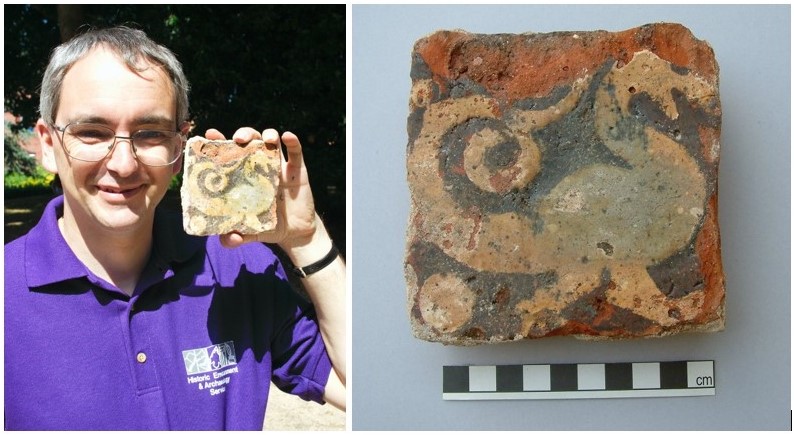 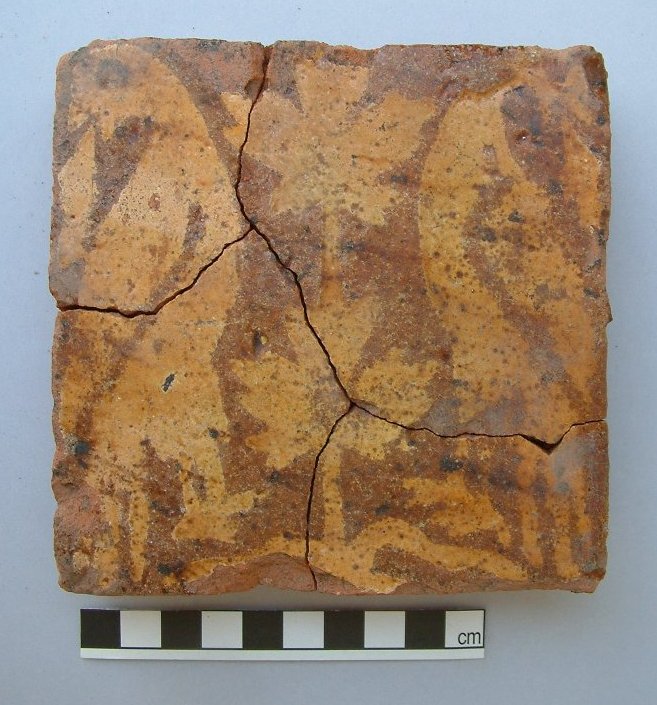 Medieval tile showing two pelicans between two leaves or trees. Identical tiles in Worcester cathedral in a floor dated to 1377.

One incident Justin recalls was flash flooding one night. As they returned next morning a 100 foot garden curtain wall, which contractors had just put up, had completely collapsed. It also caused the flooding of one of the trenches which became known as the ‘stench trench’. Almost as important it also caused flooding at The Barley Mow, the regular haunt of archaeologists and volunteers after each day’s exertions and led to its closing!!!

One of the big achievements of The Commandery, which makes it stand out as an memorable dig from the past 50 years, was the volunteer programme and public profile of the dig. An important part of HLF projects is public engagement, getting people involved, increasing their knowledge and appreciation of the local heritage and learning new skills. The archaeological work was a great opportunity to get more people involved. We know lots of people always want to have a go at hands on archaeology, but there are few opportunities. The Commandery project provided a rare opportunity for this. We had lots of applications, which was great, and around 90 people took part over the two seasons. Some could just manage a week, others a lot longer. Community digs are usually great experiences, and this was no different, and Justin recalls the great atmosphere with enthusiastic volunteers throwing themselves into the hard work of excavation and the camaraderie at tea breaks and post-dig visits to the pub. 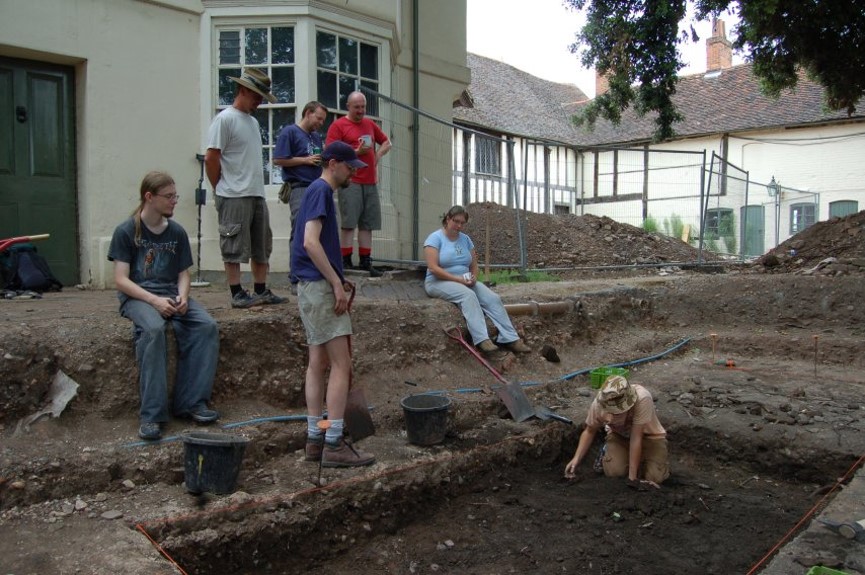 Volunteers in trench one. In here evidence of medieval timber buildings were uncovered, stone post-medieval buildings, and later landscaping.

As part of the Festival of Archaeology an open day was run in 2006, with Julian Richards, known for TV programmes such as Meet the Ancestors, which was very popular. We also had close links with local media, with regular updates given to BBC Hereford & Worcester and Worcester News throughout the dig. 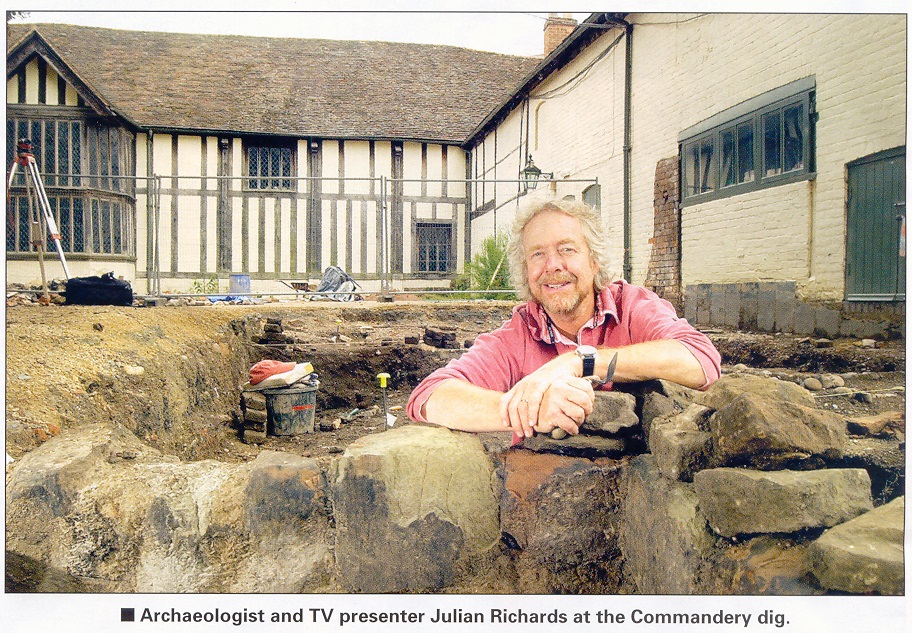 Justin recalls many of the volunteers going on to build on their time with us. Some got their first taste of archaeology, and are now part of local groups, and attendees at our Archaeology Day and other events. Some have been inspired to study archaeology, and others used it as important work experience. Justin still bumps into people who were involved, and the significance of the dig is shown how readily people remember it and reminisce. 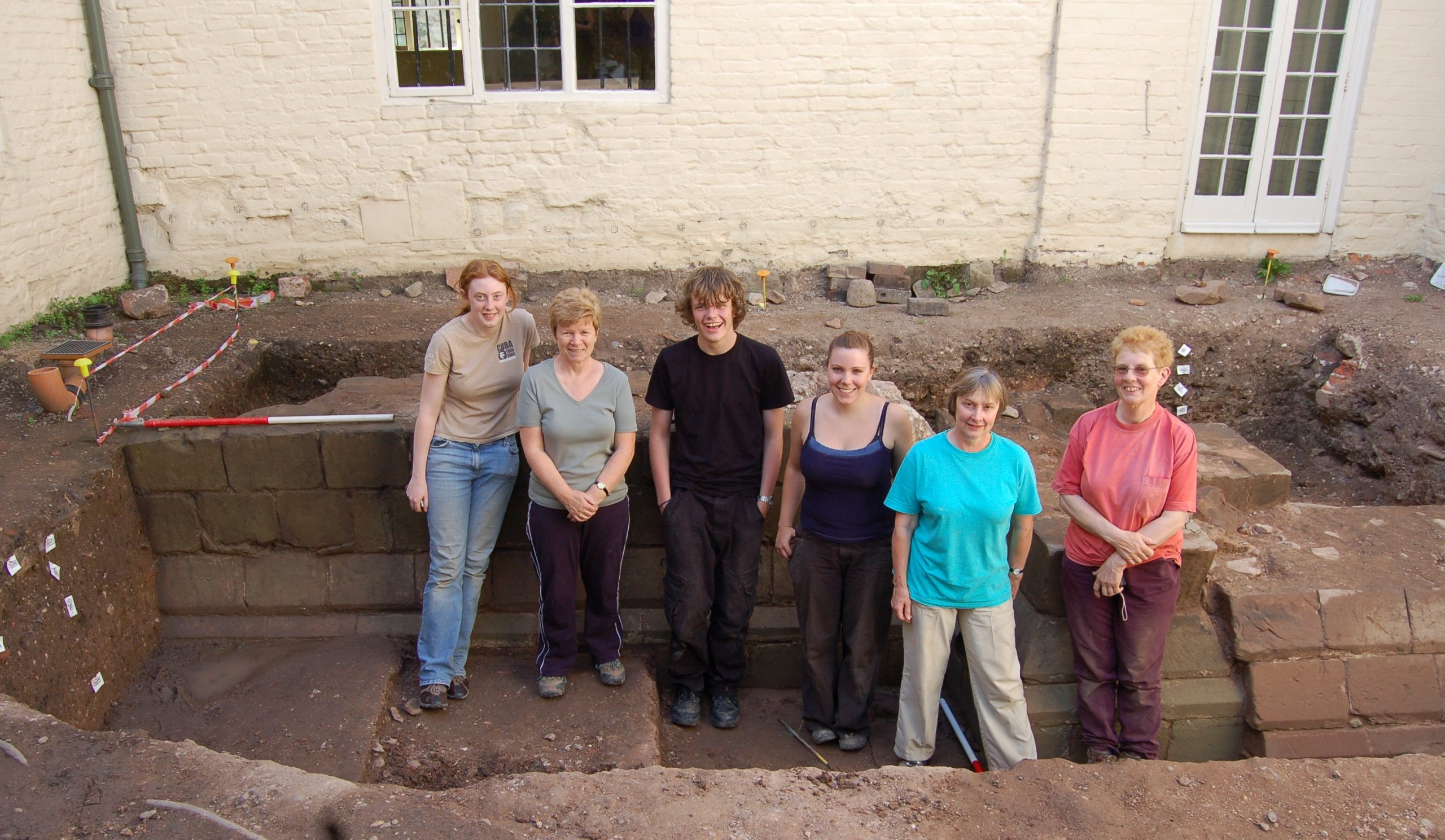 The volunteers who uncovered the medieval chapel

Two of our current staff members were volunteers in 2005, Tegan Cornah and Hazel Whitefoot, so we asked them a bit about their experiences.

“It was during the summer before starting my 3rd year of my Ancient History and Archaeology BA degree at Leicester University. From what I remember there was a call for volunteers. I remember watching someone doing dowsing across the Commandery lawn and marking out features that apparently cut across the entire site, I think it was supposed to be a Roman ditch, but there was never any evidence of it. I remember excavating in Adam’s trench that was just the other side of the tow path and he taught me how to fill in context sheets, record soil and deposit types, colours, etc, excavating in Darren’s trench that was in the courtyard, that’s were we found that nice medieval floor tile (with the two birds on either side with something streaming out of their beaks and a design underneath them), learning how to do hand drawn scale section and trench plans with Darren and doing finds washing with Angus and all the other volunteers when it rained. I remember working in a trench at the back of the Hall with a former member of WAAS and it was him, Darren and Angus who told me to get more field work experience (I did another season of university digging the following summer, but couldn’t take part in the second season at the Commandery as I had to work) and then apply for a casual Archaeologist position when they came up from what was WHEAS back then. I applied just before graduating in May 2006 and my first job was with Tom Rogers at Bath Road in August. A 2 week casual contract turned into a 3 month, 6 month then permanent position for the next 6 and half years.”

“Opportunities to take part in an archaeological dig are few and far between if you are not lucky enough to be ‘in the trade’ but a visit to Chedworth Roman Villa and a leaflet offering the chance to spend a couple of days digging at the villa gave me my first chance to get my hands dirty after many years of having a fascination with all things archaeological.

When the chance to apply for a place on The Commandery excavations came up I filled in the form not really expecting to be lucky but I do clearly remember bouncing up and down like an excited child when I received the letter to say I had been successful!  I think I did a few days there and the photo was obviously very skilfully taken as, somehow, I look like I know what I’m doing!

These experiences gave me the ambition to get more involved and in 2003 I started a part-time undergraduate degree in Archaeology & Heritage, by a Masters in Applied Landscape Archaeology.

A stint on the Butts dig came in 2008.  Mixed weather on that dig meant that I got to have my first go at finds washing and thereby encountered another part of archaeology that was so interesting to do.  So, after completing my undergraduate degree, I started volunteering in the finds dept of WAAS and I’ve washed a LOT of pottery and bone since then!

In the end (after 12 years and quite a lot of applications……) I finally got my shiny new job when I was taken on by WAAS as a trainee field archaeologist.   Although I think they probably only really did it because they were fed up with me applying for things, I remain so grateful that they did as I really do work with the best bunch of people doing the best job in the world!” 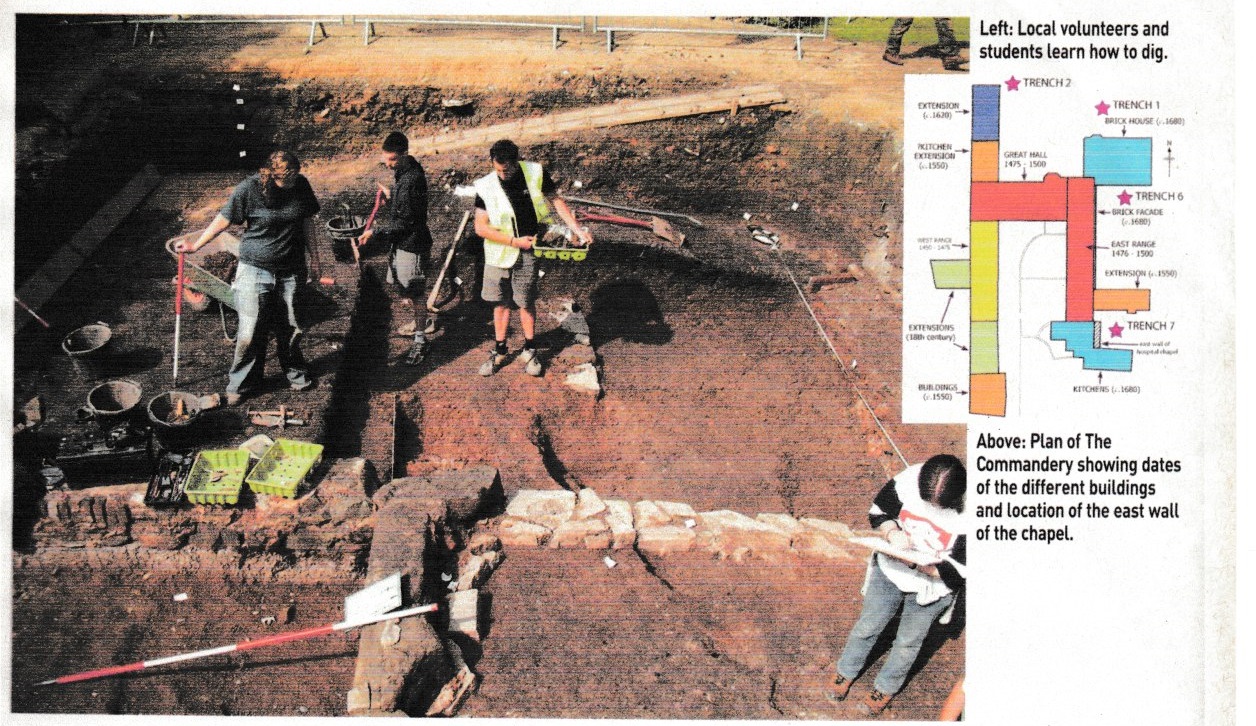 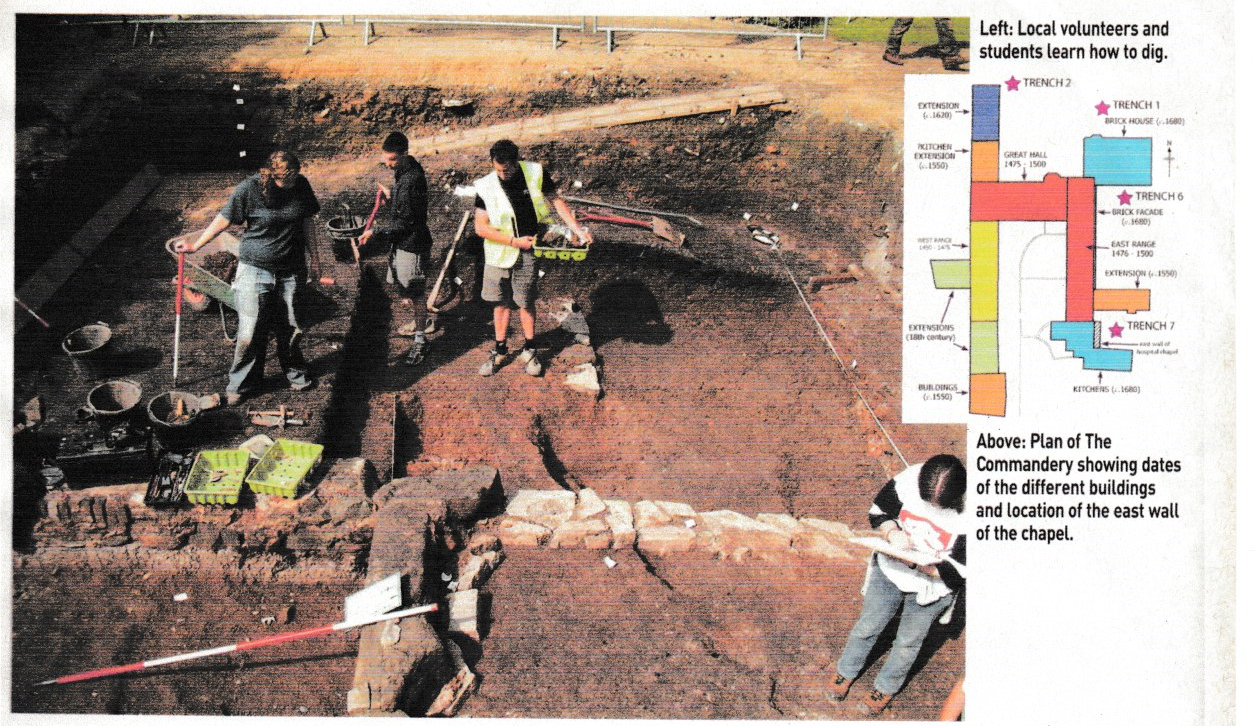 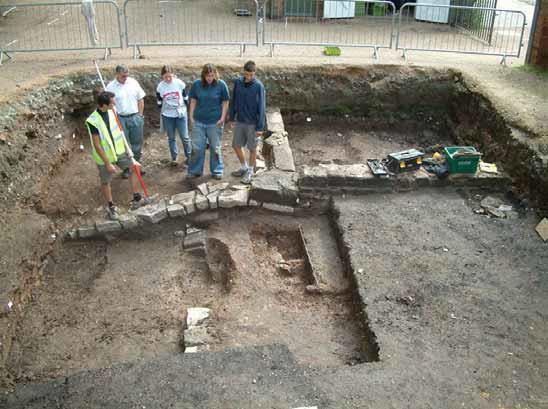 Trench 2:corner of Phase 4 building (with Hazel in centre)

The Commandery is starting to reopen after closing for Covid-19, like other museums. Check out their website for news about visiting details. 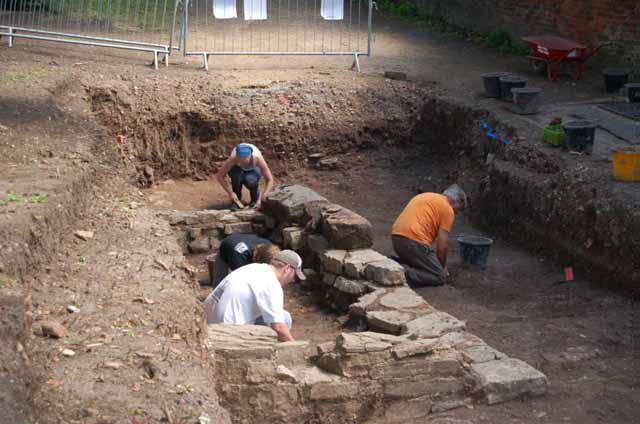 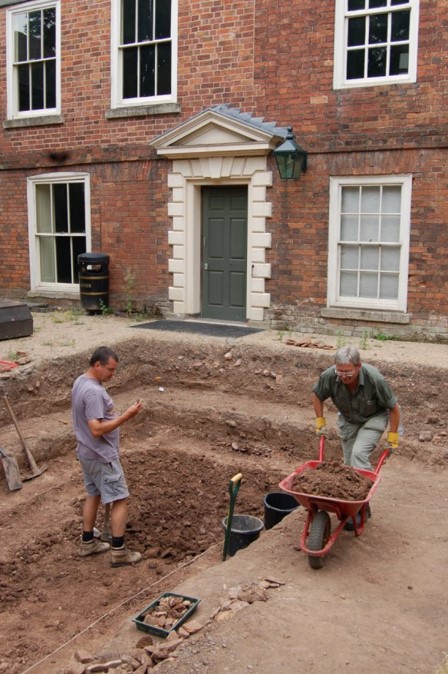 After 6 weeks this trench sadly didn’t reveal much, despite the best efforts of the volunteers 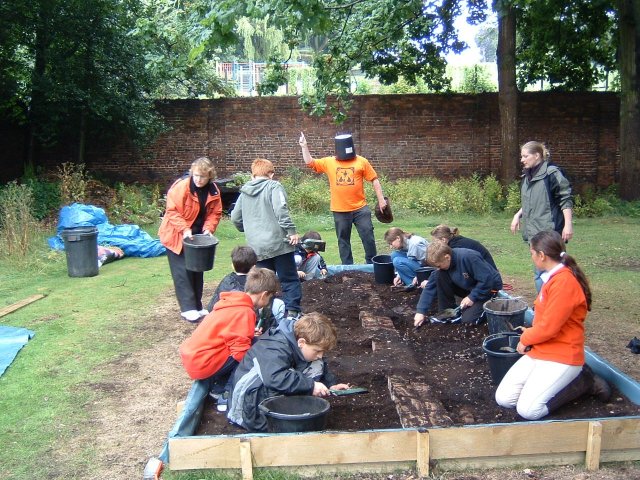 Worcestershire Young Archaeologists Club came to visit each summer. They had a go at a mock excavation trench, and also had a go in one the real ones too