The Thinning of the Wildwood?

Fascinating stories are found in the smallest of archaeological clues: charcoal and pollen. Recent analysis of a Bronze Age burial site at Meriden, in the West Midlands, illuminates this prehistoric landscape and the choices made by our ancestors 3,500 years ago. To kick off this blog series, our Environmental Archaeologist, Liz Pearson, sets the scenery – literally! 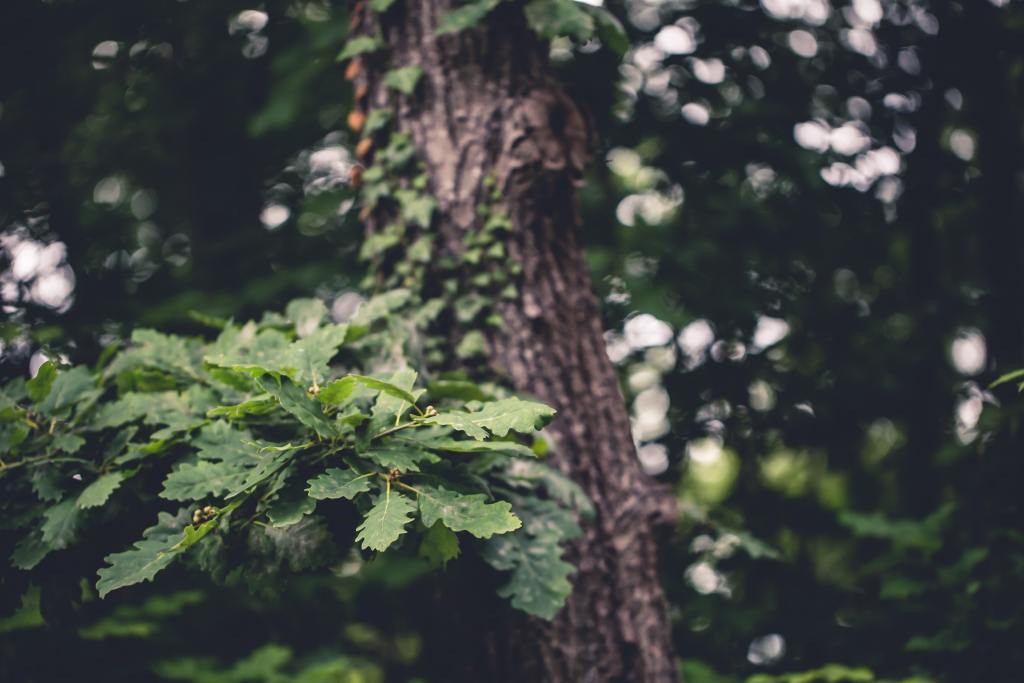 Photo by Tim Stagge on Unsplash.com

Spring is here and the oak is pushing out new growth from just underneath its rough, dark bark. Cells are dividing fast along the length of the trunk and the branches: tubular vessels and other cells suck up water and minerals from damp soils beneath, and out through the newly emerging leaves. Vessels (the transport system) at this time of year are large, making the most of the available water and nutrients. A necessity; if it weren’t for decaying leaves and small animals over many years, the sandy soils here would be very poor indeed.

By mid-summer barely any new wood is forming, and that which does carries narrow vessels, leaving behind dense wood. It’s been a consistent pattern for many years, seen in the oak trees in this area, like a fingerprint. Year after year, the trees lay down growth rings with wide vessels of early wood growth contrasting with almost no late wood growth. One ring after another. The local environment affects their growth, as a network of fungal threads spreads like a web of telephone wires connecting the trees, communicating the prevailing climate, water availability, the coming of bark-chewing deer and clouds of insects.

From Tree to Pyre to Charcoal

The coming of bark-chewing deer was predicted via the fungal telephone network, but not a small group of people with a bronze metal axe. Every so often, people living around here fell an oak or two. They stack the wood and gradually burn it on household fires. But sometimes they keep a stack of oakwood for longer, for a special purpose.

They keep it for the burial of their dead: for the pyre upon which the body is laid and burnt. After the pyre burns out, they collect cremated remains of the body and place them in a sack, an urn, or directly into a pit. They cremated their dead here sometime between 3,600 to 3,400 years ago. This is the middle Bronze Age. 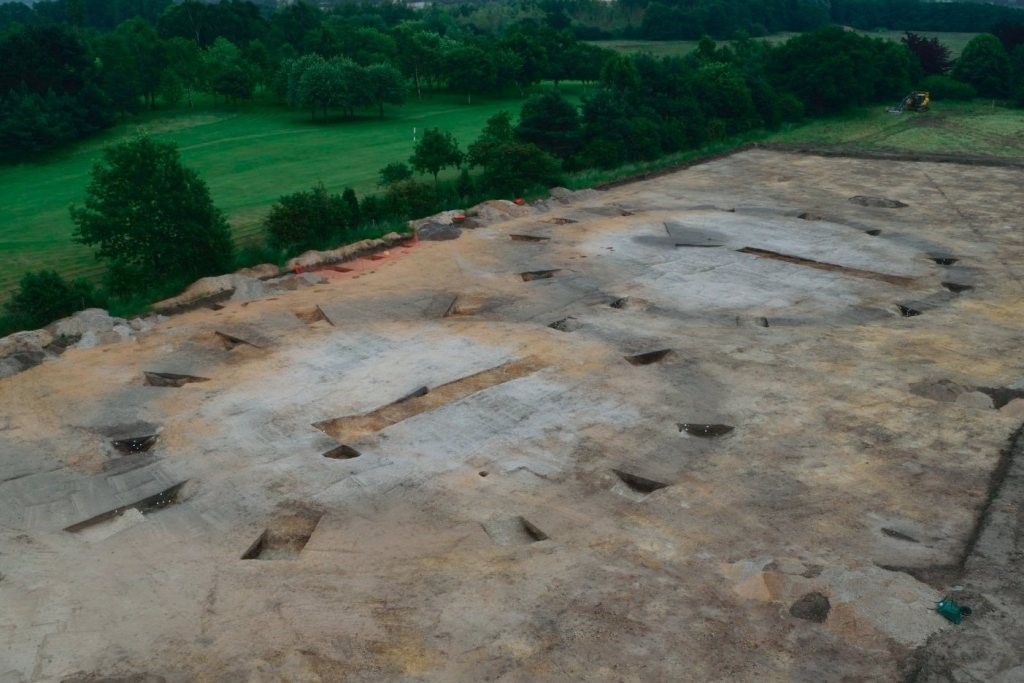 Fast forward to 2014 and what do we see? We’re at the former Tarmac quarry near Meriden, Solihull. Worcestershire Archaeology field staff have just monitored the machine stripping of a large area of topsoil over a field that is to become an extension to the quarry. Two large ring ditches (30 metres across), and part of a third are revealed – remains of Bronze Age barrows: burial mounds surrounded by a circular ditch.

Archaeological investigations focus on the northern and southern rings, in the centre of which are layers of grey ash and charcoal. We believe people burnt the ground to cleanse it before building a monument to the dead, leaving behind a layer seen in many heathland barrows. Amongst the charcoal are residues of cremation pyres. 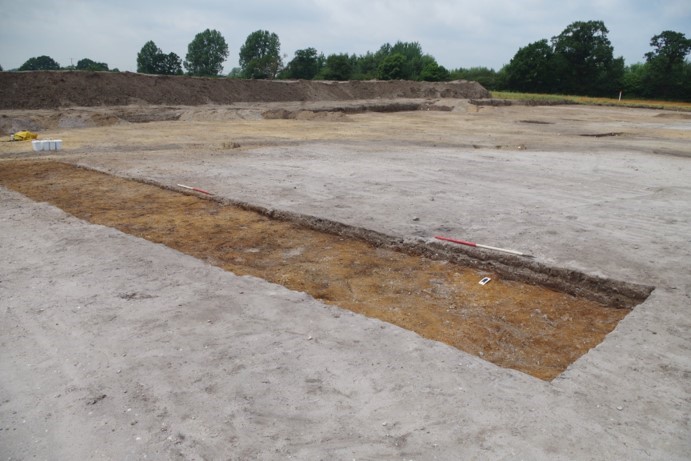 Ash and charcoal in the centre of the northern round barrow

Archaeologists sieve the charcoal laden soils on site, then take samples back to the office for processing by flotation, where water tanks are used to separate light organic material from the soil. This is the start of a long process of analysis and reporting, which will finally come together in 2020. One of the stories that has emerged comes from the consistent pattern of tree growth rings seen in the charcoal debris.

What do the growth rings mean? We know that trees growing in dense woodland form this pattern of good spring growth followed by little summer wood. Yet, the middle Bronze Age is a time when, countrywide, settlements are growing and people are opening up the forests faster than before. Our unusual results seemingly fit with the story from pollen found in wet peat alongside a nearby brook. Pollen shows us that around 3,500 years ago dense woodland lined the brook. Mostly the trees are alder, and to a lesser extent, oak, birch, pine, lime and elm trees. Oak is likely to be growing on slightly higher, drier ground – perhaps close to the round barrow cemetery.

There’s birch from small branches too in the pyre debris. Birch; a pioneer and lover of more open spaces. So, how dense are the woodland thickets that our settlers wander through to collect wood for their dead? It’s unlikely that we’re looking at pristine wildwood: we’re talking wildwood in a more general way. The process of interpretation means darting between different strands of evidence.

We have another strand of evidence to consider. At the time the cremation cemetery was in use, up in the hills, the surface of bogs were drying out. It was a phase of reduced Bog Surface Wetness. Down on the lowlands, our Bronze Age mourners dug their ring ditches through free-draining soils into a thick layer of sand beneath. In 2014, once we removed the topsoil, it was like walking on a dry, sandy beach.

Drought is another factor that can cause the particular growth pattern we see in the charcoal at Meriden. During dry summer months, could it be that woodland trees suffered from drought, as much as bogs suffered drought up in the hills? The pollen sequences show fluctuating levels of wetness and dryness, and the lifespan of the cremation cemetery does indeed coincide with a drier phase.

Well-seasoned oak burns slowly but at a high temperature – an ideal pyre timber. People connected to the Meriden barrows piled up local oakwood, and in time insects moved in and set up home. They bored and burrowed, chewing up wood in their wake, leaving behind small holes and tunnels. Fungi joined the party, their branched hyphae threading their way around the damage left by wood boring insects.

We know that this Bronze Age community stacked up and seasoned oakwood, as we can see clues left behind in the charcoal spread across the northern ring ditch. Insects and fungi, which like seasoned wood, left behind tunnels and holes to be preserved in perpetuity, even after the pyre collapsed.

Mixed in with the seasoned oak were fragments of smaller birch branches – a wood that burns fast with a hot flame. Perhaps they used this as kindling for the pyre, leaving behind a birch residue?

So, the charcoal we see today is partially a record of the intentions of past people, and partially an echo of past climate and environment. Are we looking at the thinning of the wildwood, or years of summer drought, or both? More remains, giving us more data, will help to fill in the details.

Temperature and rainfall rose and fell in cycles in the past. But today we’re looking at an acceleration of those cycles because of our modern, industrialised lifestyle. What story will be written in the growth rings of trees alive today? Of the next hundred years?

Animals as well as people populated this Bronze Age world. Their presence also left its mark on the woodland and amongst the cremated remains of the dead. More on their story in Animals & Ancestors: Bones from the Pyre.

Animals & Ancestors: Bones from the Pyre

What do animals mean to you? For our second blog in the series about Meriden’s prehistoric landscape, we explore the tale of two Bronze Age burials, their unusual choice of animal companions and relationship with the land.

Tales from a Prehistoric Landscape

Looking for an overview of the archaeology at Meriden Quarry? This online talk, given for the Festival of Archaeology 2020, runs through the whole human story written across this incredible landscape – from Mesolithic campers to a trend setting Neolithic community, the sorrow and love of Bronze Age mourners, then the arrival of Iron Age landscapers.

On the 15th August we mark the 75th anniversary of VJ Day, Victory over Japan Day, when the Japanese forces surrendered to bring an end to the Second World War. We have brought together an online exhibition to commemorate the event, looking at Worcestershire’s connections to the war in the Far East, and how Worcestershire...