On 12th December 1901 Italian radio pioneer Guglielmo Marconi and Cardiff-based Post Office engineer George Kemp succeeded in broadcasting the first transatlantic radio transmission. By 1914 there were commercial, post office and admiralty radio stations across the UK. Although none of these were in the West Midlands there is evidence of experimental transmissions, by the military, in Worcestershire, using mobile transmitters/receivers (Jones, Lowry and Wilks 2008, 29). By 1920 the idea of wireless broadcasting for entertainment was gaining traction and in 1922 the British Broadcast Company (BBC) was established and regular daily broadcasting on medium waves began (Philips 1994, 3).

On 1st January 1927 the British Broadcast Company was granted Royal Charter, becoming the British Broadcasting Corporation. ‘And whereas in view of the widespread interest which is thereby shown to be taken by Our People in the Broadcasting Service and of the great value of the Service as a means of education and entertainment, we deem it desirable that the Service should be developed and exploited to the best advantage and in the national interest’ (History of the BBC: BBC Royal Charter archive).

The Droitwich Transmitting Station, in Wychbold, was set up in 1934 as a National (long wave) and Midland Regional (medium wave) transmitter; the Midland Regional medium wave service was transferred from Daventry. Wychbold was chosen for its central location which enabled it to serve most highly populated areas, eliminating the need for as many infill transmitters (Philips, 1994, 6). The transmitting station was the work of L. R. Guthrie of the London-based architects Wimperis, Simpson & Gutherie, who had designed Fortnum & Mason in 1925 and Grosvenor House in Park Lane, London the following year. Exponents of modern architecture, the Droitwich transmitter employed brick and Portland stone (BBC Media Images). 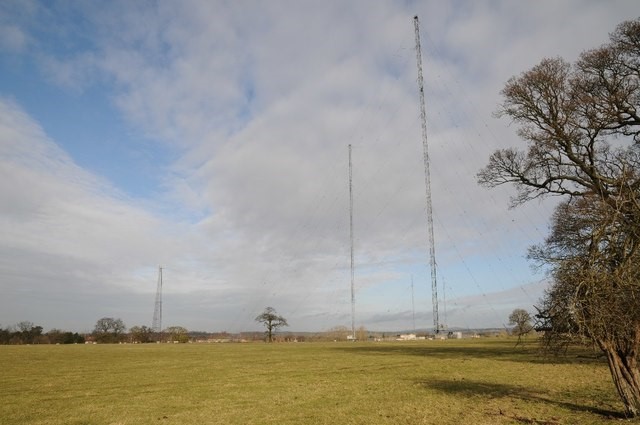 The two radio masts associated with the Droitwich Transmitting Station, in Wychbold, are a prominent and local landmark. © Philip Halling and licensed for reuse under this Creative Commons Licence.

At the outbreak of World War II, on 1st September 1939, all transmitters, including the transmitter at Wychbold, were ordered to close as transmission moved over to an emergency wartime broadcasting system. It had been decided that only one programme would be broadcast – regional programmes were not reactivated until 29th July 1945 – the emerging TV service also ceased for the duration of the War (Jones, Lowry and Wilks 2008, 29). New low-power transmitters were constructed throughout the country – to support short and medium wave broadcasts that could not be so easily intercepted by enemy aircraft including the first parallel-operating medium-wave transmitters at Wychbold – that, as well as the National Programme, transmitted programmes in a variety of European languages as well as the Voice of America (Philips 1994, 15).

The threat of bombing and later invasion encouraged the BBC to relocate many of its services from London, including to Worcestershire. Wood Norton Hall, near Evesham, being just one of several buildings purchased (as in the case of Wood Norton) or requisitioned in the county, for communications use. New temporary buildings were swiftly erected to accommodate both operations, which included monitoring, and staff. Wood Norton would also have played a significant role, in the event of a nuclear attack, during the Cold War.

The West Midlands was also central to the development of wartime radar, which was driven by the need for an early warning system capable of recognising enemy aircraft. In 1942 much of the Telecommunications Research Establishment (TRE) and the Air Defence Research and Development Establishment (ADRDE) had moved in and around Malvern. In 1943 a large purpose-built Engineering Unit was constructed for TRE, off Geraldine Road in Great Malvern, to expand the production of operational radar equipment. A hostel to accommodate staff was built nearby. Although most of the Engineering Unit has since been redeveloped, a communal building has been retained as part of the Chase High School (Jones, Lowry and Wilks, 2008, 16).

The establishment of a state-operated telecommunications network in the late 19th century led to widespread development of buildings by HM Office of Works (from 1940 the Ministry for Works, and from 1962 the Ministry of Public Building and Works) as well as a more standardised approach to design (Historic England 2017, 8). The National Telephone Company was taken over by the General Post Office in 1912, who adopted a neo-Georgian house style, in use until the 1950s. As the use and availability of telephones grew, more and more exchanges were built, initially in neo-Georgian styles but later (from the 1960s) in more modern ‘Brutalist’ designs, since they didn’t need huge numbers of windows for natural light. Although an exchange could form an extension to a Post Office, they were, in general, erected as stand-alone buildings. 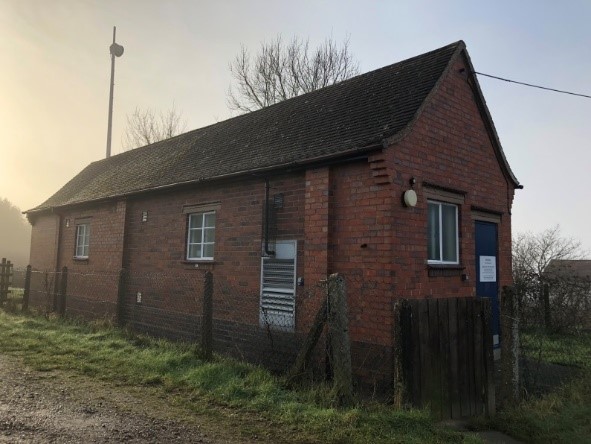 This small rural telephone exchange next to the Victory Hall in Clows Top is one of several post-war rural exchanges dotted around the county.

From the 1960s telephone exchanges were built across the county to ensure the best connection for existing and emerging industry in the new technological age. This is particularly noticeable in Redditch where telephone exchanges were constructed in many of the newly developed districts to attract new technology-led companies to the area; low rates, a well-connected road network and a pleasant, green landscape were all additional draws to industry (Winter, 1993). The British Information Technology Company ISTEL, formerly BL Systems, and latterly AT&T Istel, was one such company that set up their headquarters in Redditch. Formed in 1979, the company was created through the merger of the computer departments of several automotive companies, bought together under British Leyland. 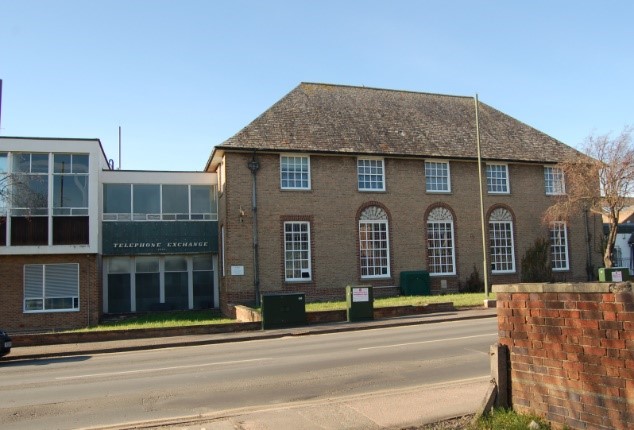 The telephone exchange on Abbey Road, Evesham was built in two phases with the earlier phase constructed in 1935 and the later phase added in 1958. Evesham is recorded as being the second place in the UK to have subscriber trunk dialling; telephone communication being integral to the local market gardening industry (Brotherton, 2016) 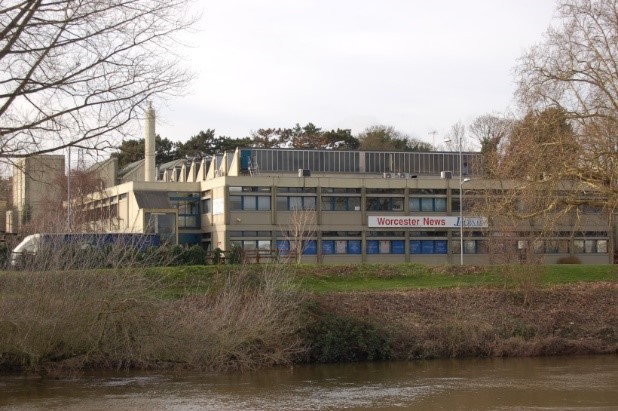 Berrows House in Worcester, designed, in 1963-5 by the Austin-Smith, Salmon-Lord Partnership, is an interesting example of a Brutalist style. The office building, formally of the Worcester News, has a steel frame encased in concrete with a central paper store and printing hall above. 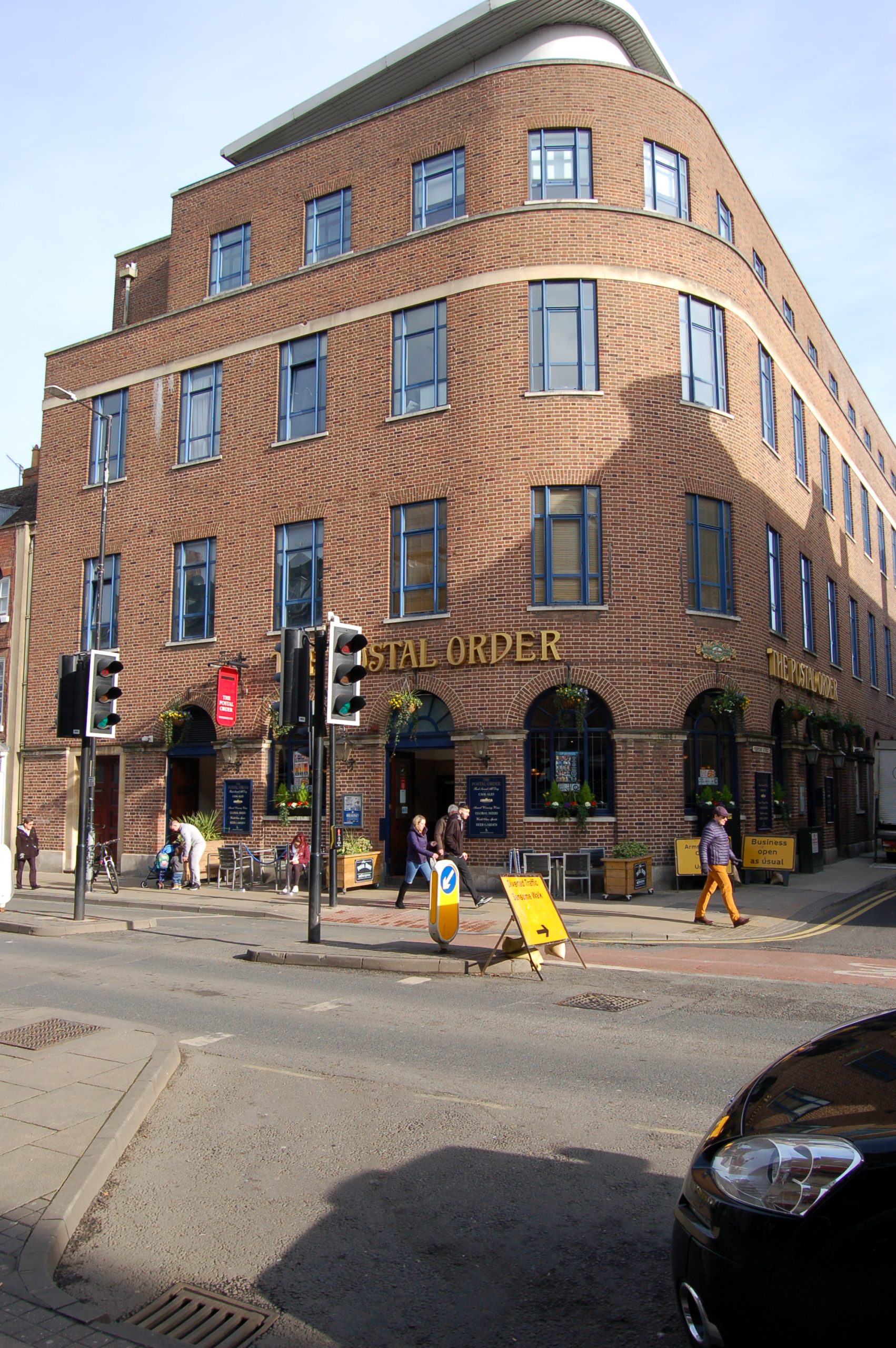 The Postal Order public house, on Foregate Street, in Worcester is a former telephone exchange of circa 1930.