Look what we found

Our archaeology unit was digging in a really small sub-urban area surrounded by agricultural lands in the south of Worcestershire when a sharp-eyed field archaeologist spotted an incredible find …an ancient piece worked flint. 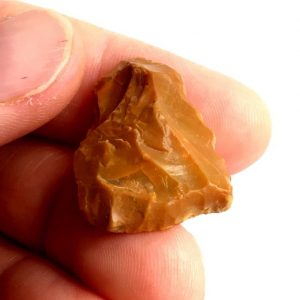 You might think that finding a flint shard is not that uncommon and on some sites that may be true, but this area and this piece of flint is, in fact, a 3cm flint scraper and opened up an incredible background from around 60,000 years BC.

What makes this so special?

Around 800,000 years ago Britain was joined to continental Europe by a wide land bridge.  There is evidence of Neanderthal humans living in Britain from around 60,000 BC – our worked piece of flint turned out to be possibly Neanderthal from the Palaeolithic period.

What do we know about it?

In a previous post, “What’s the point” our finds archaeologist, Rob Hedge, had been looking at prehistoric worked flint from a site in the Lugg Valley, well he’s still at it only this time for our flint in south Worcestershire, close to the River Avon.

You can see from this 1st edition OS map of the area that it was quite a flat piece of land and subsequently the 1833 Enclosure map that nothing had changed in the landscape.

Being flat and close to a river, the hunting and fishing would have made it a really good location for a settlement – even if temporary.

The flint was found in a patch of disturbed gravel, brought to the surface where a tree had fallen.

The edges are slightly rounded: it’s been around a long time, possibly very lightly rolled in a river. The deep orange patina is something we only see round here on very old artefacts. 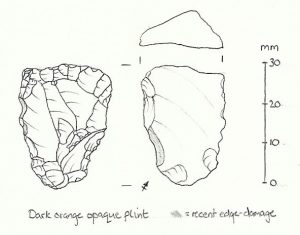 It seems to have been made on a fairly crude flake with the sand gravel deposits on the site being part of the 2nd Avon Terrace, huge banks of sand left high and dry by the shifting Avon as it cut deeper into the soft underlying mudstone will have dulled the original edge. 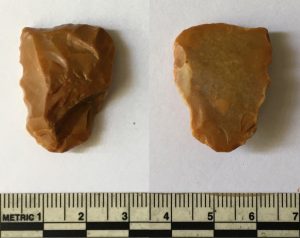 It seems to have been made on a fairly crude flake with the sand gravel deposits on the site being part of the 2nd Avon Terrace, huge banks of sand left high and dry by the shifting Avon as it cut deeper into the soft underlying mudstone will have dulled the original edge.

Those deposits (part of the Wasperton member), formed 82-14,000 years ago during Marine Isotope Stages 5a to 2, alternating cycles of warmer (MIS5a, MIS 3) and colder (MIS4, MIS2) conditions. They are renowned for yielding artefacts from the sporadic human presence during MIS3

During this period, 57-29,000 years ago, groups of Neanderthals came back into this area after a 120,000 year absence. Sometime around 40,000 years ago, modern humans arrived on the scene. Artefacts from both have been found in Wasperton gravels around Bredon Hill

So, who made this?

“…it’s similar to Aurignacian scrapers made by the earliest modern humans, 36-29 thousand years ago, but most of those are made on carefully prepared blades, whereas this is not”.

“We need to have a close look at the gravels to see if we can refine dating.”

A small flint shard with such a huge story to tell after all this time. Well spotted by our archaeology team and what extensive information from our finds’ archaeologist Rob Hedge.

Was it Neanderthal or early modern human? There is still more to discover about the inhabitants from this little piece of flint.

You can read a more of the period and the remarkable work of Dr Mabel Tomlinson, who set out from Birmingham to tour the Avon by bicycle, and produced some extraordinary work along a full-time teaching career, in our Discovering Ice Age Worcestershire

As earth’s deep history and the evolution of species began to be debated and slowly accepted, researchers within Worcestershire started to investigate the particular history and geology of this…

Thanks to our archaeological team and our flint specialist Rob Hedge for this.  We look forward to finding out more.