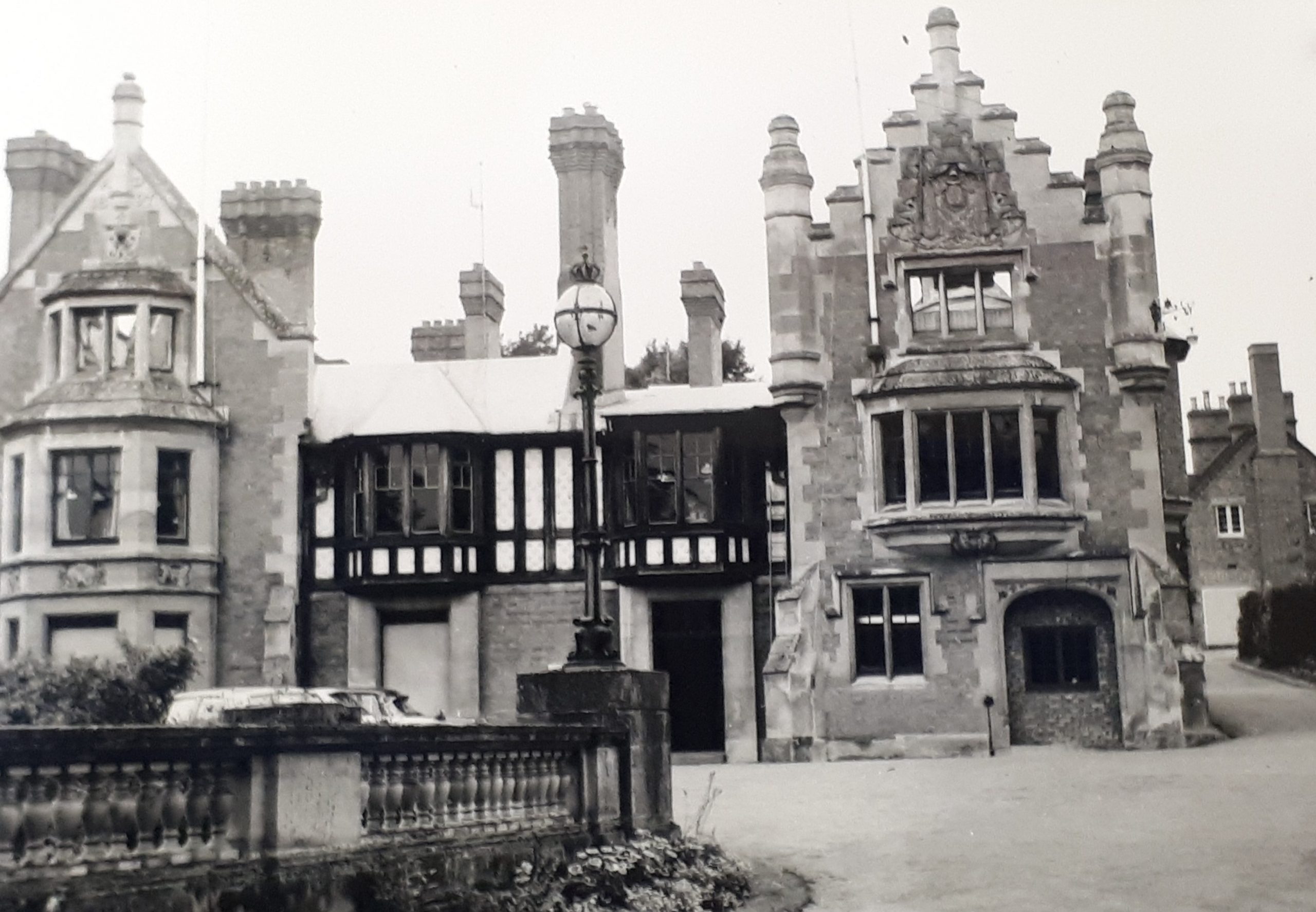 Wood Norton Hall in Evesham has a history to rival that of a timelord regeneration. The site, established in medieval times, once the seat of French royalty, later home to the BBC, is now a Grade II listed home and now a luxury hotel with rooms inspired by its history. It was the last home to the French pretender to the throne HRH Phillip Duc d’Orléans who is pictured along with his family at Wood Norton Hall at Ref: 899:156 WPS 39745 from our Worcester Photographic Survey (WPS) in 1897. That same year his uncle, the Duke of Aumale (the fifth son of King Louis-Philippe I of the French and Maria Amalia of Naples and Sicily and leader of the Orleanists) whose claim for the throne had passed from him to the Duc, died of a heart attack after writing 20 letters of condolence to families following a terrible fire at the Bazar de la Charité (recently dramatized as a Netflix series ‘The Bonfire of Destiny’). 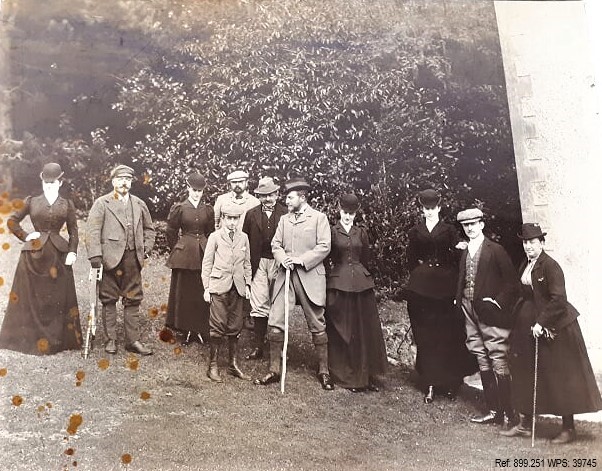 With a successful military career, the Duke of Aumale purchased Wood Norton Hall in 1872 following a move to England after the French Revolution of 1848. Having risen to the height of inspector-general by 1879, he was removed from office following an act of exception in 1883, depriving all members of families who had reigned of their military positions. Worse still in 1886, a second law decreed that any heads of former reigning families were to be removed from French territory entirely. Though he was able to return in 1889, following the bequest of his Chantilly estate to the Institute of France, including the Château de Chantilly where his art collection was to be turned into a museum. 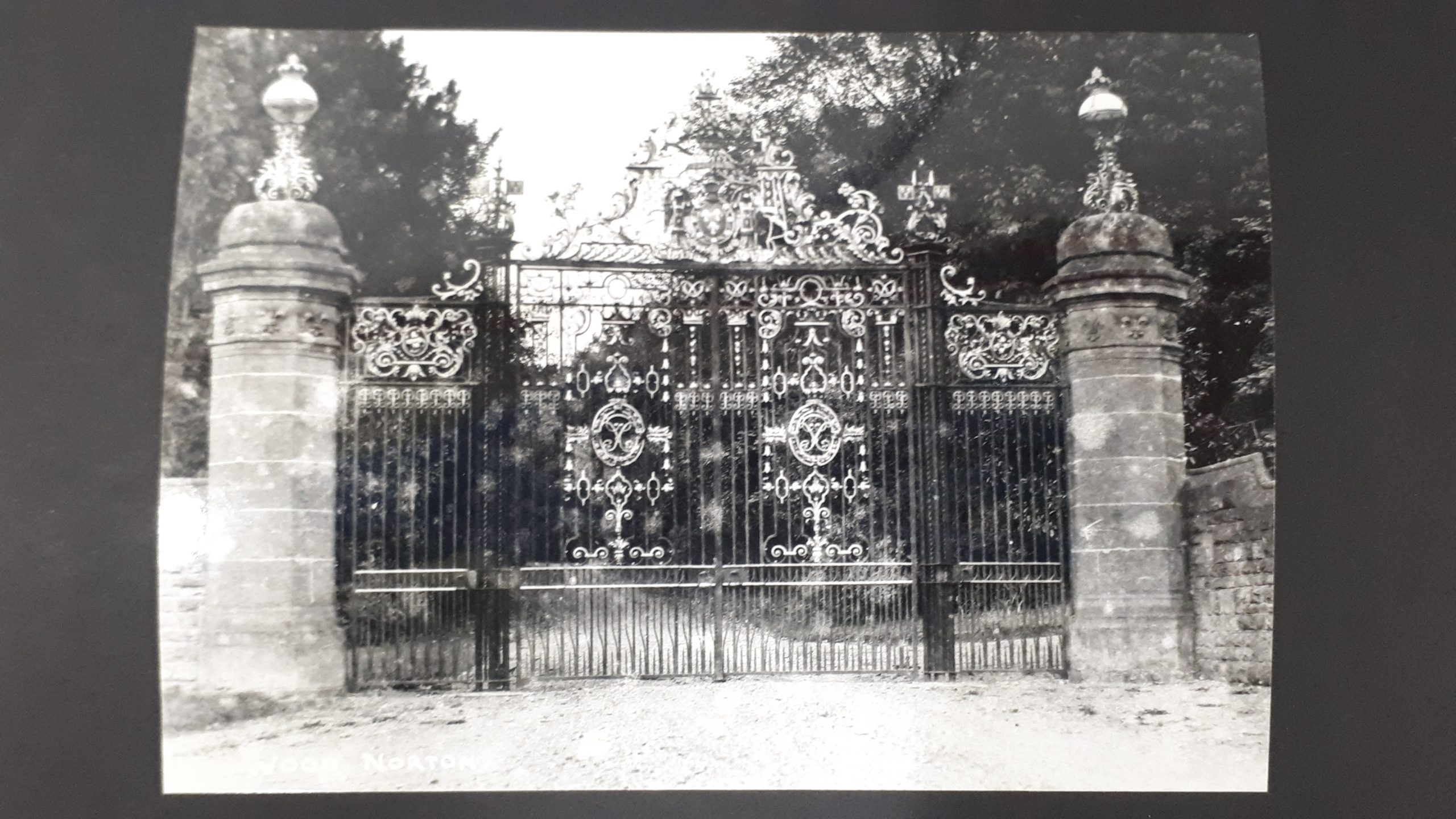 Wood Norton was described in the Bedford Daily Mail’s article from 1910 entitled “Home of the Exiled King” as ‘far from being palatial but it is a large house and its royal pretensions are emphasized by the fleur-de-lis that appear everywhere about it’. The historian Nikolaus Pevsner in The Buildings of England – Worcestershire also agreed describing it as ‘Victorian and nothing special, its upper floors gutted’ but the elaborate entrance gates ‘were moved to Woodnorton from Orleans House (now an art gallery), Twickenham by Duc d’Aumale. They are said to come from Versailles but have lost their finest ornamental parts’. (Pevsner, 1968). 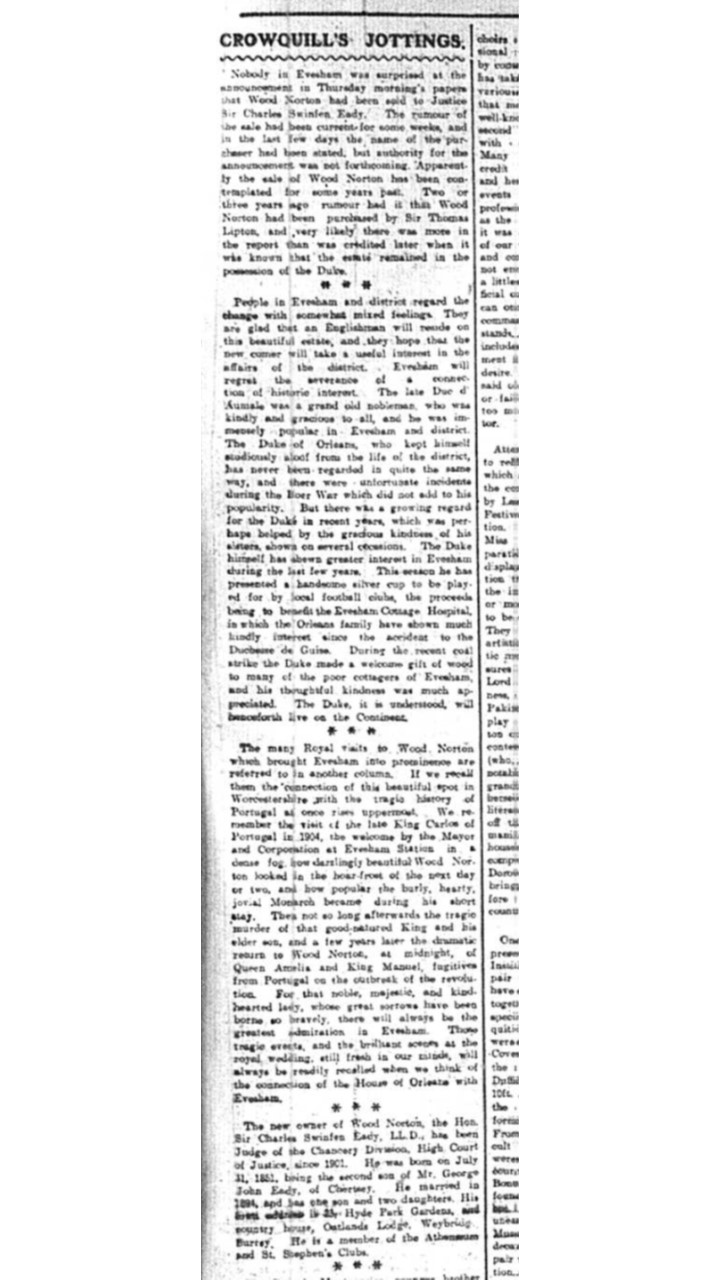 Cowquills Jottings, Berrows Worcester Journal, May, 1912 reporting the sale of Wood Norton on 4th May, 1912

The Orleans family left in 1912 and the sale of Wood Norton to Sir Charles Swinton is reported in the Berrows Worcester Journal. It appears that while the Duke of Aumale was well-regarded by the people of Evesham and described as a ‘grand old nobleman, gracious and kind to all’, the same could not be said for the Duc d’Orléans who had kept himself ‘studiously aloof’ at first. However, it appears his relationship with the people did warm over the years, with several appearances made. He later presented a handsome silver cup to be played by the local football teams, the proceeds going to benefit the Evesham Cottage Hospital.

Later events in the story of Wood Norton have all the hallmarks of a Doctor Who story, secret communications, the threat of nuclear war and a Satellite Earth Station (SES). Prior to the outbreak of WW2, there was real concern that the threat of invasion from Germany could compromise the BBC in London and subsequent broadcasting capability. Wood Norton was hidden within remote woodlands on a south-facing hill making it an ideal site in war. The BBC purchased the site in early 1939 and in August of that year it became the BBC’s Monitoring Service. Temporary huts were first built and a dozen studios. By 1940 Wood Norton was one of the largest broadcasting centres in Europe. It would become the BBC’s main broadcasting centre, should London be evacuated because of the threat from Germany. 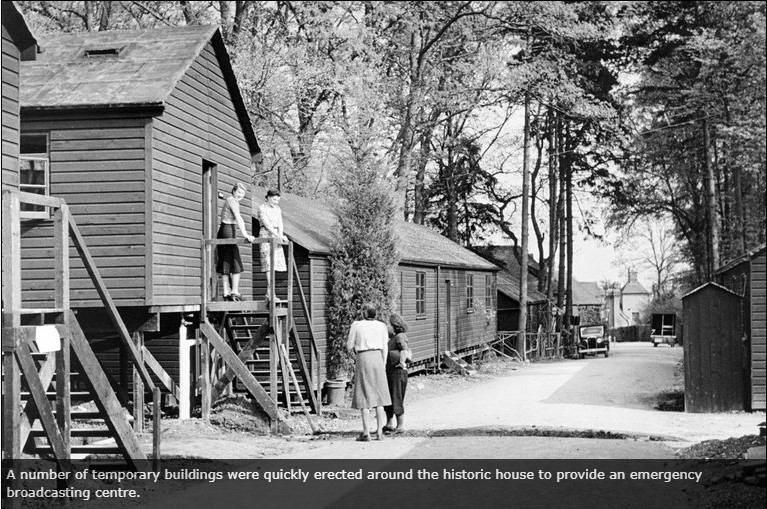 One source argues Wood Norton’s role (in sending and receiving decrypted messages) was underplayed (though for the full story you can read the book Assigned to Listen – The Evesham Experience 1939-43) and explained that eminent writers, journalists and linguists worked together in specially built huts to listen into communications from Europe including the great critic and poet Geoffrey Grigson and eminent art historian Ernst Gombrich. Refugees from Europe were recruited and stationed in Evesham becoming specialised broadcasters to the Resistance and special operations groups around Europe sending secret messages encrypted into what appeared to be normal entertainment broadcasts.

The nearby Abbey Manor (and subject of a future blog post) at Evesham is rumoured to be where one of the earliest D-Day broadcasts was made from. Evidence of ‘Abbey Manor studios’ as part of the so-called ‘Red’ network (established in the spring and summer of 1940) was confirmed by L.G. Smith who was an engineer who worked there and lived in the South Lodge, near the golden entrance gates. Smith also recounts the fire that took place in the upper storey of the house (later confirmed by Pevsner) the cause of which is still not known. 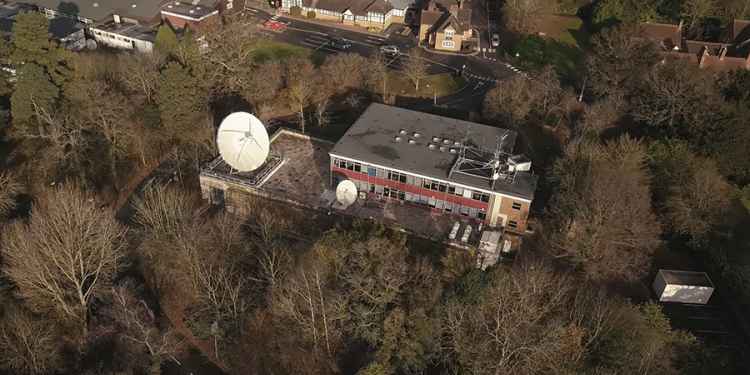 With the threat of nuclear attack during the Cold War, the BBC again made contingencies and built the ‘Protected Area Wood Norton’ (known as PAWN), a nuclear bunker completed in 1966 to house four radio studios and accommodation for 100 staff, known within the organisation as “deferred facilities”. Only certain members of the BBC knew about the existence of the bunker and the facilities at Wood Norton were not public knowledge, except that it was the home of the BBC Engineering Training Department (as shown from WPS 43853), established after the war. 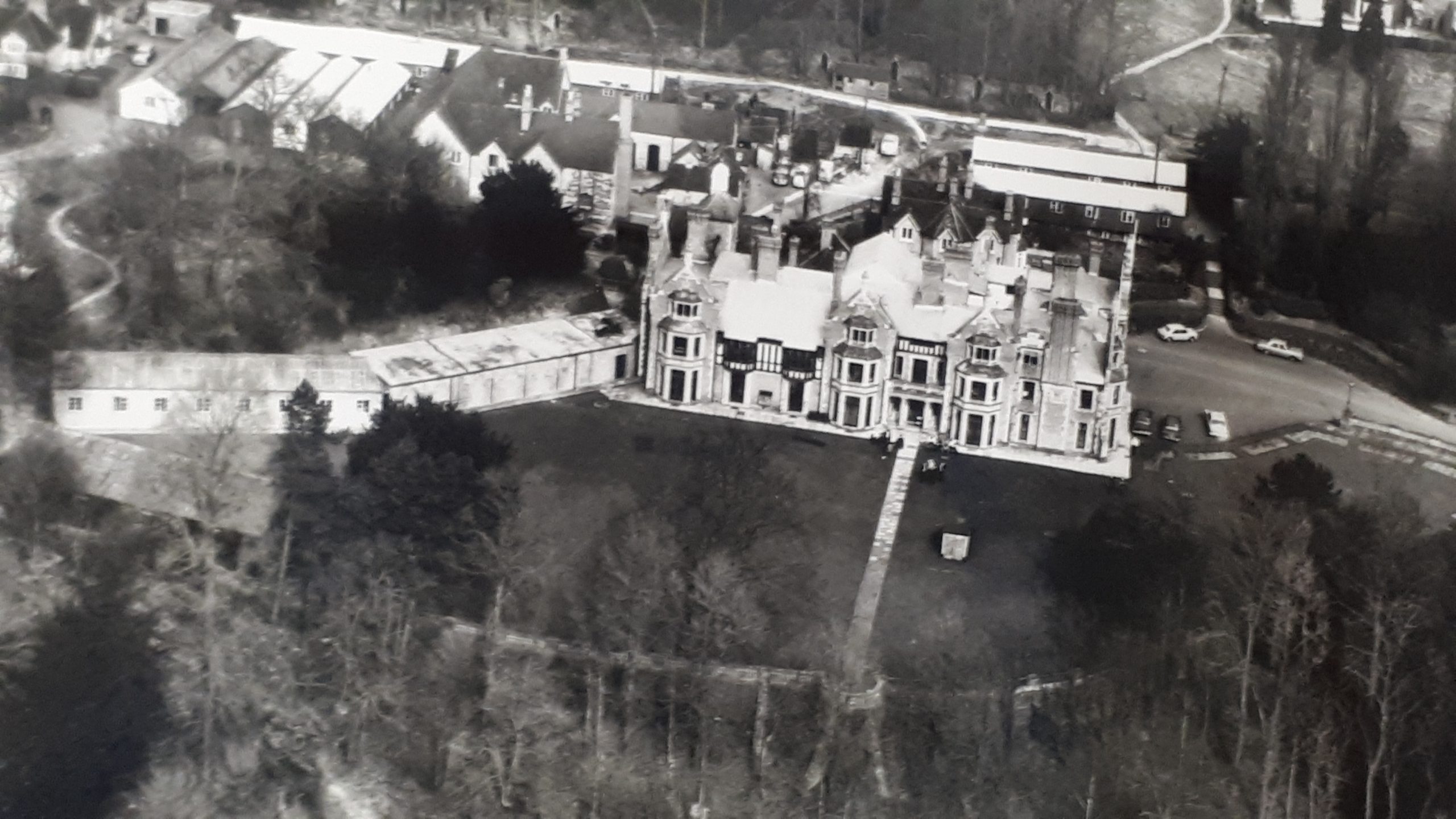 It is with some surprise given Wood Norton’s apparent secretive nature that Doctor Who (the longest running science fiction series in history which aired only 3 years earlier on 23rd November 1963) was filmed there. The site was used for the first episode ‘Spearhead from Space’ with the Third Doctor (the James Bond of Dr Who!) played by Jon Pertwee as he, the Brigadier, UNIT and his companion Liz Shaw (Caroline John) face down the terrible Autons. Wood Norton was however to play an even greater role in the franchise for the start of the career of one of the best-loved and arguably greatest Doctors of all time Tom Baker. 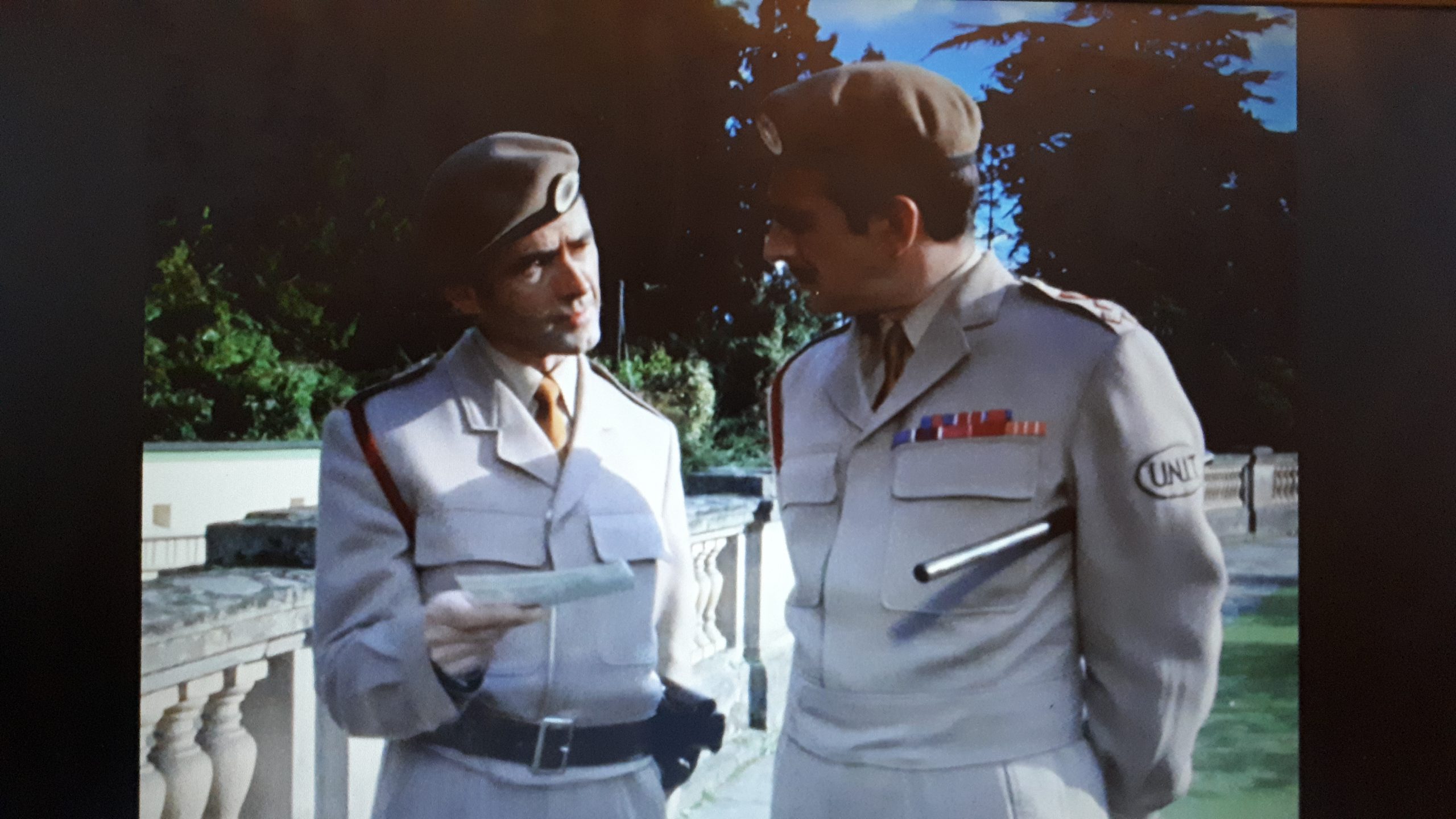 Airing on 28th September 1974, with some sense of irony, the episode ‘Robot’ featured a newly regenerated Fourth Doctor, as he, Sarah Jane Smith (Elisabeth Sladen) the brigadier and UNIT attempt to thwart a plan to steal nuclear launch codes to blackmail the Earth’s governments with them. The last time viewers had seen The Doctor, he had been flooded with deadly radiation in the episode Planet of the Spiders emerging weeks later from the TARDIS, severely weakened only to collapse in front of companion Sarah Jane and begin the process of Regeneration. 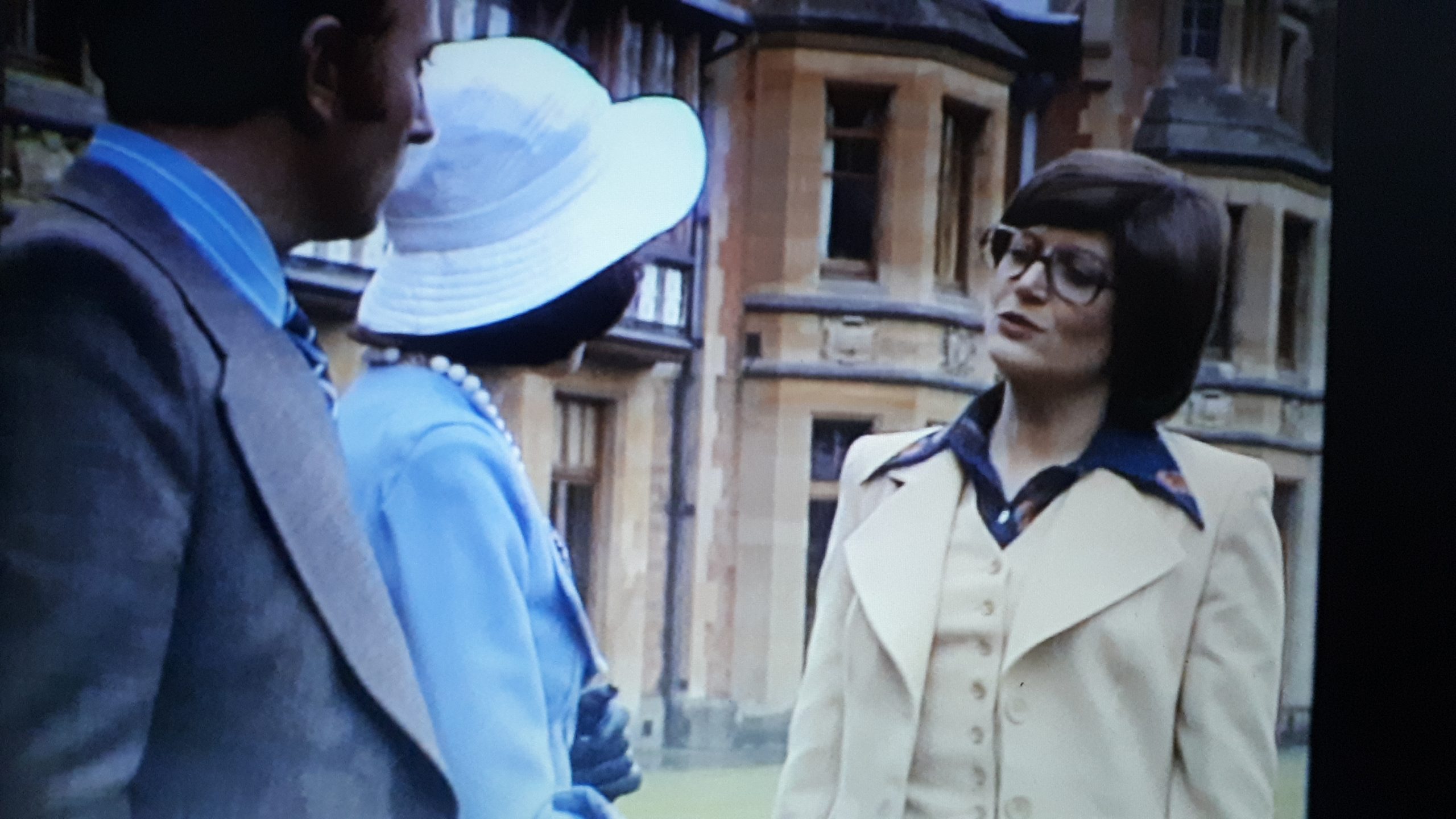 As the Doctor recovered under supervision from UNIT, a dastardly plan led by Hilda Winters (Patricia Maynard), the Director of the National Institute for Advanced Scientific Research, known as the “Think Tank” to use a reprogrammed Experimental Prototype Robot K1 (Michael Kilgarriff) (built by Professor J.P. Kettlewell, a former member of the “Think Tank”) to kill cabinet minister Joseph Chambers as “an enemy of humanity”, and to steal papers (the launch codes) from his personal safe. Despite K1 escaping and attacking UNIT and Sarah Jane Smith taken hostage, the newly regenerated Doctor manages to engineer a batch of metal-biodegradable virus in a bucket of solution onto K1 (as shown in this rare 8mm film clip) as he slowly shrinks down in size before vanishing. 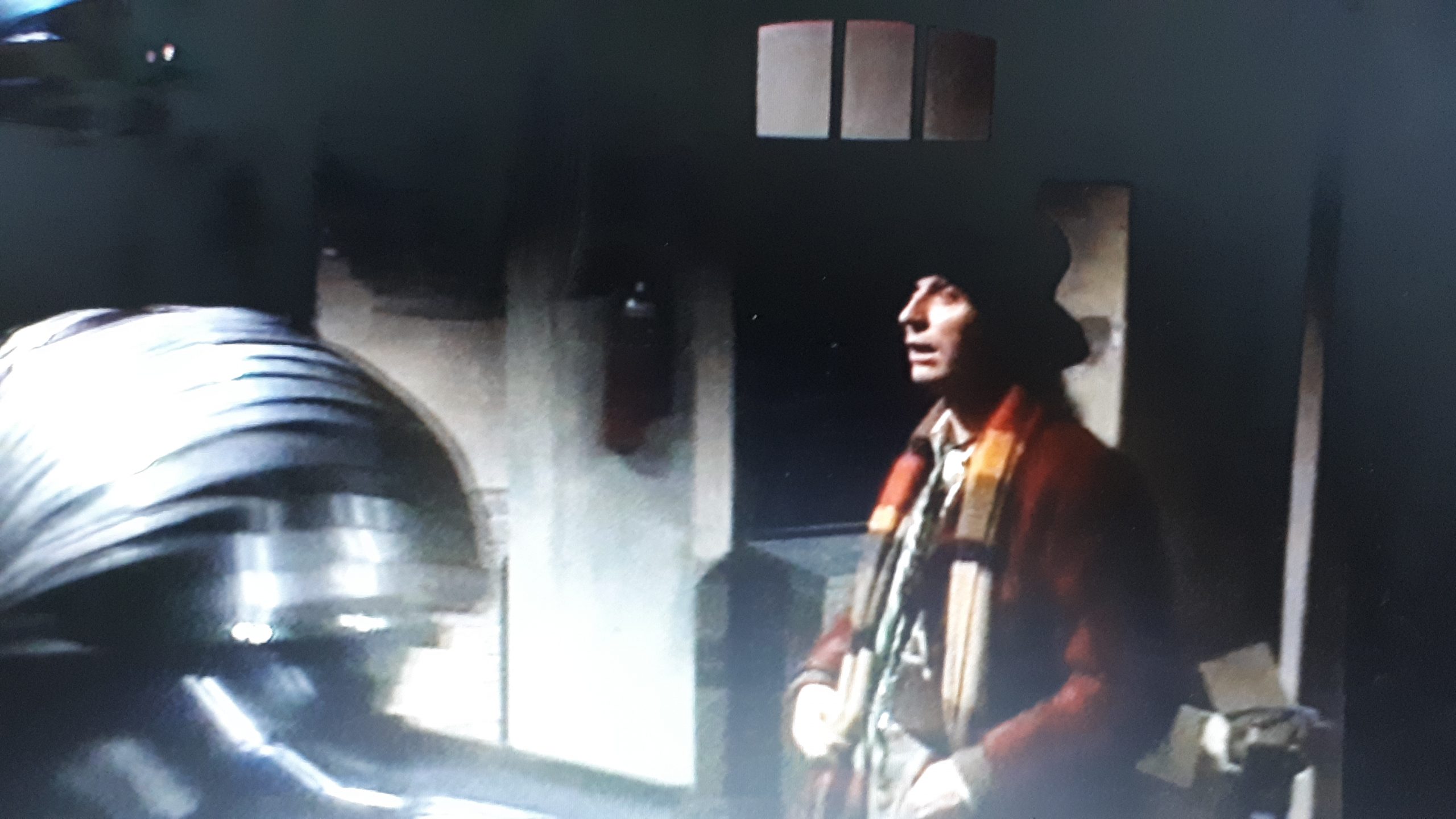 The Doctor attempts to outwit K1 in ‘Robot’ © BBC

Tom Baker went on to define Doctor Who as the quintessential Doctor achieving notoriety for his incredible emotional range, comedic nature, unpredictability and charisma. His brilliance is shown when he’s looking at his face for the first time as he tells the UNIT Doctor that ‘You may be a Doctor, but I am The Doctor. The definite article you might say!’ (comparisons can be made with the performance of The Eleventh Doctor (Matt Smith) with his first appearance. Comic timing is again shown when he chooses his outfit for the first time, leading to his now infamous multi-coloured scarf which came to define The Doctor’s appearance. 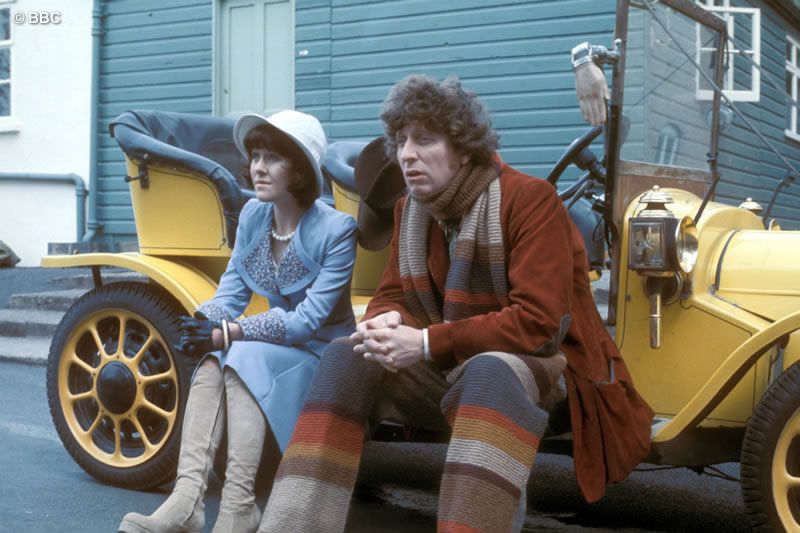 The Dr Who Magazine (issue 525, June 2018) reported in an article entitled ‘The Wood Norton effect’ that Wood Norton was where the first publicity shots for Tom Baker as The Doctor took place as ‘Robot’ was being filmed. This included Baker posing for photos in Bessie with Elisabeth Sladen and again in a UNIT Jeep with the Brigadier. They became the primary promotional images for the 1975 series and source material for the next two years on everything from The Dr Who Annual 1976 to jigsaw puzzles. Tom Baker arguably took Doctor Who to new heights of popularity that has hitherto not been repeated, not even by The Tenth Doctor’s (David Tennant) tenure. By the time The Fourth Doctor was handing over his keys to the TARDIS viewing figures peaked at over 16 million in October 1979.

Every effort has been made to acknowledge copyright, but please do not hesitate to get in touch if you are the copyright holder and have not been acknowledged. Images of Doctor Who screen captures, videos and photos are the copyright of the BBC and appear here as reference only to illustrate Wood Norton Hall and narrative of episodes ‘Robot’ and ‘Spearhead from Space’; no attempt is made to supersede this or any other copyright.