The 20th-century bore witness to the decline, although not necessarily the demise, of many ‘traditional’ industries in Worcestershire including the gloving industry in Worcester, the nail industry in Bromsgrove, the needle and fishhook industry in Redditch and the carpet industry in Kidderminster. These were major employers as between them they accounted for tens of thousands of jobs across the county and with their decline the need to find alternative avenues of industry and employment. Technological advancement and global commerce, major architects of change during the 20th-century, led to the development of new industries, including service industries manufacturing a wide range of consumer goods.

With its central location, supported by good transport links and a ready workforce, Worcestershire – as part of the West Midlands – was at the heart of the 20th-century’s British automobile industry. Companies investing in the county, in the early 20th-century, included the Morgan Motor Company, which still manufactures Morgan Cars in Malvern today, The Austin Motor Company, which established the Longbridge plant, now out of county on the southern outskirts of Birmingham and the Enfield Cycle Company in Redditch, which made motorcycles, bicycles, lawnmowers and stationary engines under the name Royal Enfield. Like many other manufacturing industries car manufacture in the West Midlands fell into relative decline from the 1970s, as changing economic and labour market conditions led to a period of ‘deindustrialisation’ and a transition towards a more ‘high tech’ and service-based economy. 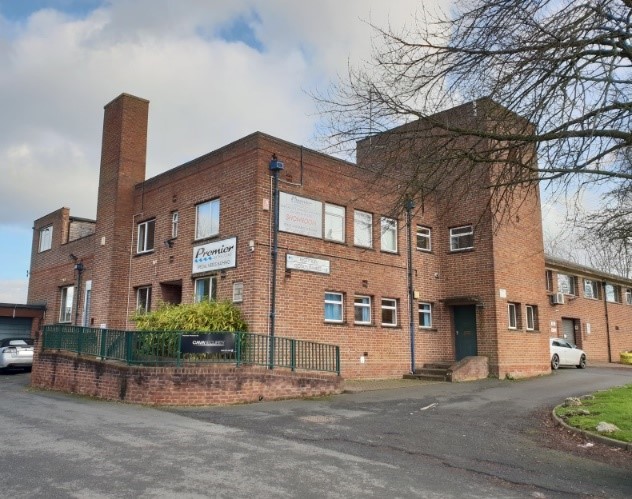 The Enfield Cycle Company, in Redditch, manufactured motorcycles, bicycles, lawnmowers and stationary engines under the name Royal Enfield. This brick block, its massing reflecting 1920s -1930s Dutch and Scandinavian influences, is one of several buildings which survive as part of the Enfield industrial estate; many others have more recently been demolished or heavily modified.

Other significant employers in 20th-century Worcestershire – some in fact continue to be – included Mining Engineering Co Lt. (Meco), who moved to Worcester in 1925 and became Dowty Meco in 1979; Kays, a major player in the ‘home catalogue’ business from 1890 until 2007; L. G. Harris & Co Ltd., who has manufactured paint brushes and decorating products at its Stoke Prior factory since 1936; Worcester Engineering Co Ltd., founded in 1962 by Cecil Duckworth and now Worcester Bosch, Brintons, which began manufacturing carpets in Kidderminster as early as 1783, and Halfords, who opened their head office in Redditch in 1971. Worcestershire also benefited from the nationalisation of the British Sugar Beet Industry when in 1925, one of its refineries was built in Kidderminster. British Sugar closed its Kidderminster base in 2004; the factory site was soon after cleared for new development. 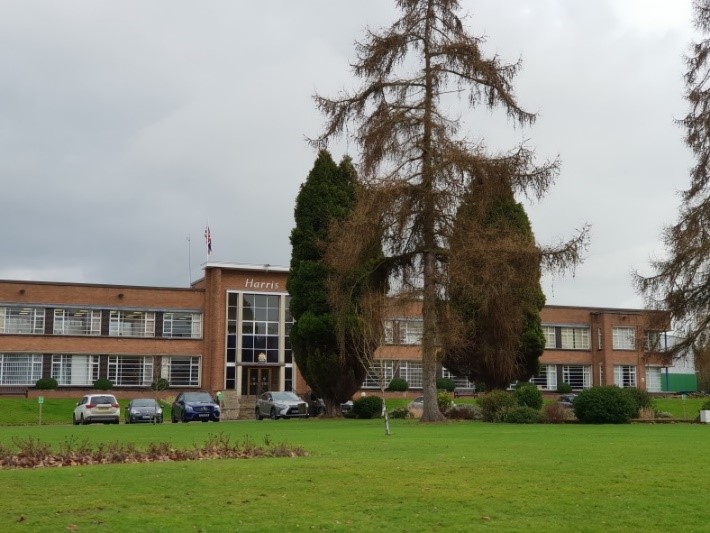 Some of the most advanced factories of the post-1945 period are the ‘low-rise’ factory blocks that combine the skills of the architect, engineer and landscape architect in the layout and design of manufacturing, research, education, administration and support services within designed landscapes. Set within beautifully landscaped grounds, the factory buildings and offices associated with Harris Brushworks, in Stoke Prior, is one such example. Commissioned by Leslie G. Harris in 1939, and designed by Bromsgrove architect G. C. Gadd, construction was put on hold at the outbreak of WWII. The factory buildings weren’t completed until 1947, and the office buildings weren’t completed until 1959; the company, however, stayed faithful to Gadd’s original International Modern design (Butler, 2017, 111). 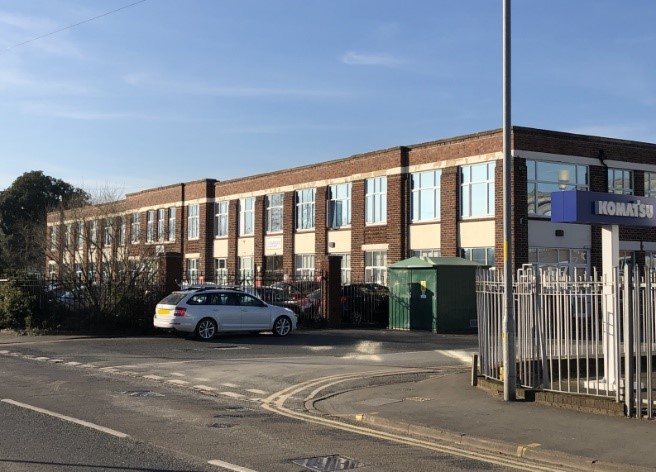 Mining Engineering Co Ltd. (Meco) moved from Sheffield to Worcester in 1925. Their factory, on Bromyard Road (now Joy Mining) is located on the east side of the Worcester and Hereford Railway. It is a simple functional expression of its internal steel frame, a feature common to many factories of the period. It was one of the few places in Worcester to suffer bombing in WWII, when on 3rd October 1940, a lone German aircraft killed seven and injured more than 50 people. 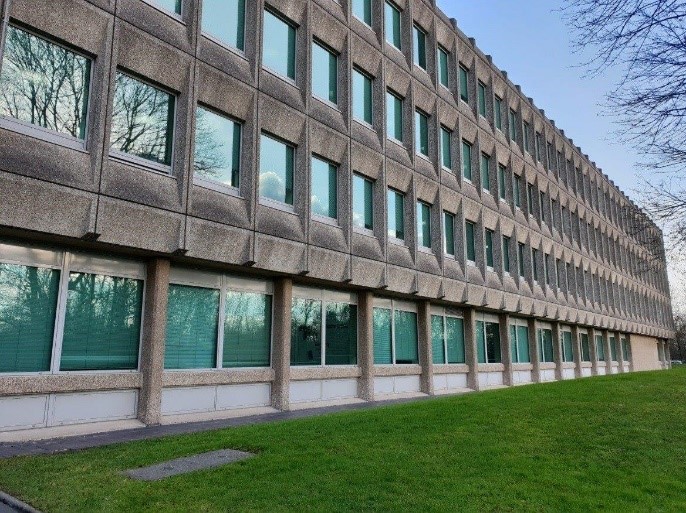 Halfords head office at Washford industrial estate in Redditch. This striking four-storey concrete building with heavily glazed frontage faces on to a deep green verge beside Icknield Drive. As well as being involved in the sale of automotive parts Halfords also became known for their sales of cycles which continued the history of the cycle industry in the town.

As well as leaving a legacy of manufacturing and commercial buildings many industrialists built housing estates for their workforce, with additional buildings for rest, recreation and worship. The Cadbury family who believed in social responsibility and improved working and social conditions, built cottages for workers at both their Fruit Canning Factory in Blackminster, and their factory in Blackpole, Worcester, while Austin Village, between Longbridge and Northfield, and parts of Tolladine, in Worcester, were developed to house munitions workers, working at the Austin Motor Works and Cadbury factory in Blackpole, during WWI and WWII respectively. 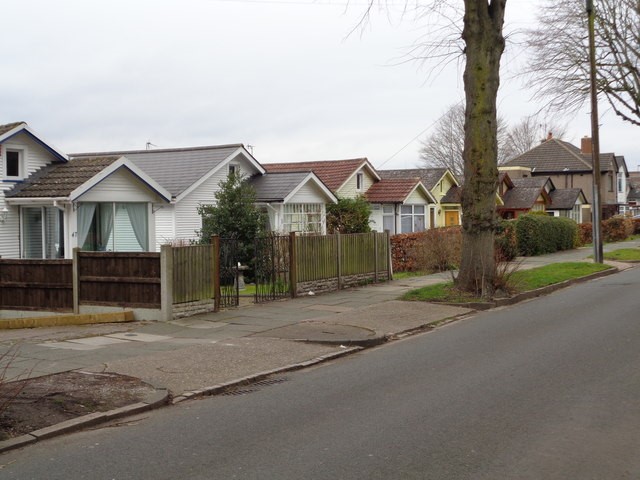 The 20th-century saw a significant shift in industrial development – facilitated by the expanding road network and spread of mains electricity – with many manufacturers moving to cheaper land, with room to expand, on the urban/rural fringe. This is well evidenced in the New Town of Redditch, where new, well connected, industrial estates of varying size, were developed to provide buildings or land for businesses investing in the town. This urban sprawl has persisted with new quickly assembled, modular industrial estates, business parks and out of town retail parks putting increased pressure on green belts and, along with the rise of e-commerce, impacting on the viability of high streets up and down the country. Although some buildings, associated with our 20th-century industrial heritage, have been well recorded and sensitively re-developed as part of urban regeneration schemes, many others remain vulnerable to decay and/or demolition without record.

Although not a coastal county, water has had a significant role in the development of Worcestershire, including its landscape, settlement, economy and identity. The River Severn – the longest river, as well as the longest navigable river, in England – and its tributaries, is a significant source of water (for irrigation and sanitation) and energy as well as a means of transporting people, animals and products. At approximately 220 miles in length the Severn rises in the Cambrian Mountains of Powys, before flowing through Shropshire, Worcestershire and Gloucestershire, and then emptying into the Bristol Channel. Worcestershire’s navigable network further grew, when in 1770, the Severn was linked to the developing canal system. A River Severn bank-side survey, undertaken in 2008, from Worcester to Tewskesbury, established that the historic environment of that stretch of the river was mostly the creation of the 19th and 20th centuries, although there remained considerable potential for earlier remains in the river banks (Hurst and Miller, 2008, 1). Heritage assets identified included a stone revetment on the river bank, bridges, river locks, weirs, boathouses, WWII defensive sites and an oil storage facility.