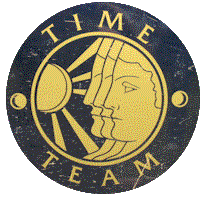 Time Team was a TV phenomenon, making a popular archaeology TV programme watched by 3 million viewers at its peak. Viewers picked up terms like “Geofizz” and learnt about some of the archaeological techniques. Archaeologists found themselves being quizzed by people, when out on jobs, who watched the TV programme and had had their interest piqued and felt they understood a little bit about archaeology. We know quite a few of you who come to our events, or are reading this blog, will cite Time Team as a reason for their interest.

We were involved in two digs. They were always on the lookout for potential sites, and a couple of ideas we suggested were chosen. The team worked with local archaeologists on the planning and preparation, as they know the area best, including booking the local village hall. Then during the dig some of our archaeologists joined them as extra diggers, providing local expertise on finds and features, and help with the reporting.

Time Team was still fairly new when they first visited the county, being season 6 (filmed 1998). They sent out requests around the country for potential sites, and we responded with the suggestion of Kemerton. We’d done quite a bit of work on differing sites here over the years, and had just been to a interesting site and were aware of prehistoric cropmarks to the north, so thought it might make a good dig, and would help develop the story of the wider landscape. The TV people thought the question as to whether they were Bronze, or Iron Age would interesting and would be the key question for the episode.

The regular Time Team archaeologists came but supplemented with some of our staff. The nature of a TV programme means that they are very careful about what goes on the screen, and how many people are featured. The regular team and invited guests will be the main people on screen. So there were a few times when our archaeologists found something and explained what it was, and then stepped to one side for one of the regulars to film it!

Malcolm Atkin, County Archaeologist, was one member of our staff who appeared several times, at the beginning and then at different times throughout.  He recalls that he was there to play the role of grumpy archaeologist, telling them what they could and couldn’t do! 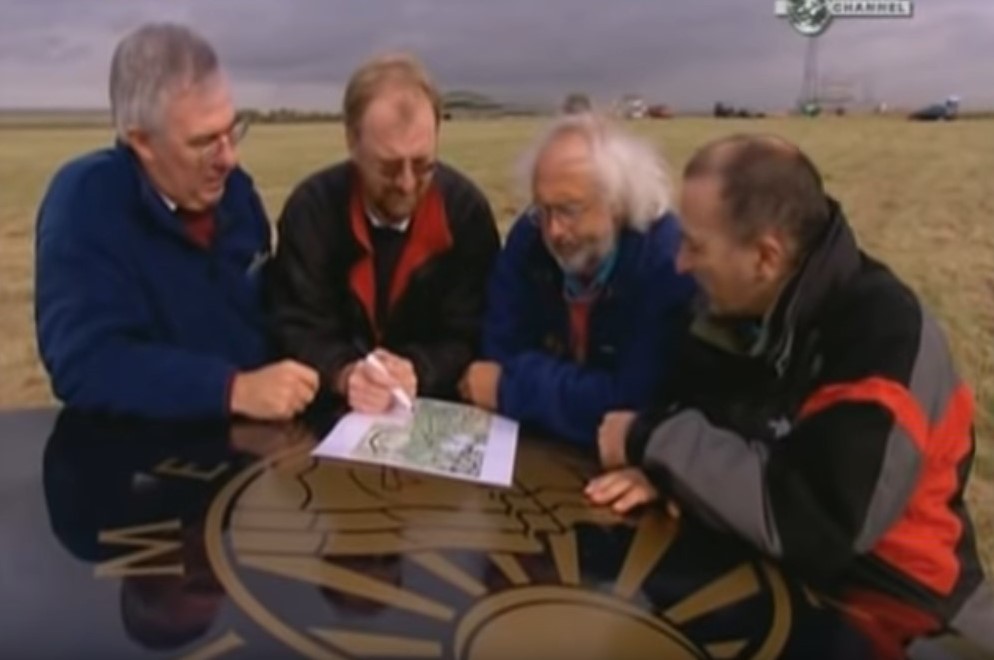 The cameos and experimental archaeology were a popular a feature of Time Team. Here they had an experimental archaeologist making an ard, a forerunner to a plough. Deborah Overton, our Outreach Archaeologist, arranged for school children from the local school to join us to help with field walking, picking up what they could find in the field. She also asked South Worcestershire Archaeology Group to help with this. 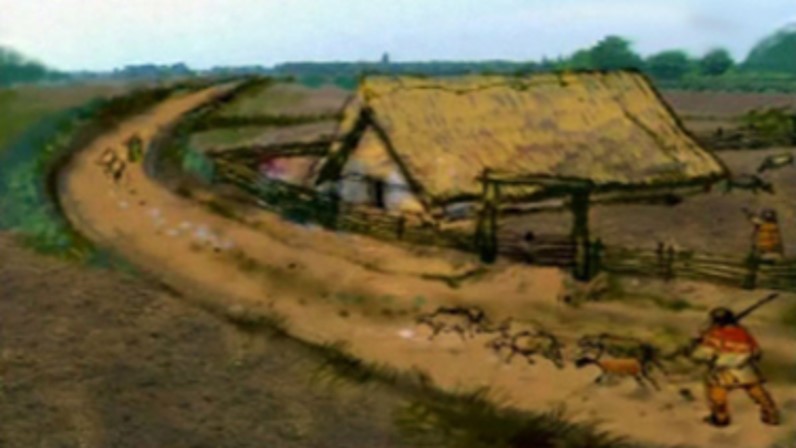 Reconstruction illustration of the Grubenhaus

By the end of day 3 the concluding story was filmed, with Tony Robinson summing up. Most of the site they were looking at was Iron Age, including an important Iron Age roundhouse, with very little Bronze Age evidence. There had been a Saxon grubenhaus (sunken building possibly also known as a “grub hut”) at one edge, but with limited time this was recorded by our archaeologists and then the trench closed and they moved back to the prehistoric areas to concentrate on that part of the story so they could answer the dating question. Another significant discovery was made when Robin Jackson was walking between trenches with Phil Harding and he picked up a small Palaeolithic handaxe from the field surface, one of the earliest finds they’d found on Time Team.

The question that is usually asked of Time Team is, “Do they really do it in three days?” The digging and filming certainly took three days, but the day after our staff were finishing off the recording of the trenches and backfilling, with the help of a couple of Time Team archaeologists. The TV cameras had gone by now and it was a simple case of recording and backfilling, so the site was returned to how it had been. Finds processing and analysis, which we like to stress is just as important as the digging, but can take longer, was carried out by our staff and then fed into the report.

Kemerton was written up by an archaeologist employed by Time Team to produce all the reports in a series. It is now available on ADS. It was also written up in a more public friendly way for the series booklet which used to be produced. 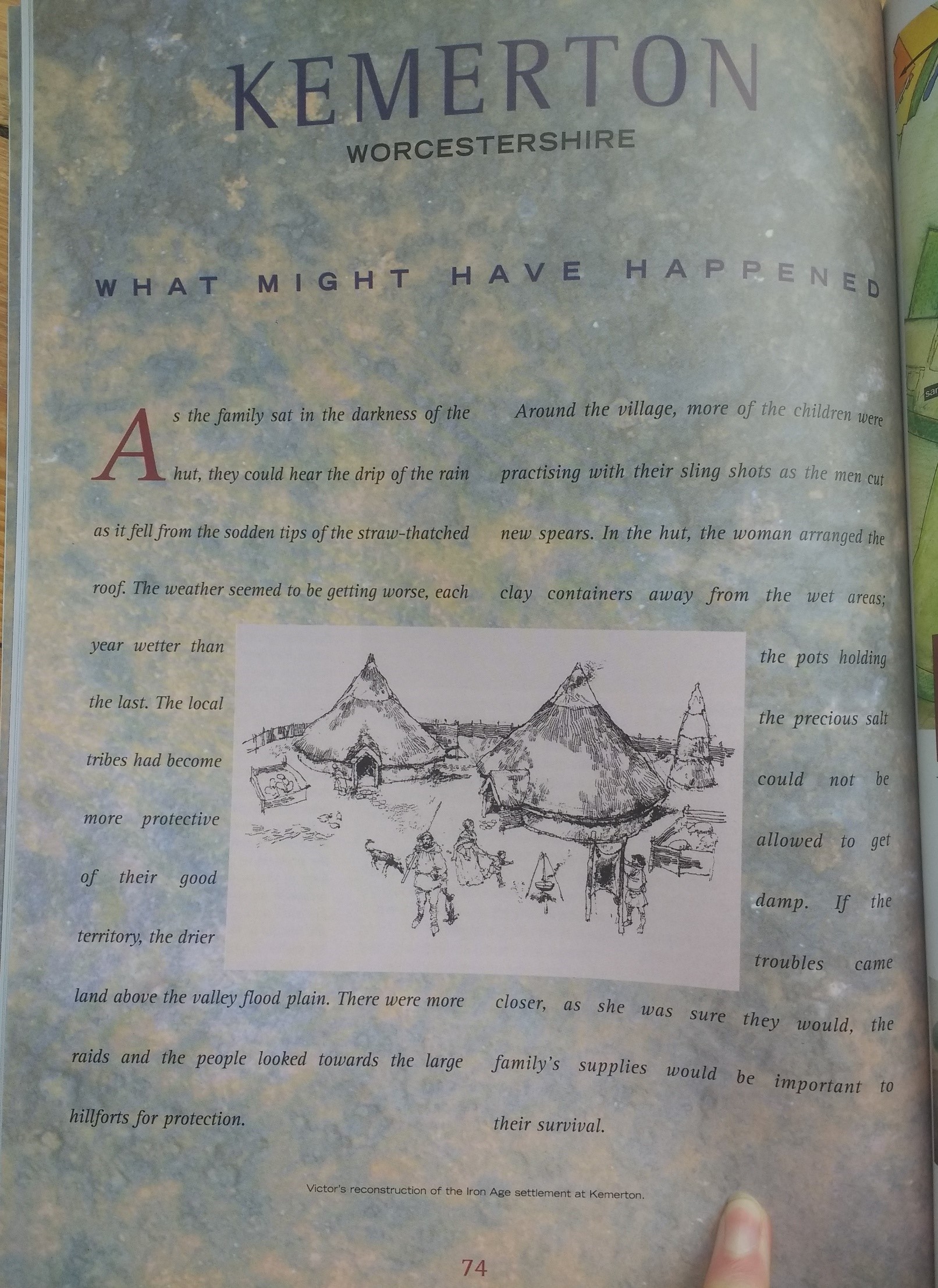 Have a look at the episode on All4, Channel 4’s streaming service (registration required).

Three years later we contacted Time Team about a return visit. The Foot and Mouth outbreak required a large site to bury carcasses, and the former RAF Pershore was selected. As part of a known prehistoric and Roman landscape archaeological investigation was required prior to any work. We’d already started working there and suggested a section of it to Time Team as a potential site. We’d already found lots of late Iron Age and Roman activity during the watching brief we maintained as they dug the burial pits – Time Team came in and their Geofizz revealed this extensive complex of lines and circles. Were they Bronze Age burials, iron Age settlement, a Roman farm or all three? There were lots of lines and circles on the geophysics results which justified investigating –Malcolm Atkin recalls the bonus of QinetiQ, who we were working for on the site, offering him a new computer if he could them on TV. We knew that there was plenty to discover, and importantly had the facilities required by TV production unit, so they came to film. 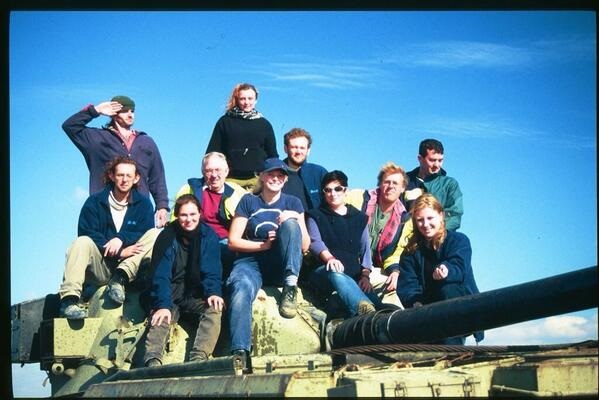 Once again, our archaeologists were involved, supplementing the regular crew. As before for TV reasons they preferred the recognisable faces to be at the forefront, so although our team were familiar with the site, having been there for a while so knew the geology and how deep to dig, they stepped aside for Phil and co to be filmed directing the JCB!

Lots of archaeology was revealed and was largely of Iron Age date, the circles and lines being revealed to be the remains of roundhouses set within large ditched enclosures, so probably an Iron Age farming community.

The former airport control tower was used as the incident room. Finds were brought back from trenches in a pink Corsa, to our finds archaeologists working in the tower.

The report for the Throckmorton dig was written up by our staff this time. By this series they weren’t producing their series booklet.

Have a look at the programme on YouTube (not currently on All4). 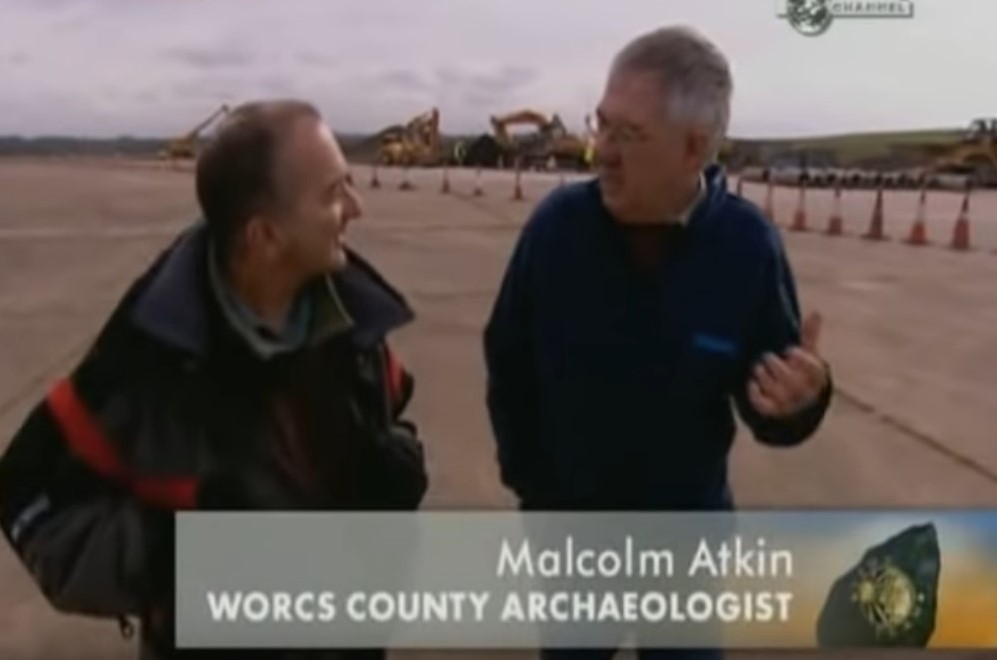 Speaking to our staff who were involved, most said it a very interesting experience seeing how they did it. Top of their list though was the food. Several people immediately recalled the amazing catering provided by the company who came to feed the team on all digs. They were called Bad Catering, which was rather misleading. Apparently some of them still haven’t tasted crumble and custard as good!

Staff enjoyed seeing the process and being involved as a one-off, and there was good camaraderie between the Worcestershire and Time Team archaeologists. It was strange though doing it for the cameras and having to reshoot. On one occasion Francis Pryor kept fluffing his lines so the people digging behind had to keep where they were until it was finished for continuity.  They said it was a good experience, but also slow and frustrating, so most were happy to go back to ‘normal archaeology’ the following week. 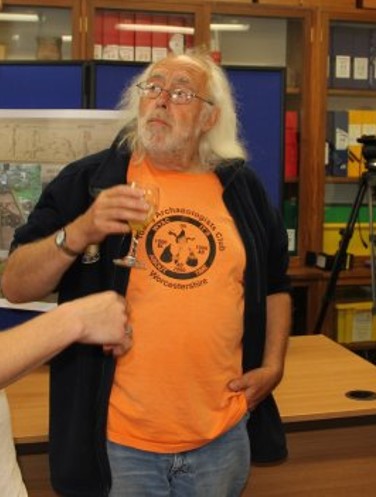 Mick Aston, wearing a Worcestershire Young Archaeologists Club T-shirt. Time Team inspired the creation of the club in 2003 and Mick came several times, wearing the t-shirt he was presented with several times on TV. 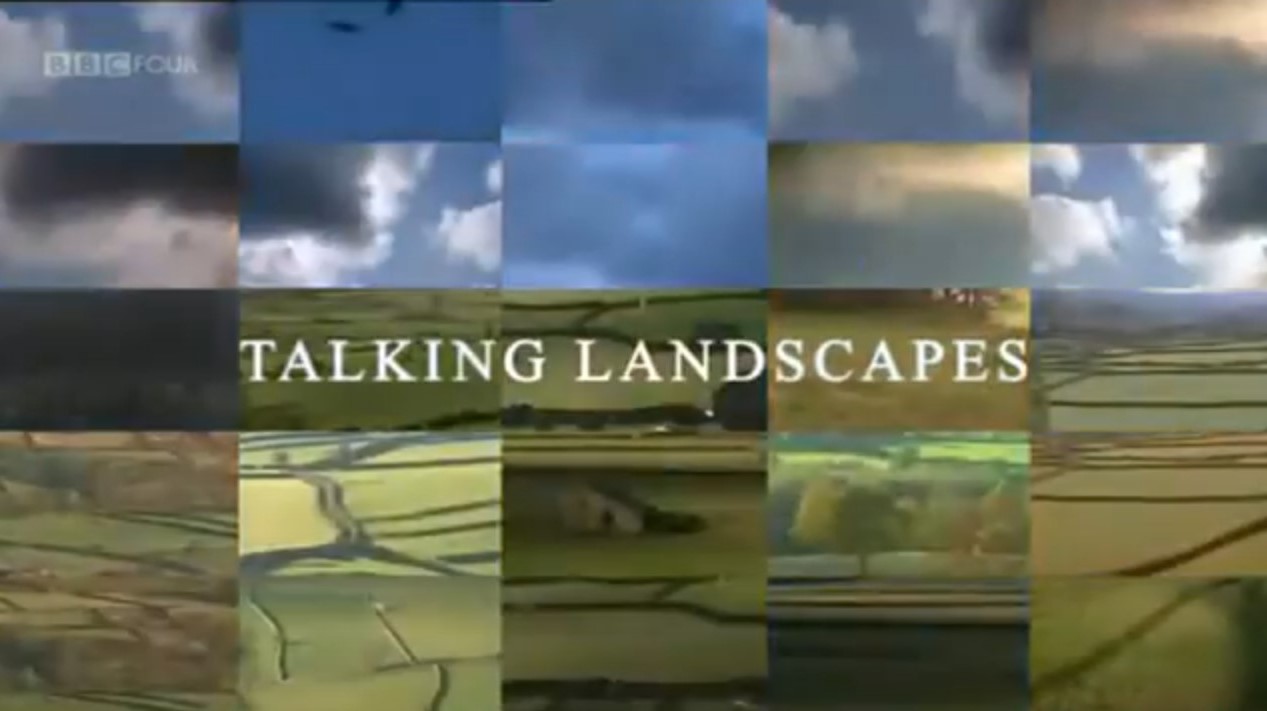 Time Team wasn’t the only TV programme we’ve been on. Another one we helped was filmed near the Kemerton site, broadcast in 2000. Talking Landscapes was a series which looked at different British landscapes, tracing back the changes over the centuries, with archaeologists and historians contributing. It was presented by scientist and broadcaster Aubrey Manning, and we were invited to take part as we knew the area so well through several excavations and Desk Based Assessments. It was a fascinating series, and Robin said it was really rewarding to be involved, and Aubrey was very knowledgeable and great to work with. 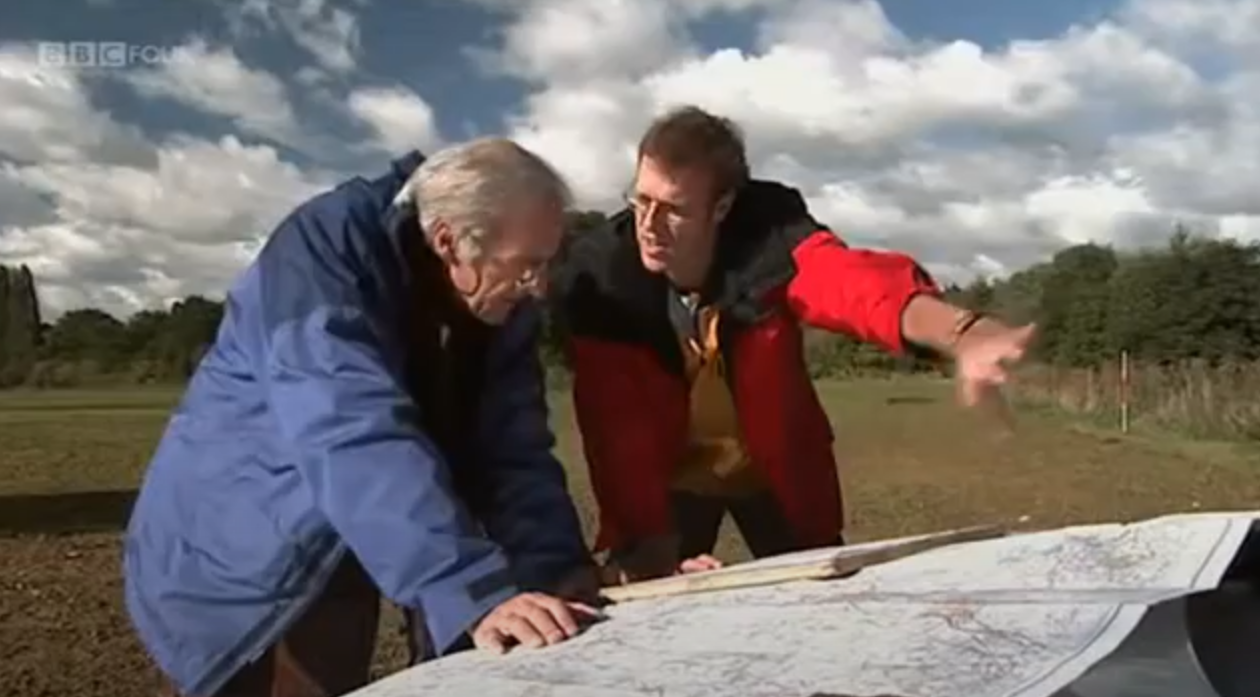 Robin Jackson explaining to Aubrey Manning about the local landscape

One response to “Time Team in Worcestershire”

The Worcestershire Historic Environment Record (HER) Public Desk will be reopening from Thursday 3rd December. To allow for social distancing measures, the desk will be operating on an appointment only basis between 10:30 and 13:30 on Tuesdays and Thursdays. The Worcestershire HER is the County’s primary record for archaeological and historic environment information, holding over...