In this series we look at some of the Worcestershire people who sailed on RMS Titanic, and the stories we can tell through the records.

Known as Frank, Mr Francis Millet was an internationally famous painter born in the United States. He was part of a group of artists based at Broadway in Worcestershire where his had most recently lived with his family. Frank, at 65, had been travelling on the Titanic with his friend Major Archibald Butt, aged 47. Archibald Butt was a military aide to American President Theodore Roosevelt then to President William Howard Taft, and had previously been a journalist. Sadly both men drowned when the Titanic sank. Frank’s body was later recovered on the Mackay Bennett steamer and he was buried in Massachusetts, but his friend’s body was never recovered.

The son of a surgeon, Millet was born in Plymouth, Massachusetts, USA, in 1846. He accompanied his father in the Civil War then was a drummer Boy with the Union forces and later served as a surgical assistant. Francis Davis Millet obtained his master’s degree in language and literature at Harvard University, in 1869, and then received art training at the Royal Academy of Fine Arts in Antwerp, Belgium.  He was a correspondent on the Russian-Turkish War between 1877 and 1878. He wrote as an American war correspondent for several American and English newspapers including the London Daily News and Graphic, and the New York Herald and in 1898 he went to Manila as war correspondent for The Times and for Harper’s Weekly. He later became city editor, of the “Boston Courier.” He was decorated by Russia and Romania for bravery under fire and services to the wounded. He later published accounts of his travels.

After the war Frank married his American wife Elizabeth “Lily” Merrill in Montmartre, Paris, witnessed by author Mark Twain and sculptor Augustus Saint-Gaudens. He devoted himself to painting and to administrating several societies for fellow artists. He received an unprecedented silver medal in his first year in the Royal Academy of Fine Arts at Antwerp in Belgium, and a gold medal in the second year. His work as a decorative artist includes the murals of the Baltimore Customs House, Trinity Church of Boston, and the Capitol Buildings of Wisconsin and Minnesota. His paintings Include A Cosy Corner, in the Metropolitan Museum of Art, New York; At the Inn, in the Union League Club, New York; and Between two Fires, in the Tate Gallery, London.

Frank was Director of Decorations at the Columbian Exposition, Chicago in 1893. In 1880 he became a member of the Society of American Artists, and in 1885 was elected to full membership in the National Academy of Design, New York, and became its vice-president. He also became a member of the American Water Color Society and of the Institute of Painters in Oil Colors, London. 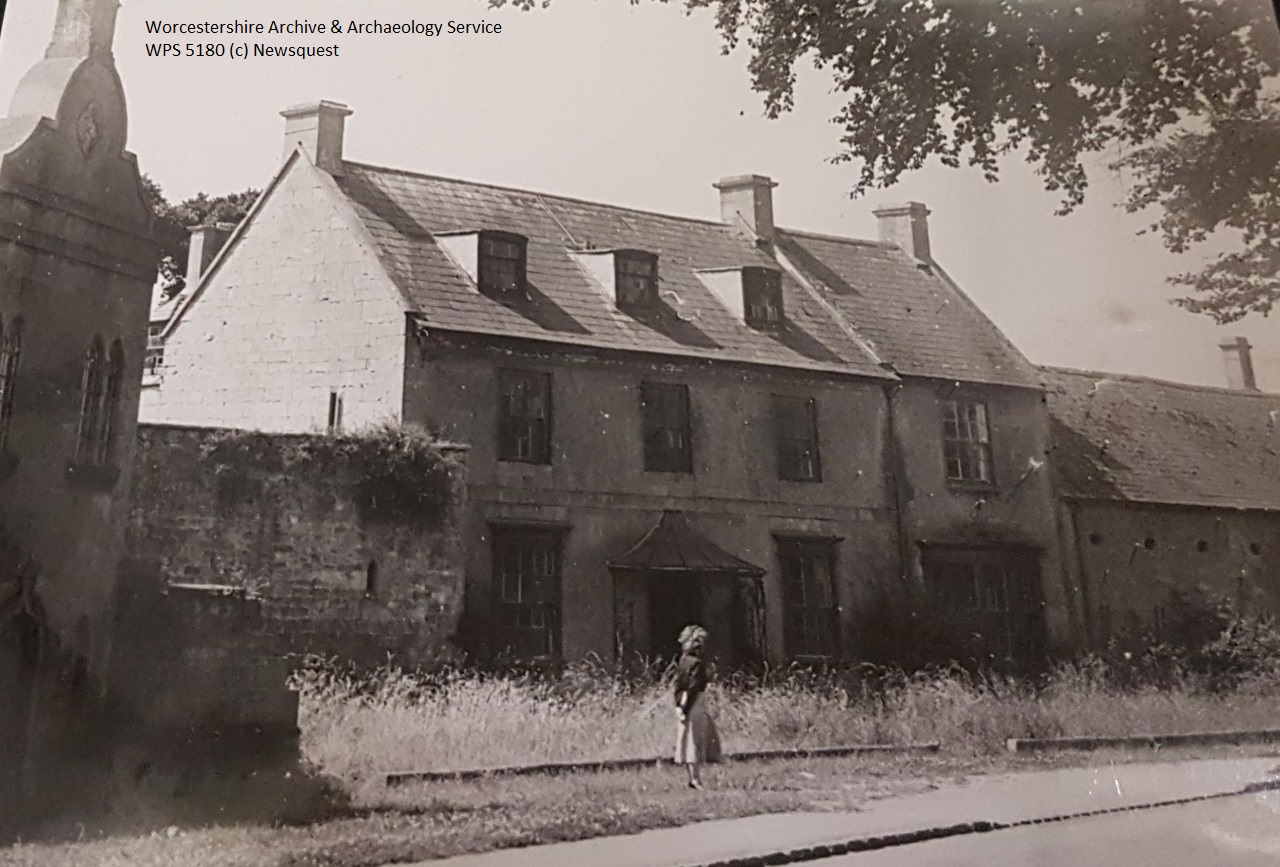 Francis Davis Millet and his family moved to Broadway in Worcestershire in the 1880s where became the host of a small ‘colony’ of artists. The colony lasted just five years but involved many different artists from different disciplines, from both England and America. It worked like a summer camp, providing an escape from daily life. It was becoming fashionable at this time for groups of artists to gather in remote beautiful parts of the country to work including Newlyn in Cornwall, Whitby in Yorkshire and Walberswick in Suffolk.

Millet himself was by now described as an American illustrator and painter. He first moved into Farnham House in Broadway with his family, which overlooked the village green in Broadway. They also acquired the ruined Abbot’s Grange which they restored as a studio. Henry James the American writer who visited the colony described Broadway in 1889 as a ‘very old English village, lying amongst its meadows and hedges, in the very heart of the country, in the hollow of the green hills of Worcestershire’.

Others who came to stay at the colony included:

Although Frank and his wife Lily Millet had moved to a home in Broadway, Worcestershire where his son John was born, he was often in the United States completing commissions. In 1910, he moved into the G Street home of Major Butt in Washington DC and was working in America. Early in 1912 they took a trip together. 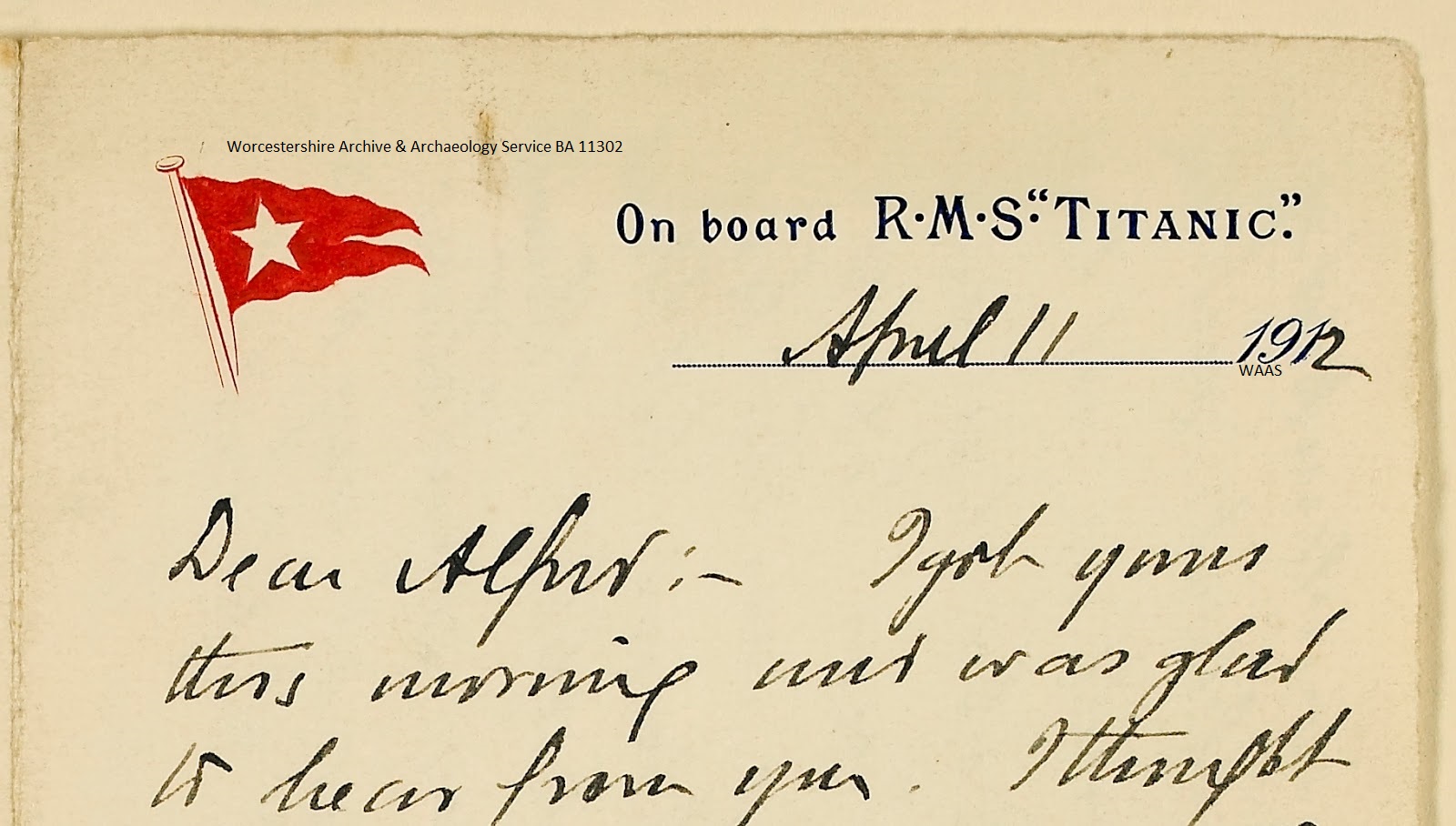 Frank’s letter from RMS Titanic, which is kept in the Worcestershire Archives

Millet and Butt’s departure was a news item due to Major Butt’s important position working for the president. According to the Washington Post on 18/4/1912 Millet had apparently:

“..noticed that Major Butt was looking paler than usual and generally run down. [when] Major Butt would not [ask for leave] Millet then went to the President and made the request that he urge Major Butt to go along. There was a good deal of chaffing about it in Washington, but they finally put off together”

Butt and Millet travelled in Europe on a six-week tour to help improve Butt’s health. They had visited Naples, Gibraltar and Rome, where they had an audience with Pope Pius X who gave Butt a letter to deliver to President Taft. During this trip Millet also had meetings about the American Academy in Rome. The friends were ending their trip by travelling back to America on the Titanic.

When the ship had stopped off in Queenstown in Ireland, on 11th April, Frank posted a letter to his friend Alfred Parsons (1847-1920), who had joined him in Broadway at the artist’s colony he started there. Parsons was a painter and illustrator of Dickens’ work and renowned 19th-century garden designer, judging at the Chelsea Flower Show.

In the letter, held in Worcestershire Archives, Millet described the 1st class rooms as:

“larger than the ordinary hotel room and much more luxurious with wooden bedsteads, dressing tables, hot and cold water, etc., etc., electric fans, electric heater and all. The suites with their damask hangings and mahogany oak furniture are really very sumptuous and tasteful… You can have no idea of the spaciousness of this ship and the extent and size of the decks.”

A single-person berth in first class cost between £30 (£3,000 today) and £870 (£87,000). First-class passengers enjoyed access to a gymnasium, a squash court, a saltwater swimming pool, electric and Turkish baths, a barbershop, kennels for their dogs, elevators, and both open and enclosed promenades. Many first-class passengers also travelled with personal staff: valets, maids, nurses chauffeurs, and cooks.

The first-class passenger list included American socialites, members of the British aristocracy, and wealthy industrialists and business men from America and Britain and their families, and even a silent film actress, as well as White Star Line’s managing director J Bruce Ismay and the ship’s designer, Thomas Andrews. 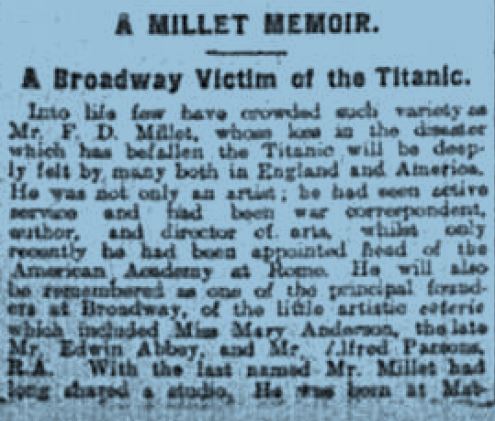 Titanic Survivor Archibald Gracie gave evidence to the US Senate enquiry that after the ship struck the iceberg, he saw both Butt and Millet playing cards in the Smoking Room in the company of two other men. Yet an article by the Smithsonian states both men were last seen giving up their life preservers to women passengers shortly before the ship sank.

Millet’s body was later recovered from the sea by the crew of the cable ship MacKay Bennett along with 305 others, and was taken to Halifax, Nova Scotia. He was returned to East Bridgewater, Massachusetts, where he was buried in Central Cemetery.

Millet left a $10,000 estate to his widow Elizabeth Greely Merrill Millet (aka Lily) who lived until 1932. He was survived by Lily, two daughters, Kate and Florence, and his son John who still lived at home.

In honour of Frank Millet and Archibald Butt a memorial fountain and monument were dedicated in October 1913 in the President’s Park of the White House, in Washington DC. This features a relief on one side to represent Major Butt and his relationship to the army, and on the other side a relief of a palette to represent Millet’s artistic notoriety.

Meanwhile, here in Worcestershire a memorial was erected at the Saxon church of St Eadburgha’s on the Snowshill Road in Broadway. A lychgate there dedicated to Frank Millet was erected in 1932, twenty years after the Titanic disaster on instruction from Millet’s son John Alfred “Jack” Parsons Millet. The inscription devised by two Harvard classics professors in Latin translates as:

“To Francis Davis Millet – A man of outstanding attainment in literature and art who, when the ship Titanic was sunk, gladly faced death while bringing hope to those in great need. His intimate friends have had this memorial erected in memory of a dear friendship.”

Geoff Tibballs Ed., Voices From The Titanic: The Epic Story Of The Tragedy From The People Who Were There

Alastair Walker, Four Thousand Lives Lost: The Inquiries Of Lord Mersey Into The Dinking Of The Titanic, The Empress Of Ireland, The Falaba And The Lusitania