Back to the Forest – Excavating a WWII site 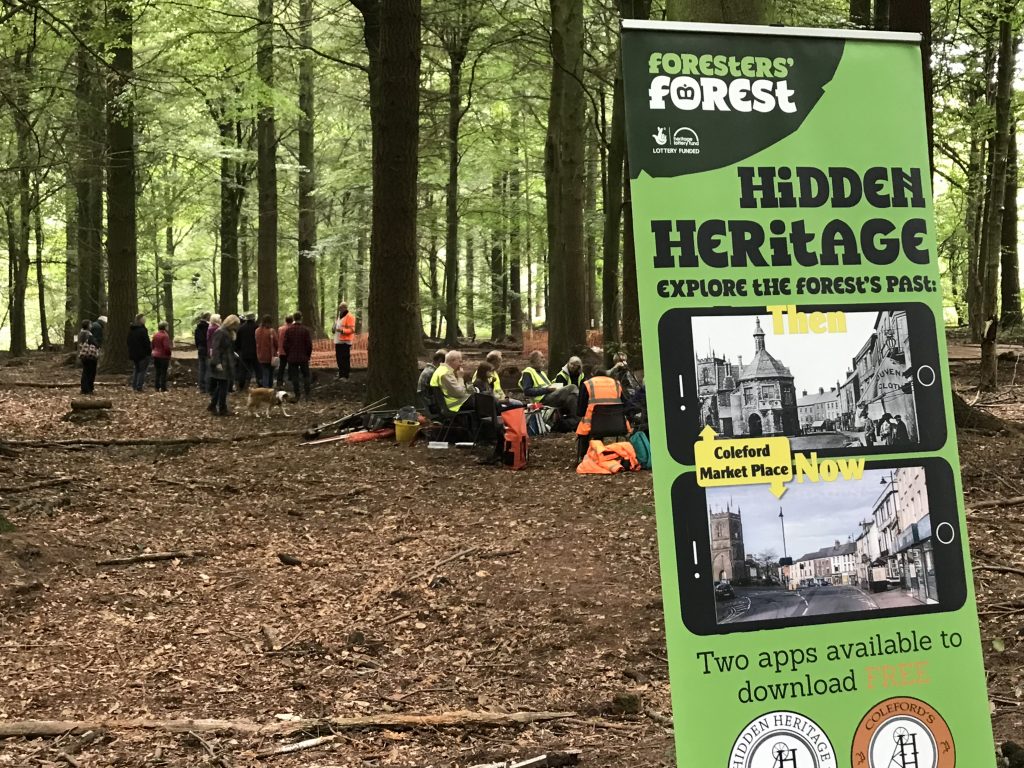 For the past 5 years we have been working in the Forest of Dean as part of the Foresters’ Forest Project. There are numerous strands to this Heritage Lottery funded landscape project, raising awareness and participation in the built, natural and cultural heritage that makes the Forest special. This has included a series of five community excavations, where local people have been able to have a go at archaeology and help answer questions about different sites.

After completing the Mile End Enclosure dig this September, without finding the remains of the Roman site we had hoped for, we changed direction to make the most of the final archaeological dig of the project in October.

We shifted a few miles down the road to woodlands in Broadwell near Worcester Walk to survey, excavate, and generally investigate the widespread remains of a World War 2 camp about which little is documented.  The site is located in woodland, alongside where Woodville Avenue meets Worcester Walk.

Over the course of the project, we have trained volunteers as part of the the Buried Heritage project, so they now have excellent archaeological skills. Many of them have returned each year. Some of the volunteers are also members of the Dean Archaeology Group (DAG) so they have been using these enhanced skills on other DAG activities.

Before the dig, we knew there were various hut bases, paths, and the base of a possible watchtower.  The site is well known locally, and on the Public Open Day, we were delighted to greet plenty of residents who turned up to view what the volunteer archaeologists had unearthed and, perhaps more importantly, to share stories they knew about the camp. 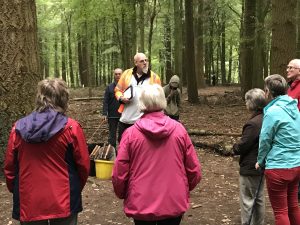 Robin Jackson, who has overseen the Buried Heritage project, said that Historic England had previously mapped some of the site using aerial photographs but that this dig was about unearthing structures that have been hidden under tree cover beneath years of vegetation. Very little would have been recorded about the camp for fear of details falling into the wrong hands during the war, and military sites were not allowed to be photographed.

Local historian Terry Halford informed the team that the camp closed in 1958 and the buildings demolished. Terry shared with us many details he has gathered about the site, including some old photos of the camp. 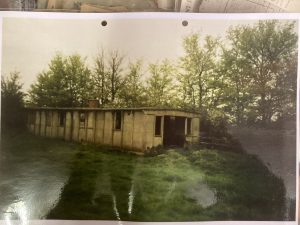 The type of hut at the Mile End camp

This information was gathered from local historians (Karl Green and Terry Halford) and residents who joined us on the open day.

The remains of 30 building structures were unearthed during the dig, many of which had not previously been mapped and all of which pose many questions about their purpose. Through the dig, they have all been recorded to be added to Gloucestershire Historic Environment Record (HER –an archaeology database) so that the information is recorded and available in the future.

Jo Watkins is the daughter of a lady who used to clean the uniforms of American soldiers. She attended the Open Day to bring examples of some American uniform badges that her mother had and donated these to Nicola Wynn, Collections Officer at the Dean Heritage Centre to display.

It was wonderful to talk to people with those stories and mementoes. The advantage of a dig of this period is that we can talk to people in a way we can’t with Prehistoric or Roman sites! 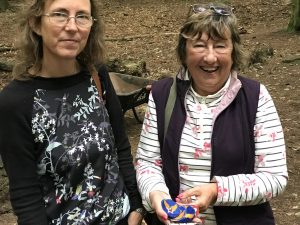 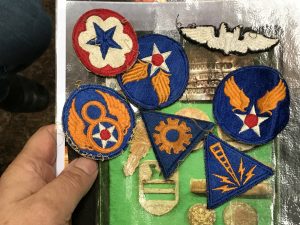 There was evidence that some of the buildings were classic Nissen hut structures built using corrugated iron whilst others were built using a concrete frame and pre-cast concrete slabs. The team are keen to collate information they have collected from local historians, and residents who shared local knowledge during the open day to see how they add to the overall story about the camp.

Photos taken of the concrete building floors revealed are being used by by our archaeologists to create a 3D image of the buildings.

Some graffiti found etched into stone in the entrance to a hut (image courtesy of our archaeologist Ian Mackey).

We are preparing a more detailed report for us to share and in the New Year a member of the team will provide a talk for local residents to explain what they found.

We have really enjoyed these community excavations. The volunteers have been great, being enthusiastic and committed, with many coming back each year. It has been great to hear how some of them have used the skills they’ve learnt as part of their own fieldwork in the Forest.

If you or your group have an idea for community archaeology, we would be happy to talk to you about it. We managed several community excavations over the years. 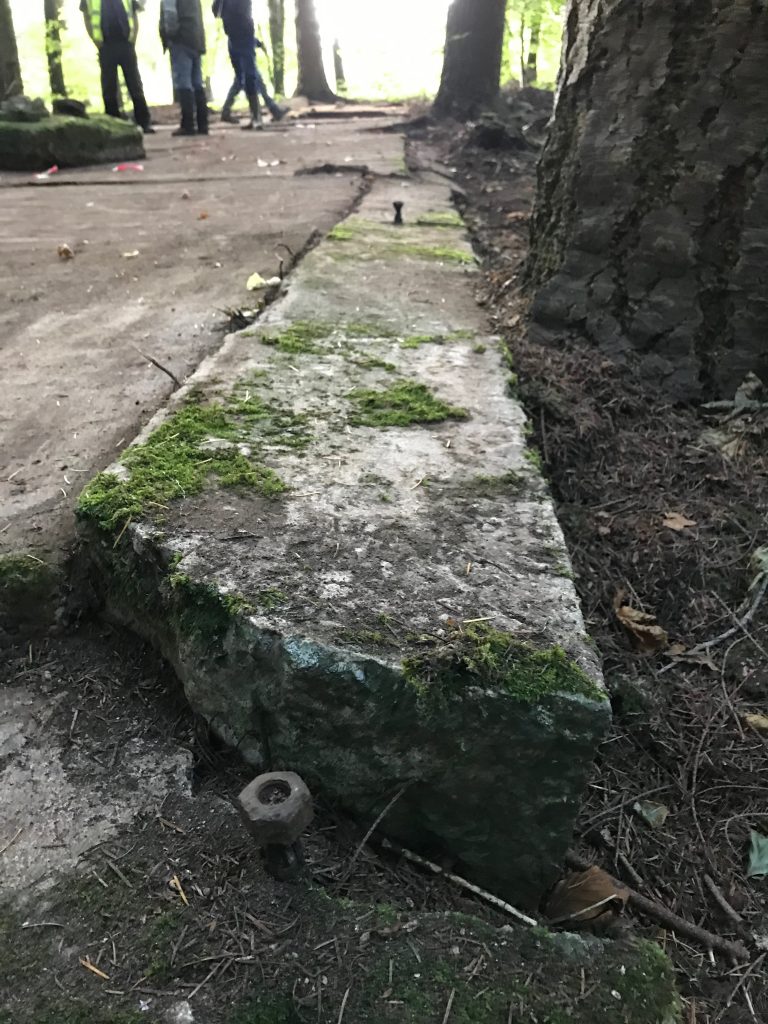 Concrete base of a hut showing the bolts used to secure the corregated iron roofing. Also showing a second concrete slab where the building was extended at one time. 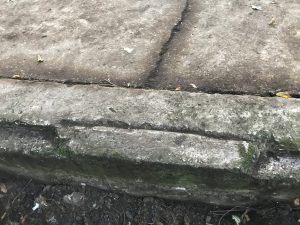 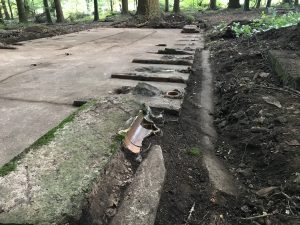 A toilet block showing it was an extension, possibly part of an infirmary block. 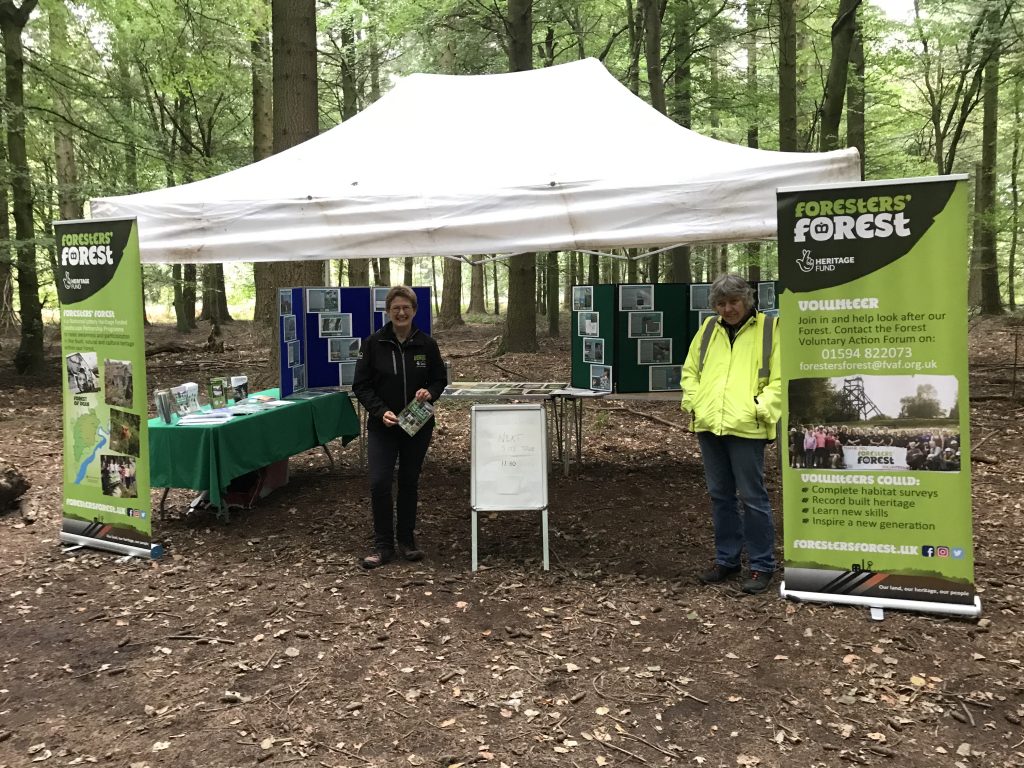 Visit the Forester’s Forest website for information on the project.

We are happy to talk about potential community archaeology projects in your area.
To find out more, email explorethepast@worcestershire.gov.uk