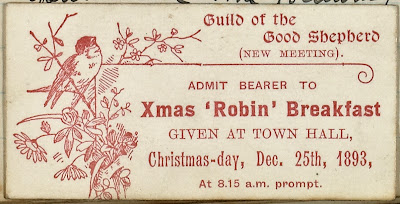 At Christmas time there are often charity appeals to help those less fortunate, and a newly catalogued collection at Worcestershire Archive & Archaeology Service gives a fascinating glimpse into what our Victorian and Edwardian ancestors did. The Guild of the Good Shepherd was comprised of members of the Unitarian’s New Meeting House, Kidderminster. Their aim was to support the poor and needy, by providing food and coal for those in need, and sending flowers to those unwell. In Autumn 1892 a suggestion was made to have a breakfast for children from the poorest families at Christmas. This was agreed to be a good idea, and so a sub-group was set up and the Robin Breakfast was born.

At 7:30am on 26th December 650 children came into Kidderminster Town Hall to receive a breakfast of beef and ham sandwiches, bread and butter, two types of cake and a cup of tea. On the way out they were given a bun, an orange and a Christmas card. Fifty four Guild members helped, some working from 4:30am in the Coffee Tavern preparing food. It was seen as a great success. The society’s report said of the children, “Many of them were in rags and had no hats or caps. Many were also in tears due to the intense cold.” £25 was raised by members, and as the breakfast had cost less than £15 it was decided to use some of the surplus for a soup kitchen for the rest of the winter.

The Robin Breakfasts were then a fixture for future years, but were now held on Christmas Day itself. For a few brief years it changed name to the Robin’s Treat, which was held on a Saturday afternoon after Christmas, and included entertainment, either Punch & Judy or a Magic Lantern Show. However the breakfast soon returned. They almost always made a surplus due to the generosity of local people, with some money over to the next year and the rest used to supply essential goods to needy families. Being careful not to show favouritism they purchased pies and other food from up to ten local shops. 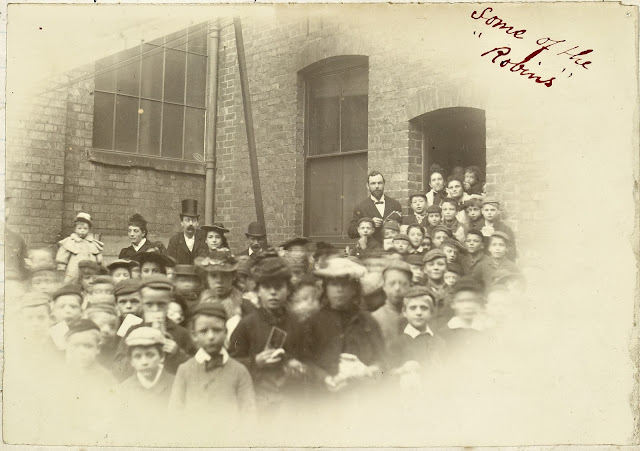 The numbers invited fluctuated between 560 and 1100, depending on number of children they felt they could cope with each year, the economic conditions and how many children they felt needed this. Admittance was usually by ticket, although sometimes the police would suggest children or even bring children they found on the streets that morning too. The list was checked to ensure that those invited were from needy families, with some taken off the list if their parents were in regular work.

The Town Hall was allowed to be used by kind permission of each year’s Mayor, and some years  they would also attend. One Mayor, Mr Tomkinson, gave out 900 newly minted pennies when he visited, which was much appreciated by the children. Father Christmas made an appearance in 1906 for the first time, handing out toys to the smallest children.

The value of this service was evident to all. This comment from 1895, quoted in the Kidderminster Shuttle, was echoed with similar sentiments at other times. “While rejoicing at the sight of so many happy faces, the members of the Guild were only too conscious that the treat was only a brief alleviation of the poverty and want that form the lot of the juvenile guests”. 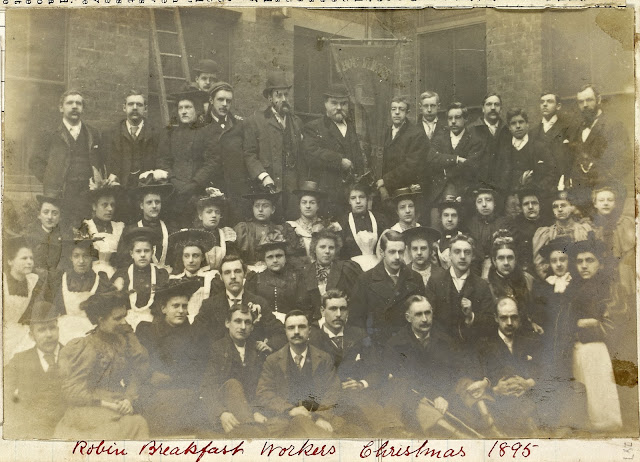 Reading through the society’s minutes you can see how they learnt from experience. After the third breakfast they reported, “We are generally learning to do our work better each year.” After a few years they stopped giving the children a paper bag to put the food in that they took away, as it caused so much litter in the streets. Distribution of tickets changed from being given by teachers to being given directly by Guild members, as they felt that the tickets were used as rewards rather than to deserving children. There are also comments on logistics, with much work at first on Christmas Eve and then from 4:30am in the morning on Christmas Day, but this was refined, helped by a change from sandwiches to pies, so that helpers could leave early Christmas Eve and get there later on Christmas morning. On other occasions references allude to near accidents with the throng of children. However the reports all say how well the breakfasts went off, and how well behaved and appreciative the children were. Although in 1911 they had to remind children not the throw the orange peel about after they’d eaten them.

In 1914, with many away at war and others heavily involved in war work, it was decided not to hold a Robin Breakfast, but to donate £5 from their funds to Nurse Jones’ Christmas Treat. The Guild continued with their charitable work in Kidderminster for many years, but they don’t seem to have revived the Robin Breakfast. We have spoken to Kidderminster residents who remember something similar, so it looks like another group continued the tradition after the war. The Guild’s notebooks and minutes were passed to Worcestershire Archive & Archaeology Service, where they can be seen today (BA13370/11), giving a glimpse into a local charity. 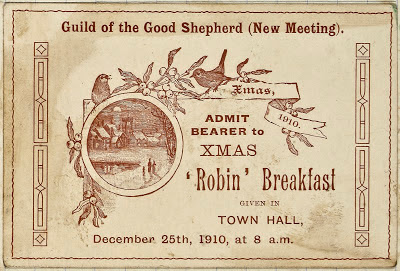