Treasures from Worcestershire’s Past: ~47~ Affidavit for burial in wool 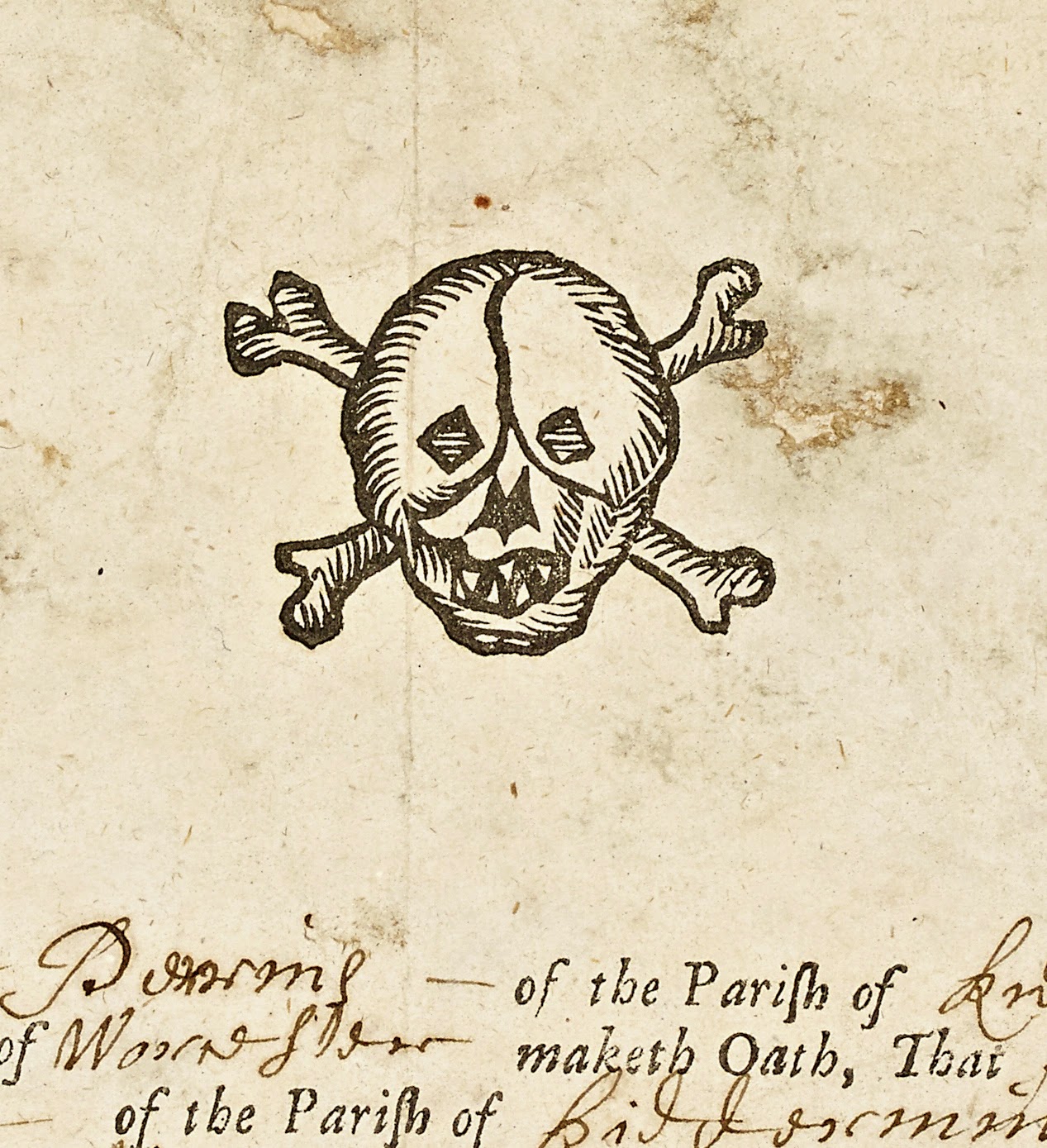 This week’s Treasure has been chosen by David Everett, one of our long-serving regular customers and a member of the Friends of Worcestershire Archives. David came across the following item nestled amongst the records of Stone parish whilst undertaking research in the Original Archive Area at The Hive. The particularly ghoulish illustrations that accompany these documents make them quite fitting for our Halloween post:

The documents we are featuring this week are a series of affidavits from the parish of Stone that date from the 1680s. 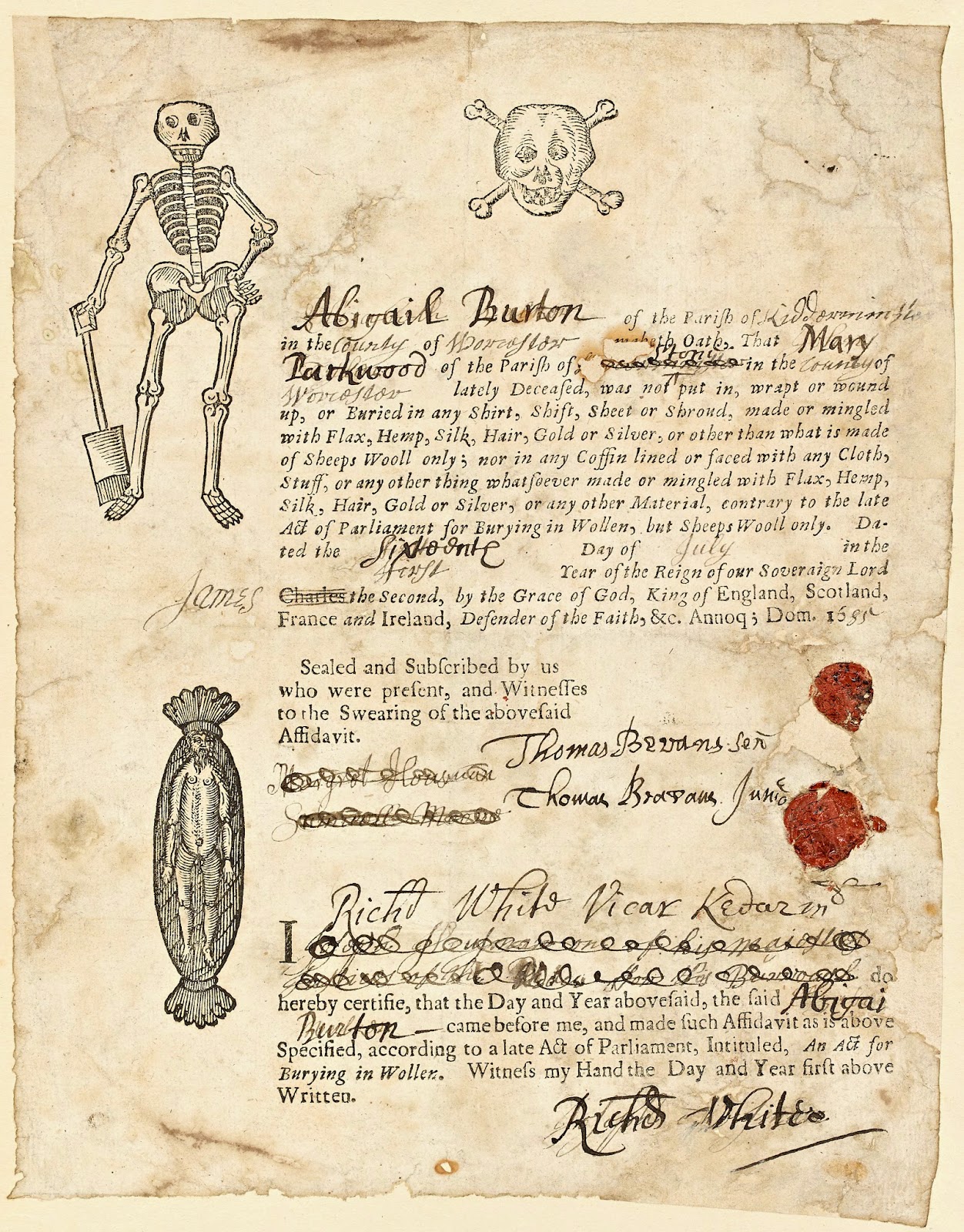 For centuries England relied on the woollen trade as a prosperous source of revenue and was key to the wealth of the country. The introduction of new materials and an increase in foreign imports was viewed by many as a threat to this vital industry. In an attempt to create a new market for woollen cloth, and to maintain the demand for domestically produced wool, the Burial in Woollen Acts were passed as Acts of Parliament (18 & 19 Cha. II c.4 (1666), 30 Cha. II c.3 (1678) and 32 Cha. II c.1 (1680)).

And it is hereby enacted by the Authority aforesaid That from and after the First day of August One thousand six hundred and seaventy eight noe Corps of any person or persons shall be buryed in any Shirt Shift Sheete or Shroud or any thing whatsoever made or mingled with Flax Hempe Silke Haire Gold or Silver or in any Stuffe or thing other then what is made of Sheeps Wooll onely or be putt into any Coffin lined or faced with any sort of Cloath or Stuffe or any other thing whatsoever that is made of any Materiall but Sheeps Wooll onely upon paine of the Forfeiture of Five pounds of lawfull Money of England to be recovered and divided as is hereafter in this Act expressed and directed.[1] 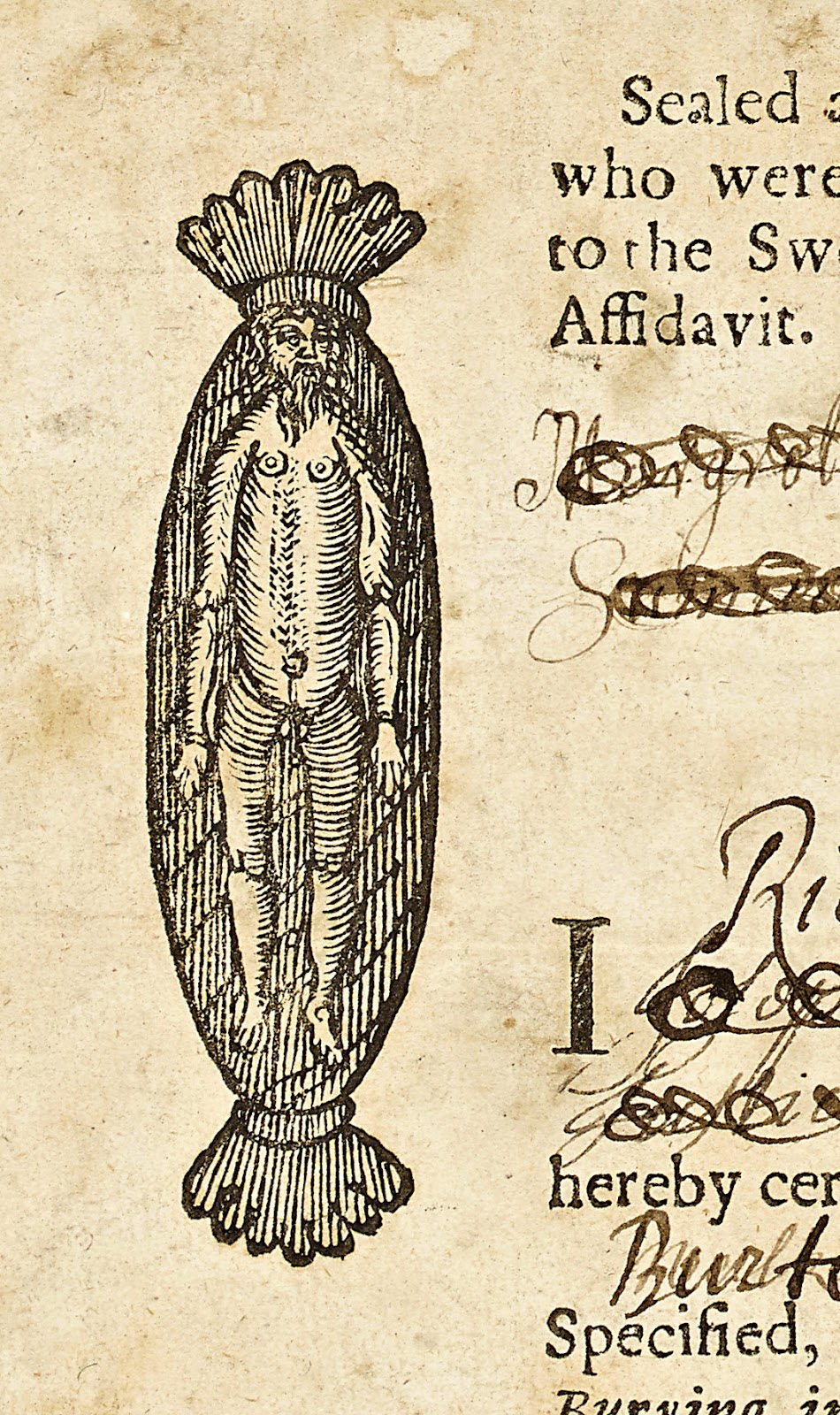 An illustration from an affidavit, which looks like a design for a gruesome, human-shaped sweet.

Failure to comply with the Act was punishable by a £5 penalty. As a point of reference, according to the National Archives’ currency converter tool, £5 in 1680 would have been equivalent to £417.70 in 2005’s money, which is no small sum by any account! 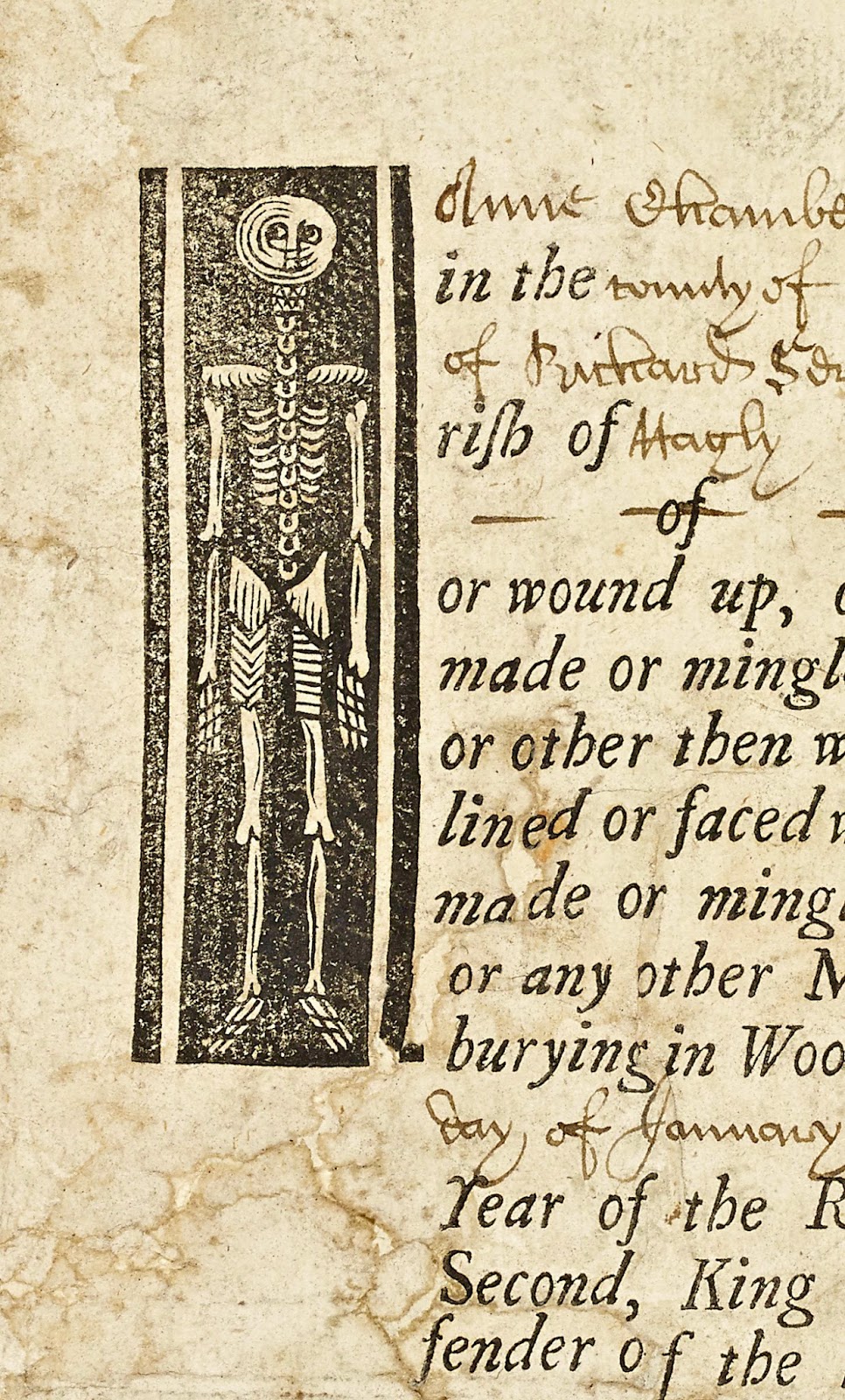 In order to prove that a body was buried in wool, it was a requirement of the Act that an affidavit be sworn in front of a Justice of the Peace of the Mayor by a credible person within 8 days of the burial. If the parish did not have a JP or Mayor then the vicar or curate could administer the oath. David chose this particular item as his Treasure as, apart from the eye-catching illustrations, this was the first time he had encountered an affidavit that was signed by the vicar himself.

The affidavits took various forms depending upon the individual parish. Some parishes began new burial registers to record them in; some had separate volumes for them and others, as is the example at Stone parish, had individual printed forms produced. We are lucky to still have surviving examples of these forms as quite often they were thrown loose into the bottom of the parish chests and later destroyed.

The Burials in Woollen Act was eventually repealed in 1814, although it was generally ignored from 1770 onwards. 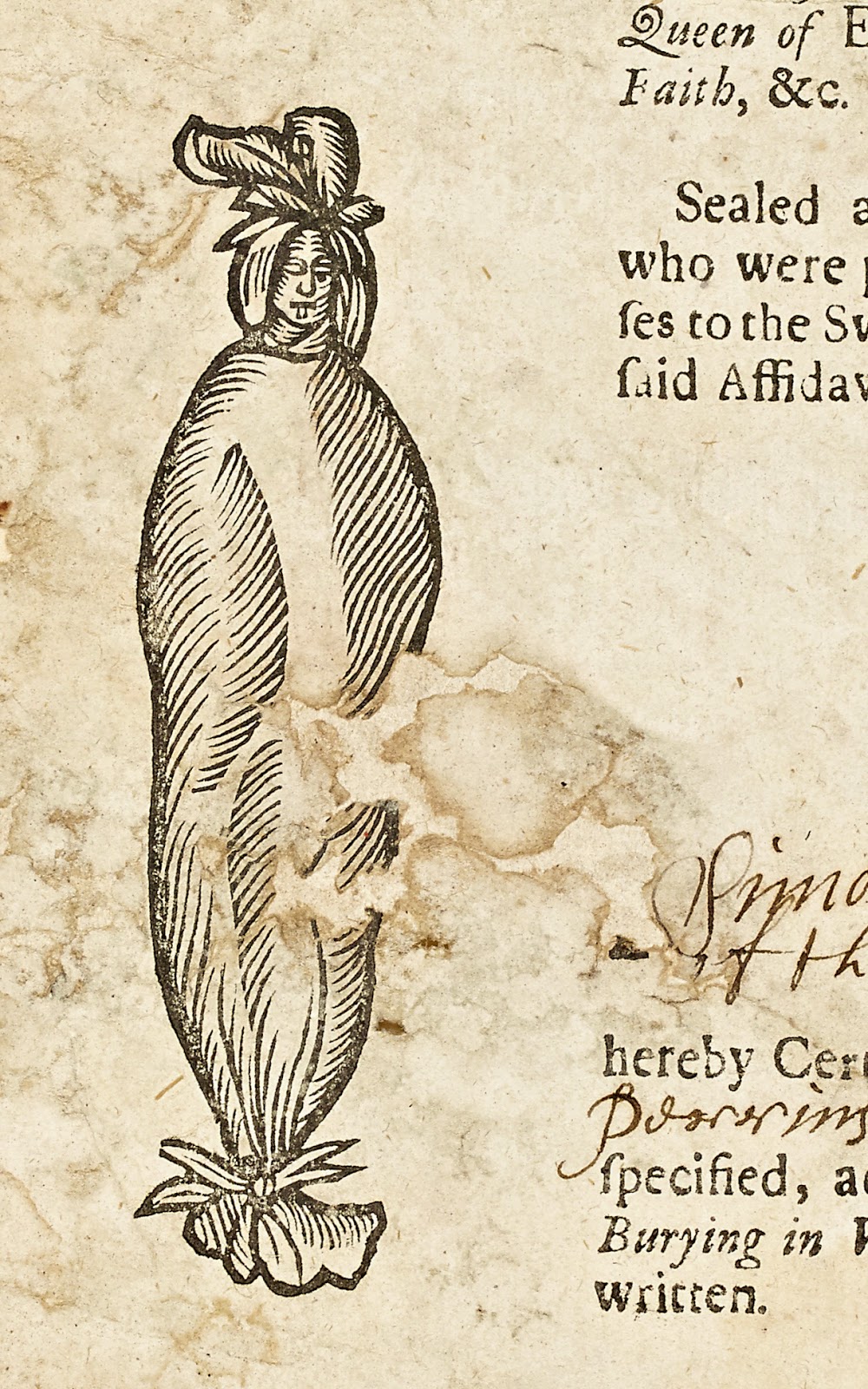 Records of burials in woollen, where they survive, are another great resource for family historians to consult when piecing together the lives of their ancestors and can be a good indicator of economic status – particularly where those not wishing to be buried in wool were willing to pay the £5 fine in order to be buried in finer materials such as lace. The documents featured here can be viewed in our Original Archive Area at The Hive (reference b 850 Stone BA5660/7). 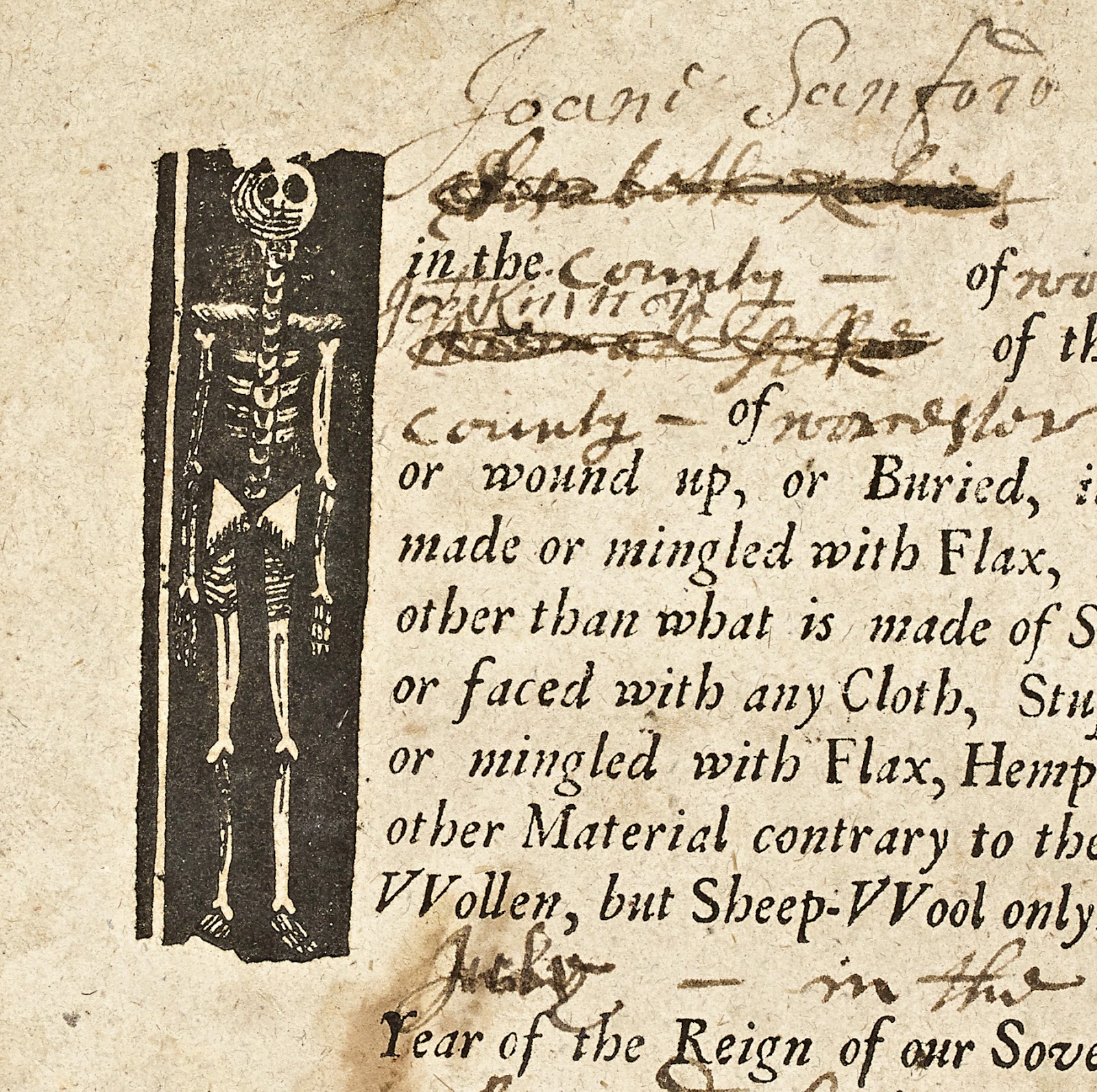 One response to “Treasures from Worcestershire’s Past: ~47~ Affidavit for burial in wool”