UPDATE 20/11/2016: Unfortunately the weather forecast is absolutely horrendous for tomorrow, so we’ve decided to postpone the site tours. The site is very exposed and ground conditions are likely to be treacherous. Besides being unsafe, there’s not going to be much to see (unless you’re particularly keen on puddles) until the rain passes. We’ll re-arrange for later in the week once we (and the site) have all had a chance to dry out! We’ll let you know the revised date as soon as its confirmed. Apologies for the inconvenience. 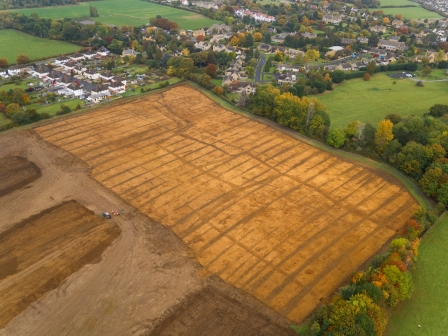 The site from the air. Photo by Adam Stanford of Aerial-Cam Ltd Worcestershire Archive and Archaeology Service are carrying out an archaeological excavation in Broadway as part of the works for the Environment Agency’s Badsey Brook Flood risk management scheme. It’s proving to be an exciting site! 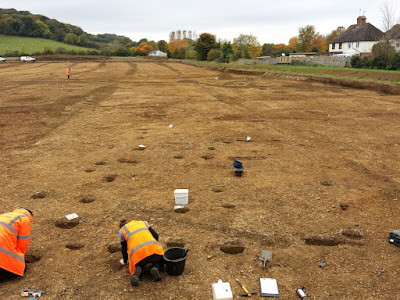 We’re holding two open days, on Friday 18th November and Monday 21st November, 10:00-16:00. It’s an opportunity for residents to come along and visit the excavation, talk to our archaeologists, handle some of the finds, and find out about the fascinating history of their local area at first hand. We’ve got evidence of some of Broadway’s earliest known residents, Mesolithic hunter-gatherers living here around 10,000 years ago. The main focus of the site is a complex Iron Age and Roman settlement, with fantastic Roman finds emerging. 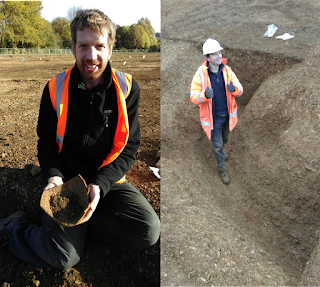 Graham holds the base of a Roman jar, and Tim stands at the bottom of an enclosure ditch The site can be accessed on foot from the village via footpaths (dotted lines on map) from Cheltenham Road or Church Street, or from the site car park on West End Lane. If using SatNav, postcode WR12 7JP will take you to about 100m to the southeast of the car park entrance. 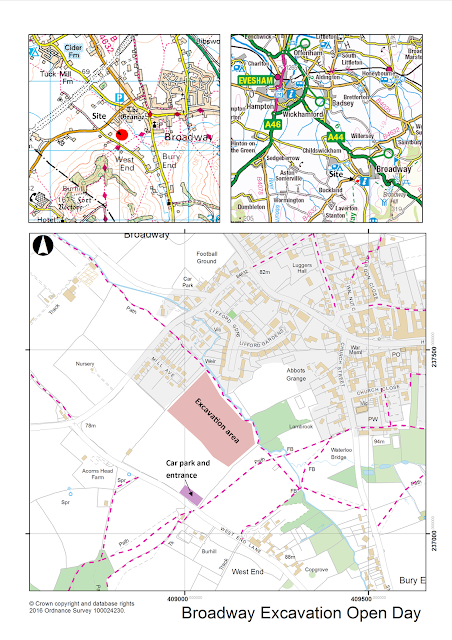 Stout footwear is advised, as the site may be muddy! Visitors should gather by the site cabins next to the car park, where artefacts will be on display. Tours of the site, starting from the site cabins, will be conducted by the archaeologists. There’s no need to book – just drop in and find out more about the thousands of years of history beneath your feet!