Worcestershire Archive Service is in the process of cataloguing a collection of four volumes that were deposited with us by Homery Folkes, an architect, local historian and noted antiquarian. These volumes contain newspaper cuttings, postcards, photographs and drawings reproducing architectural details and images from nature.  Obviously the work of someone very interested in architecture – an architect perhaps?

These beautiful pencil drawings show the artistry and talent of the person who created it.  A person, possessing such skill in observing and reproducing fine detail, could perhaps be considered a true artist. An example of the fine drawings contained within the sketchbooks

So, who was the artist?  On first receiving the deposit staff originally attributed it to Tom Grazebrook, but our paperwork shows that, upon Homery Folkes insistence, the volumes were later attributed to Phillip Grazebrook.  The depositor perhaps based his assertion upon the initials found on the front of two of the volumes; JPG appears in Gothesized text.  Our paperwork relating to this acquisition states “4 architectural sketchbooks of Philip Grazebrook, architect, of Hagley”, however, on the inside covers of one of these volumes it states: “Tom Grazebrook Nov/95”.  Upon inspection we have found that all of these images are consistent in style and level of execution suggesting that they were created by one person alone.  So who was the creator? Phillip or Tom?

The only clues that we have, in terms of dates, is Nov/95, which we take to be November 1895, and a watercolour of battleships dated 1917. With these dates as a point of reference we took a look at the 1911 and 1901 census and found no trace of a Philip Grazebrook listed, whereas a John Philip was recorded as living at the Court, Hagley.  At this point he was 75 years of age, living with his wife Harriet, son William and daughter Ellen. Far from being an architect his profession was given as retired iron master. In the 1881 census John P. was listed as head of the household with 3 children, including a 19 year old Tom whose profession was given as architect.  Also on Ancestry there is an entry on the National Probate Calendar for John Phillips Grazebrook, who died on March 1919, and one of the executors is identified as Tom Grazebrook, architect.

Could John Phillip/s be our artist?  It is possible that a successful iron master would still be interested in design and would like to contribute ideas to those who developed products but it is unlikely that so many fine and precise architectural details would have been reproduced in iron work.  These volumes are far more than a catalogue of designs – they were obviously created by someone who had a passion for architecture. 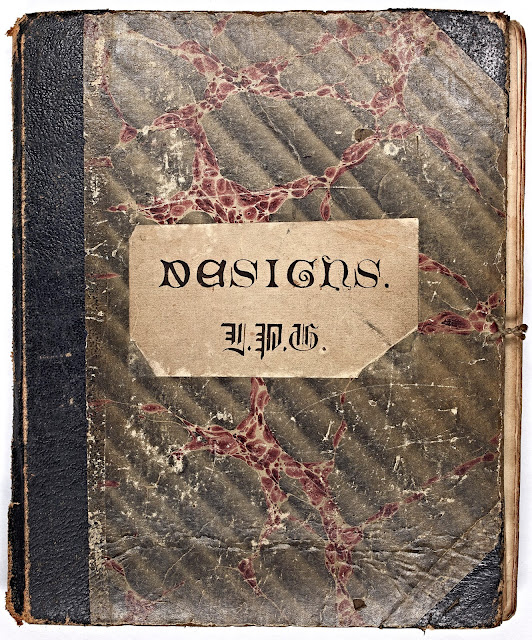 The front cover of one of the Grazebrook sketchbooks, featuring the initials JPG.

Looking at the Kelly’s trade directory of 1912 both J.P and Tom Grazebrook were listed as being at the Court, Hagley.  The 1911 census showed Tom to be living at the Dene, Pedmore.  Perhaps the entry in Kelly’s referred to Tom’s business address.  If he were working from his parent’s home then it could explain why Tom would use volumes, with his father’s initials upon, in which to make his drawings.

Tom Grazebrook (1862-1949) seems to have been a successful architect.  He designed the church of St Saviours, Lower Hagley in a mixed style owing much to the Arts and Crafts tradition; a number of projects providing model housing for the poor; Bluebell Park Cottages at Wrens Nest (1902-3); workmen’s dwellings Vicarage Road, Wollaston (1905-7) and Urban District Council housing in Vicarage Road Amblecote (1920-1).  The public buildings that he created included Cemetery Road Board School (1884); the Dispensary Worcester Road, Stourbridge (1893) opened by Lady Cobham; the Victorian Jacobean Netherton Library for the Earl of Dudley (1894); the Tudor style Oldswinford Hospital Great Hall (1905-6); All Saints Home for girls, Clent (1910) and the Guest Hospital of Dudley Outpatients (1915-16).  We believe these volumes must have been Tom’s creation.  So why did Homery Folkes, working in the same profession and in the same locality, attribute these drawings to the wrong person?  Perhaps Phillip was Tom’s family name given in honour of his father? The entry of his baptism at Hagley church provides no record of a middle name.

In trying to find answers we have posed even more questions. Turning to other collections within our archives for further information we looked at a deposit made by Ellen Grazebrook, John’s daughter and Tom’s sister. Included in this is John Phillips’ obituary where it is stated that he was very good at handicrafts and “he excelled in wood carving. In Hagley church there stand two memorials to his ability, the communion table and the footstool”. To be responsible for such an important piece of church furniture shows the level of his skills.  Ellen proudly reported that when her father died his tools were left to Birmingham University and they called him an “engineering genius”.  It could be said that many of the images, contained within the volumes, are of details that would be found in church architecture.  Perhaps John Phillip could be responsible for the collection after all.  If the volumes are to be attributed to Tom then it is obvious from whom his ability came. 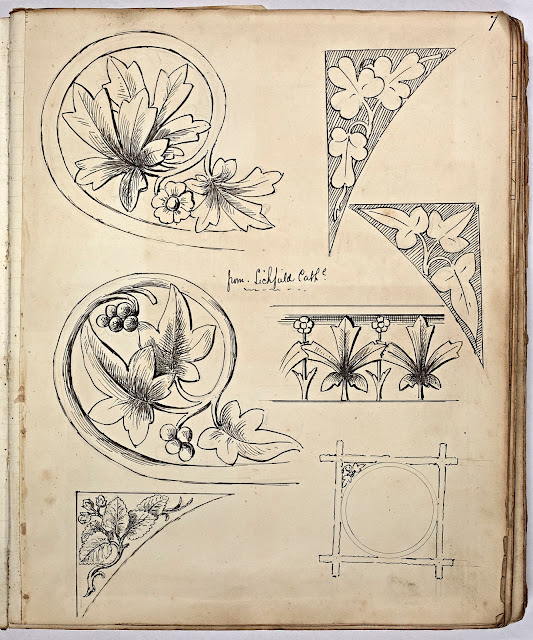 An example of the fine drawings contained within the sketchbooks

We are no nearer to finding the answer but, in the process, we have learnt an enormous amount about two individuals from the past.  What has been so memorable about the research is finding Ellen’s recollections of her father.  She obviously adored him and wrote “In his relationship to his children he was always most affectionate and sympathetic and he looms large in the vista of childish memories”. The image that is created of John Phillip challenges the idea of a distant Victorian father figure and shows one that encourages his children’s interests.

One response to “The Grazebrook sketchbooks”