Birmingham Buttons – Find of the month

We went looking for a Roman Road and all we found were buttons!

In a scruffy corner of an old sports field in Perry Barr, RPS Group asked us to dig some trenches to look for remains of a Roman Road which once passed beneath the proposed location of a new school. There was little left of the ancient routeway beyond remnants of the roadside ditches. But the area had been levelled with a dump of curious waste. It gives us an insight into industrial Birmingham: the workshop of the world.

Birmingham was a major centre in the production of pearl buttons from exotic seashells, which were cut and finished by hand in small workshops across the city. According to a Victorian account of the industry (Turner 1866), the fragility of the material and the skill required in the manufacturing process meant that the making of pearl buttons could not be mechanised. In 1866, the industry still employed around “2000 pairs of hands”, “assisted by nothing but the foot-lathe”. The finest ‘Macassar’ pearl oyster shells were named after a port in South Sulawesi, Indonesia. They were highly prized, and cost up to £160 per ton (equivalent to £20,000 in 2019 prices); the lowest-quality shell fetched just £20 per ton. In 1859, Turner reports, 1800 tons of shell were imported, with a value of around £66,000 (over £8 million in 2019 prices). 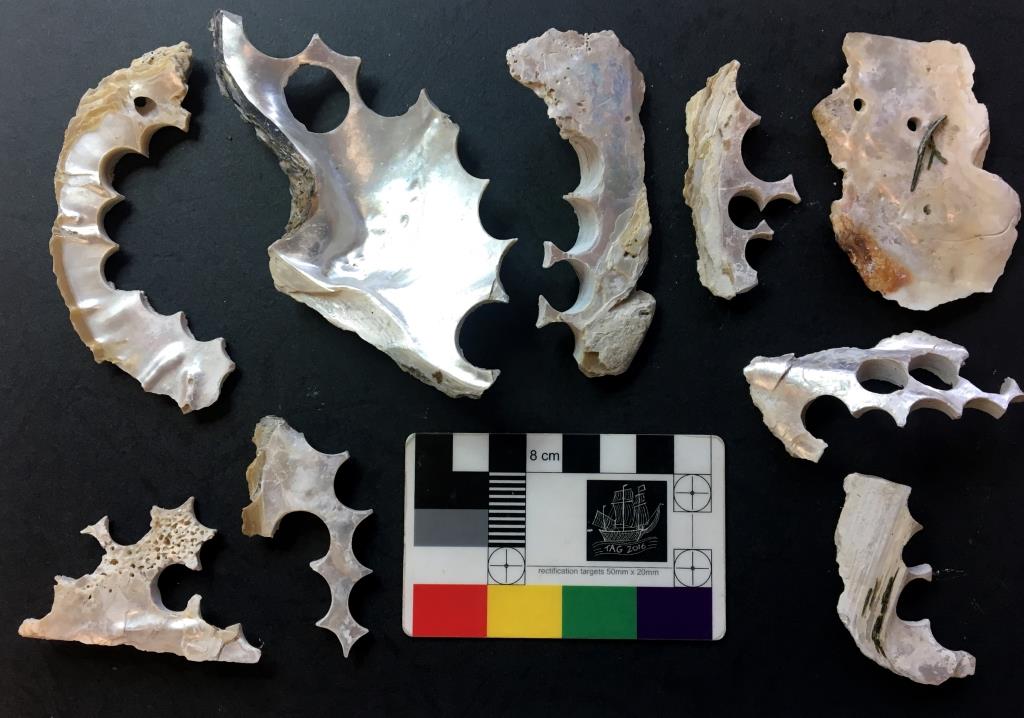 The industry was centred around “a multitude of small makers”. Most workshops employed fewer than 50 people. Delicate and costly raw materials needed skilful hands, and the pearl button makers could earn a decent living. At the top of the scale, Turner records that some earned up to £4 a week. For comparison, that is equivalent to the earnings of a newly-commissioned junior officer in the British Army. But the average wage was lower: around 25 shillings a week, roughly double that of a farmhand. Women, despite doing much the same work, could only expect to take home a third of that amount.

Many of their products were destined for overseas markets, especially the USA: an export slump caused by the American Civil War temporarily depressed the industry. The development of synthetic buttons in the inter-war period triggered the decline in the pearl button industry, but Board of Trade records show that the government was still concerned about overseas competition in the mid-1930s: documents in the Qatar Digital Library include instructions to the British Political Agent in Bahrain, asking him to report on the Indo-Pacific trade in shell for button-making.

Our buttons were mostly made from pearl oyster and commercial top shell (Tectus niloticus), native to the Indo-Pacific region. Top shell was particularly popular in the early 20th century. Several of the blanks show the characteristic pink-and-white mottling of the top shell. However, the ‘Macassar’ pearl oyster and a variety similar to the ‘black shell’ described by Turner are also present. Tiny strands of seaweed still cling to some of the shells. 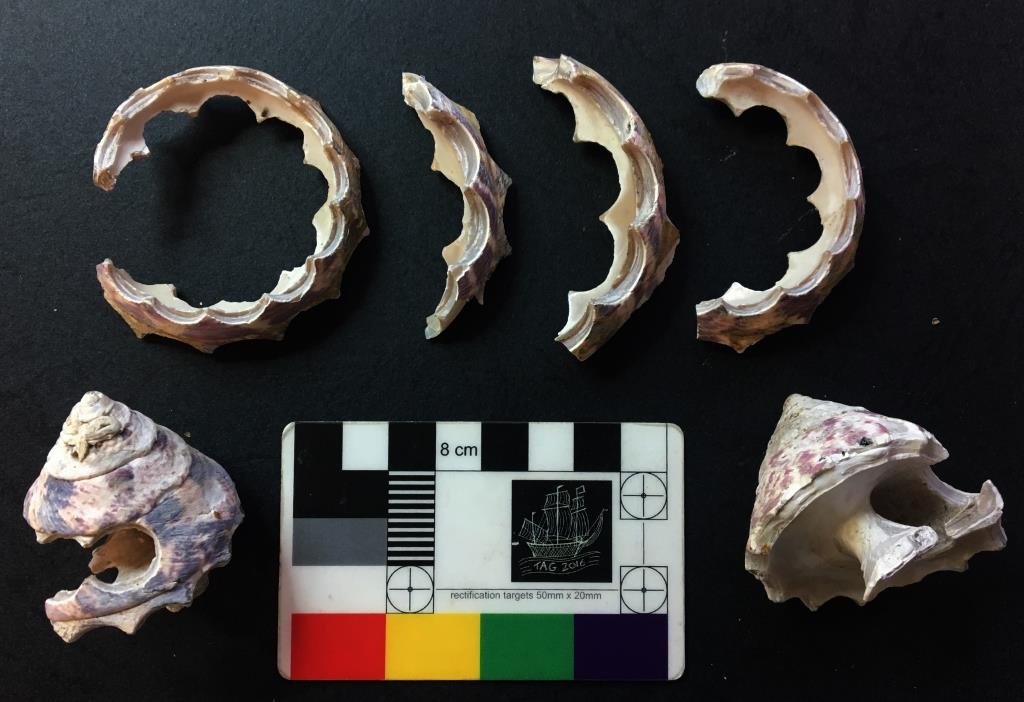 How were they harvested? Records are hard to find, but in the 1970s, scientists from India’s Central Marine Fisheries Research Institute investigated top-shell collection by free-divers in the Andaman and Nicobar Islands:

“Shells are collected from a depth ranging from 6-13 fathom (roughly 11 to 23 metres) by skin diving. The divers… know the rich shell beds in the coastal area and collect the shell during low tide, especially from the mangrove area… divers reach the shell beds by means of dinghy called Sampan or Bonga dongi… in each, 10 adults will be engaged. Such a unit will be able to collect about 100 shells a day. The main fishing season begins by January and lasts till July.” K K Appukuttan 1977

We found a variety of sizes and styles of button. Some are unfinished, abandoned because of an unseen flaw. Others are ‘wasters’ that shattered during manufacture. The outer surface of some had been gently heated prior to drilling, probably to render them easier to work. There are also 3 fragments from delicate decorative buckles. Their general appearance — and the types of shell used — suggest a date range between 1870 and 1940, most probably centred in the early 20th century. 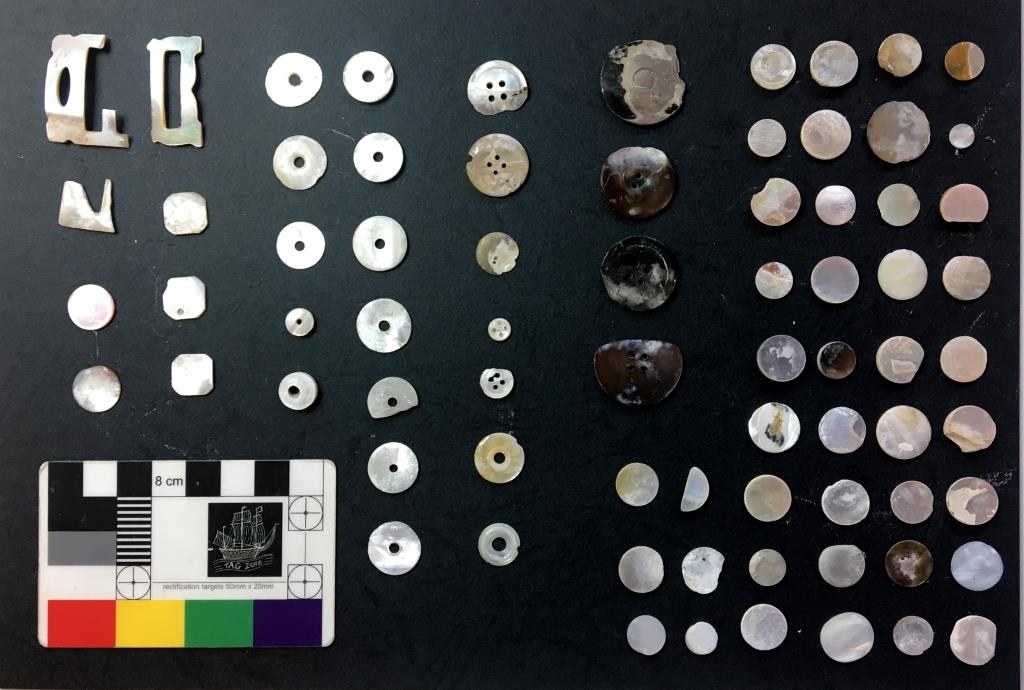 Broken and unfinished buttons and buckles

Perry Barr began to grow as an industrial suburb in the latter part of the 19th century. The nearest button-maker we’ve been able to trace so far is the Regal Button Works Ltd, Grosvenor Road, thought to be situated about 1km to the SW of the site. The Regal Works was a large organisation producing a wide range of buttons, but their advertisements do not mention pearl buttons. Given the small-scale nature of the pearl button industry, it is perhaps more likely that the waste came from a smaller workshop that we’ve not yet tracked down. There’s nothing marked on historic maps of the site, so the material might have been transported from a workshop elsewhere in the city. If you know of any Perry Barr button-makers, we’d love to hear from you!

Archaeologists aren’t just interested in the factories, machines, and cogs of industry: we try to understand the social world of the workshop. Small-scale production was crucial to the importance of the West Midlands during the industrial revolution: innovation driven by groups of craftspeople in a workshop system.

What a story these little buttons tell! A story of human skill and ingenuity: a journey that began with a free-diver fetching fabulous shells from 20 metres under the sea. Ships carried them 10,000 nautical miles to a Birmingham workshop, to be transformed into beautiful buttons. Some travelled another 4000 nautical miles across the Atlantic to the wardrobes of the USA. But these little buttons never made that final step, and have lain for the last century in a field in Perry Barr.

Worcestershire Archaeology would like to thank Susana Parker of RPS Group, who commissioned and managed the work.

8 responses to “Birmingham Buttons – Find of the month”