An unusual find from the Worcester Porcelain factory where you would normally think of richly decorated find pottery such as in January’s find of the month, but it tells an interesting WWII story of how a small component made a big difference in our lives.

What did we find?

Why would we find spark plugs on the site?

A lesser known part of  Royal Worcester Porcelain history is that they made spark plug insulators during the war, and these give a window into this lesser known period of the factory’s work.

In 1939 – the start of the 2nd World War – The Royal Worcester Porcelain Factory started making spark plug bodies (insulators) and in 1941, electrical resistors. Before that, scientific and laboratory porcelain was still being imported into Britain from Germany.

From their work a development into late 1944 was an alumina body for spark plugs which formed the manufacture of spark plugs since then.

They produced spark plugs through until the early 1950’s when they turned more to laboratory and school wares. 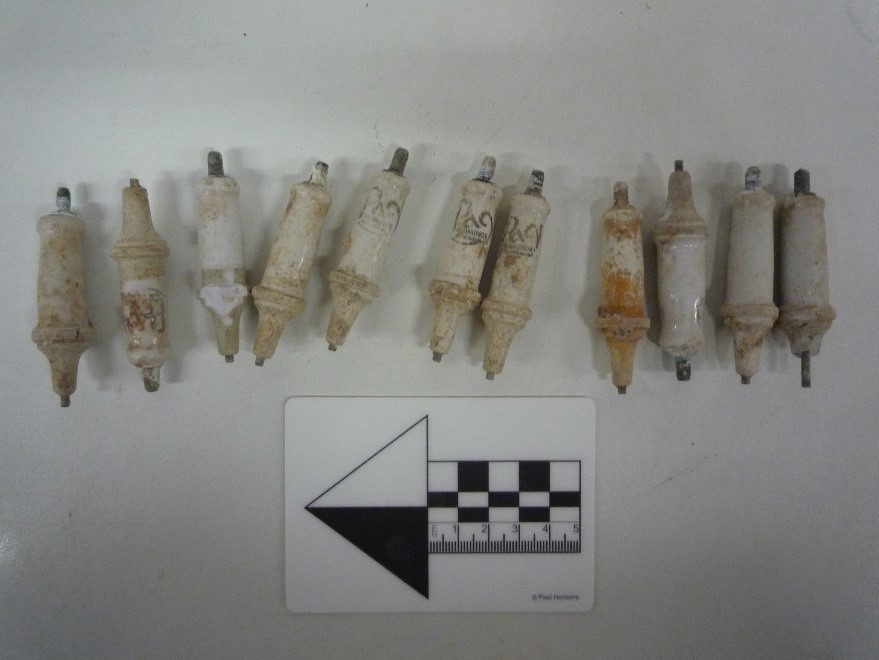 A sample of the spark plugs found

These are marked for two manufacturers– “Pacy” with a few “Firestone” examples. 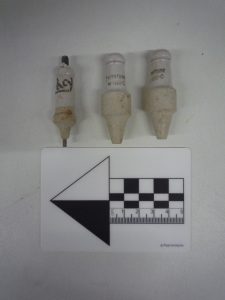 What we found were mostly 18mm diameter spark plugs they would have been used in military applications from generating sets through motorcycles and light vehicles.
Some were manufactured for aircraft engines but none of these type were found at the site.

There are one or two examples that are of a larger 22mm type. These would have been used mainly on American manufactured engines fitted to Agricultural Tractors and Large Haulage vehicles to Heavy Cargo vehicles.

At the height of production, they were turning out 30,000 of these per week! As you can imagine with vehicles from motorbikes up to lorries and generators, the armed forces went through huge numbers of spark plugs, so these were vital for the war effort.

Why did Worcester Porcelain make them?

The “`Pacy’ Aluminox Spark Plug” for motor vehicles were made between 1915 and early 1940s in England. 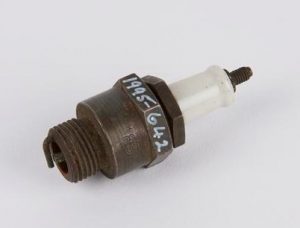 As the name “Aluminox” suggests, the ceramic material contained Aluminium Oxide which made it more efficient at directing the high voltages.  Examples of other research carried out during the war included that of “Ferroelectric Materials and Their Applications to Sensors” and led to the development of piezo-electronic ceramics for laser gyros and, more commonly, electronic lighters for gas hobs, gas fires, etc.

The Firestone spark plugs shown are the M100-C – “the radioactive spark plug”. The spark plugs were produced for Firestone who made electrodes using Polonium 210.  The radioactive Polonium 210 used was supposed to improve engine performance and fuel consumption (apparently it didn’t…) but in any event it had a short ‘half-life’ of just 138 days, which means that three years after they were made virtually all of the radioactivity had decayed and turned into a non-radioactive isotope of lead.

The Worcester Porcelain Works was a natural choice

A small find tells the story of a massive contribution to the war effort.

Who would have thought that our Royal Worcester Porcelain Factory, known for making delicate and colourful table wares, was going to contribute so much to the driving force (pun intended) of the second world war and beyond?

Museum of Royal Worcester & Key dates in their history