The landscape of Worcestershire, like the landscape of many rural counties, is scattered with the remains of buildings and places associated with World War I and World War II military infrastructure, civil defence and commemoration. From airfields, army camps, military hospitals, munitions factories and prisoner of war camps to anti-invasion defences, air raid shelters, drill halls, memorial halls, stabling for horses and allotments, many of these buildings and places have been recorded by volunteer researchers as part of the Council for British Archaeology’s Defence of Britain and Home Front Legacy Projects and the Defence of Worcestershire Project.

Official clearing schemes and the temporary nature of many buildings and structures has already resulted in a high level of loss. Many extant buildings and places remain vulnerable to neglect, decay and re-development. Despite extensive research and programmes of recording there remains buildings and places yet to be discovered. Two recent discoveries include a WWII Bailey Bridge, over Dowles Brook in the Wyre Forest and a reused WWI accommodation hut, known as an Armstrong Hut, in St Johns, Worcester. 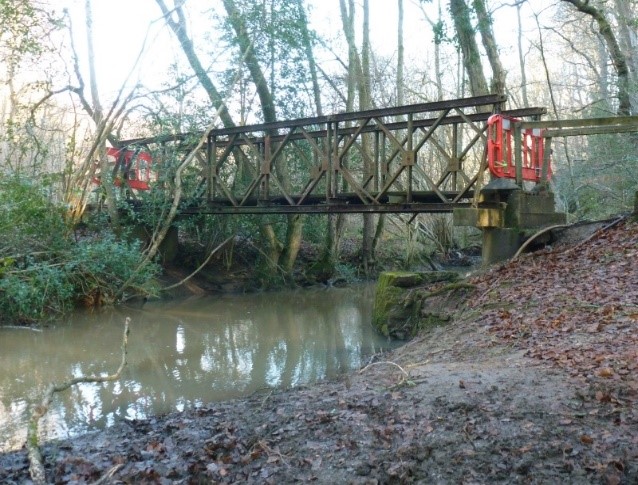 Bailey Bridge was recently re-discovered over Dowles Brook in Wyre Forest. With plans to improve the footpath and crossing the future of this historically significant heritage asset remains uncertain. Photograph © Susan Limbrey

As a rural, inland county, far-removed from the theatre of war, Worcestershire became the temporary home of many military personal in need of convalescence; the tranquil landscape being part of the cure. Properties across the county were offered or requisitioned and hospitals were upgraded or newly constructed to both deal with the expected casualties and respond to medical advances, which included X-Ray and Psychology. It wasn’t just British troops that were stationed in the county. During World War II, Blackmore Park near Malvern was requisitioned by American forces, and two 1,000 bed general hospitals built (Collins and Collins 2008, vii). Three other sites in the area – Brickbarns, Merebrook and Wood Farm – were also set aside for U.S hospitals, each specialising in different types of treatment and surgery (Collins and Collins, 2008, viii). Wolverley Camp, at the Lea Castle Estate in Kidderminster, was also funded by American lend lease funds and, with accommodation for 500 patients, was used by American servicemen until the end of World War II. 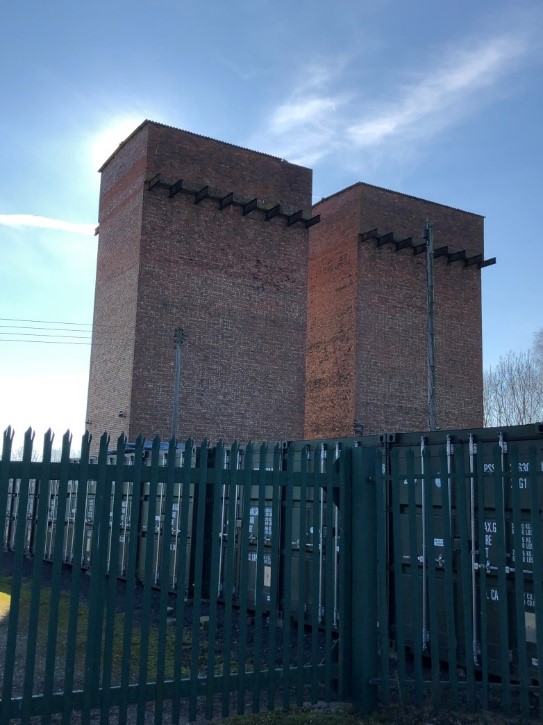 During WWI and WWII Worcestershire was home to allied troops and Prisoners of War, including internees, accommodated in tented or purpose-built camps, built to a standardised plan. These twin water towers are remnants of the US 93rd Military General Hospital camp at Blackmore Park in Hanley Castle, near Malvern. Occupying the site from about 1943 to 1946 (it was later a temporary POW camp) the camp consisted of about 175 facilities blocks and 60 hospital buildings.

The mobilisation of society during both World Wars was complex and required organised administration. Although bombing in Worcestershire was minimal, the county had nevertheless, prepared itself for heavy raids. Schools were requisitioned as emergency feeding stations, and villages had a designated first aid point; most often the Village Hall. Larger villages, towns and cities had first aid posts, manned by health professionals. Factories were requisitioned for military production, manufacturing all manner of munitions as well as staple products such as blankets and jam, and hundreds of acres of pasture was ploughed up or ‘improved’ to increase agricultural production. Several Prisoner of War camps were also established in the county, their rural and often remote locations making it difficult for POWs to escape. Many POWs were accommodated in barrack-style camps and deployed as agricultural labourers. At their peak, in 1946, POWs formed one fifth of the British rural workforce (Custodis 2012, 243).

Worcestershire was also intended to be central to the nation’s resistance movement with Worcester City and Kidderminster designated as anti-tank islands—strongpoints to threaten the flank of an enemy but also to act as ‘honeypots’ to draw them in and allow the regular army to then attack in force (Atkin, 2003, 2). Stop lines were established at strategic points to slow the enemy down should there be an invasion, with pill boxes and anti-tank defences concentrated at nodal points – such as around Pershore – considered to be of high strategic importance. 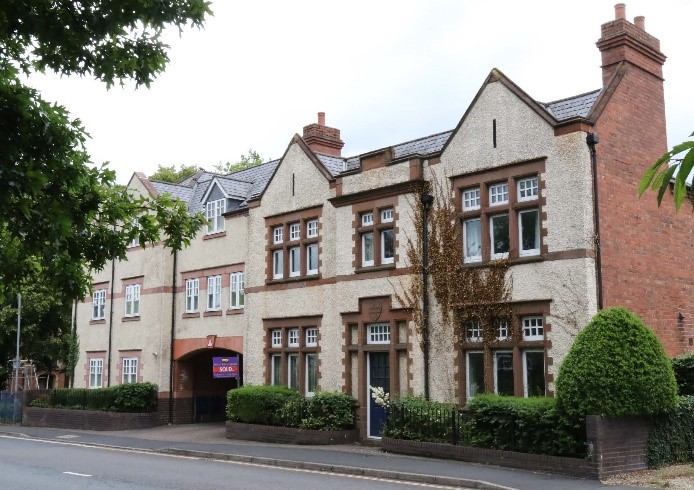 The accommodation block is all that survives of Stourport on Severn’s Drill Hall complex. The HQ of C Company of the 7th Battalion, Worcestershire Regiment and the local Home Guard, the Drill Hall was constructed in 1911 to a design by Pritchard and Pritchard of Kidderminster.

During World War II Worcestershire had been chosen to re-house the government and key government departments and institutions, should London have fallen (Wilks 2007, 22). Both the British and Dutch Royal Families would have also been temporarily accommodated in the county before making their way up through Shropshire to Liverpool, where they would have made their way to Canada.  Many institutions and services were relocated or partially relocated to the county including the BBC, the Telecommunications Research Establishment (TRE), the Air Defence Research and Development Establishment (ADRDE), the Admiralty and the Bank of England. Numerous temporary office buildings (TOBs) and ancillary buildings, such as canteens and air raid shelters, were constructed and housing estates expanded to accommodate workers (including those moving to work in factories) re-locating to the county. 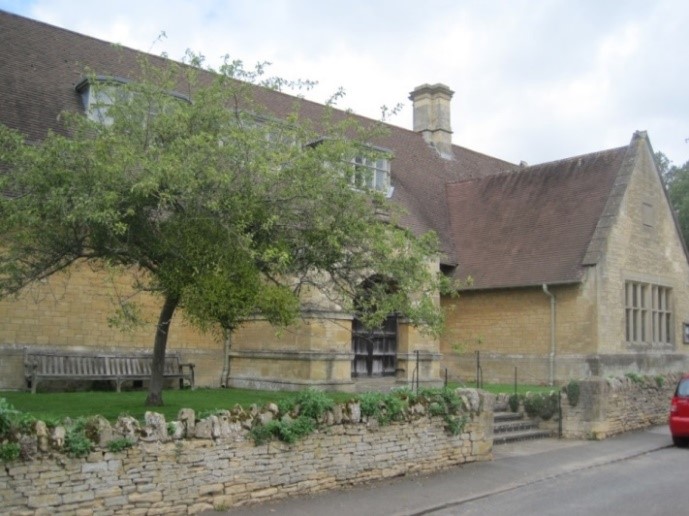 Overbury Village Hall, like Overbury Court and other estate properties belonging to the Holland-Martin family, was requisitioned for use by the Bank of England, from 1940 until 1942. Leased from 1st July 1940 at £50 p.a. plus rates, the hall was used as a typing school for women housed at Northwood. An ‘Unpublished History of the Bank of England (1939-45)’ records that £1,553 was spent on central heating and that, at one point, in January 1941, 30 women were based at the hall (The Bank of England Unpublished War History).

Buildings and places associated with the Cold War are less well documented, with many, until very recently, shrouded in secrecy and without official acknowledgement. As the tensions between East and West escalated, during the Cold War, Worcestershire was appointed one of ten Regional Seats of Government (RSG), in England. Established at the WWII government owned ‘Shadow (Dispersal) Factory’ at Drakelow the RSG was designed to accommodate 300-350 members of staff, link into communications systems such as the BBCs Emergency Broadcasting Network and be capable of self-sufficiency for several months, following a nuclear attack. The site continued in use as a Regional Government Headquarters until 1993/4 when the site was cleared, and land put up for sale. Several Cold War bunkers and listening/transmitting facilities are known across the county, including the BBC built nuclear proof transmitting facility at Wood Norton

Custodis, J 2012 ‘Employing the enemy: the contribution of German and Italian Prisoners of War to British Agriculture during and after the Second World War’. Agricultural History Review 60, No. 2. [Accessed 2019]

Wilks, M 2007 The Defence of Worcestershire and the Southern Approaches to Birmingham in World War II. Hereford: Logaston Press

Paying the price – the early days of market gardening

Starting a new endeavour is rarely easy. Delving into the story of market gardening reveals the challenges faced by the Vale of Evesham’s first growers. These are highlighted by one village’s struggle against high tithe payments – Dr Alan Wadsworth (Worcestershire Farmsteads Project) explores the challenge made against unfair charges in Offenham, just north...