St. Swithun’s church is a fabulous little church that is pretty much central to Worcester. While undergoing renovations, we were asked to carry out archaeological investigations and to record the building.
Having worked with the Churches Conservation Trust (CCT) on St. Swithun’s in the past, we not only carried out the archaeological building survey as a watching brief, but grabbed the opportunity to photograph as much as we could of what the public do not get the chance to see or maybe hadn’t realised was there. So with the help of Brian Hoggard of the CCT , we took a closer look into the nooks and crannies to show you more – and tell you a little bit about what techniques we used.

In the same way that we showed hidden wall paintings in The Kings Head in Monmouth, we are going to show you a fly through view of the roof rafters as only the builders would have seen it, views from bell tower then we work down through the building showing details barely noticeable or visible.

Thanks to Brian Hoggard of the CCT, Jesse Wheeler and Tim Cornah of WAAS and the team working on the restoration for the access and information.
Just to let you know …there are a lot of images in this blog post.

The first documents talking about St Swithun’s talk about land being given for the building in the first half of the 12th century but some people speculate that there could have been a Saxon precursor, due to it being within the Saxon city boundary and the dedication to St Swithun (no archaeological evidence though).  This lovely little church is a remarkably complete example of a mid-18th century Grade I listed building that was dedicated to St.Swithun – the bishop of Winchester. The church was made redundant in 1977 but is one of three under the care remit of the CCT and so we are very happy to get the opportunity to show it from the top down. 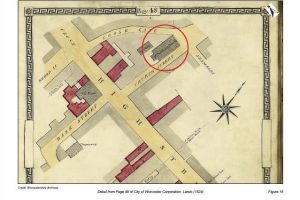 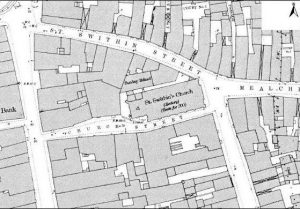 We have posted about our work at St.Swithun’s Church in the past (for example St. Swithun’s day – 15th July) but we have never really had the opportunity to show you the archaeology hidden, or not always visible, until now where the CCT asked us to carry out this investigation.

St.Swithun’s – from the top down

To help with the described orientation of the photos, here is an aerial image facing north. 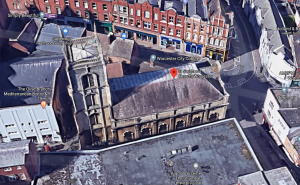 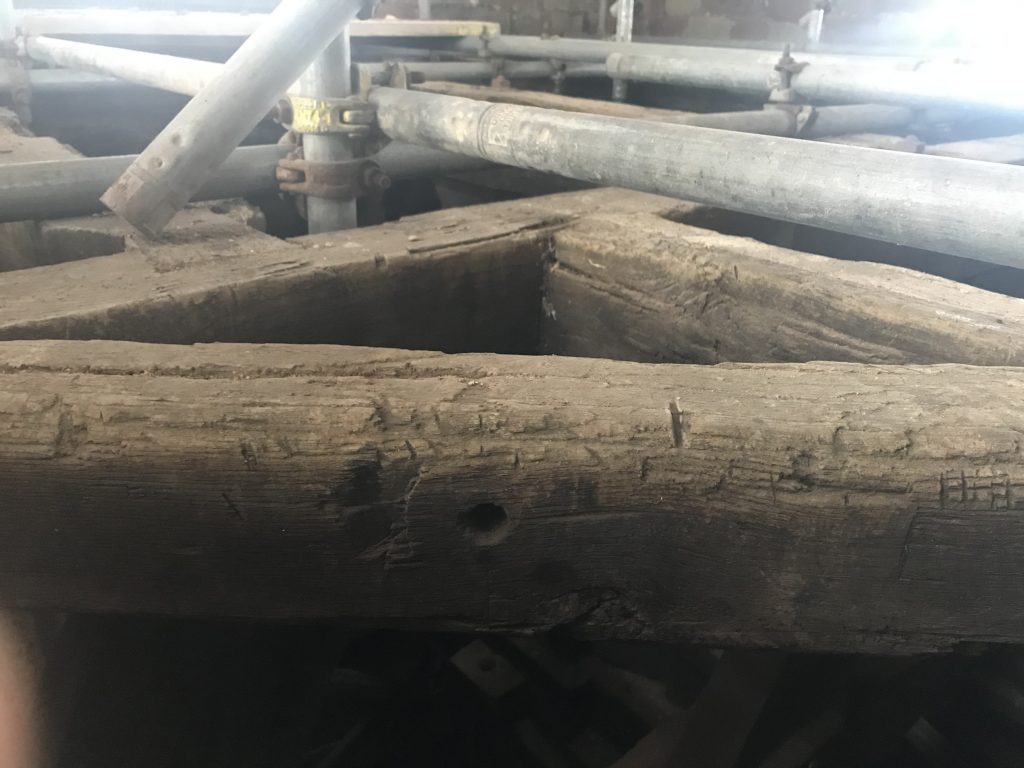 The bell tower and the views

The tower and bell tower that you see today are extensions up built in the 15th century. The tower itself dates to around the 13th century with the narrow staircase (narrowing to around 50cm) going to the top of the belltower which used to be a spire.

The views are spectacular and looking around Worcester, the Cathedral can clearly be seen to the south so those working on St. Swithun’s would have seen the original Cathedral structure (built around 1084) but the view today is no less impressive – though the foreground is very different.

The vistas around the city are just as spectacular:

In this panorama facing north, you can see the roof of The Hive about 1/4 of the way across.  The spire in the centre is that of The Church of St. Nicholas – The Cross – a Grade II listed building now a bar and restaurant.

In this panorama, by the right pinnacle on the horizon you can make out Fort Royal park. By the left pinnacle, the railway is just about visible.

In the centre, just above the roof covering, you can see the medieval rooflines on the right of Mealcheapen Street down to Reindeer Court.
What you can see from the close-up, below, is the rickety roof lines of the medieval Mealcheapen Street. Under the street is a bricked-up passage going north – south where Catholic worshipers would be hidden as they made their way to a church service held covertly. 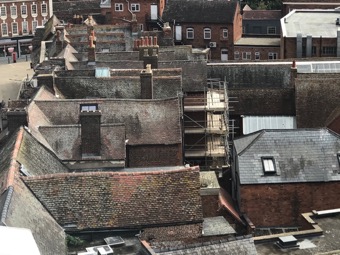 The bell chamber and roof 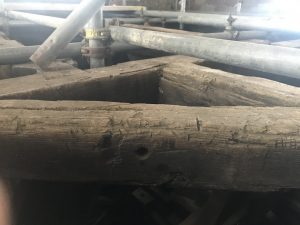 View down onto the bell tower timbers 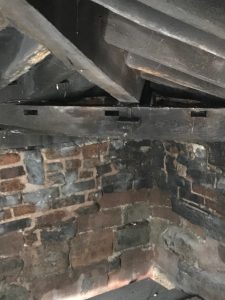 The roof and the roof void 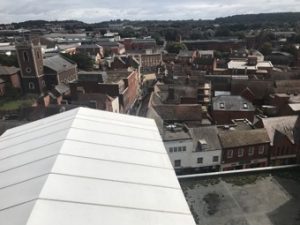 This view to the east shows the temporary roof covering, very cleverly erected to cover the entire building so the tiles could be removed and stored for the beams to be checked and renovated as necessary, then replaced over a fully restored roof structure.

While the roof was being prepared, our Tim Cornah took the opportunity use photogrammetry* to see a reconstruction of the roof structure as it was built over 300 years

*Photogrammetry is a technological practice that essentially enables you to stitch together multiple photographs to form an alternative view of an object or area – it uses photographs from at least two different vantage points in a similar way to how your eyes work, it helps obtain depth and perspective. 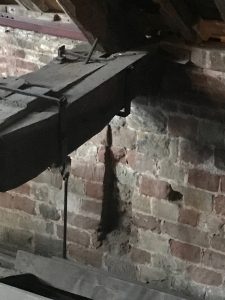 In surveying the roof, it was clear that the poor thing was sagging with age – don’t we all. 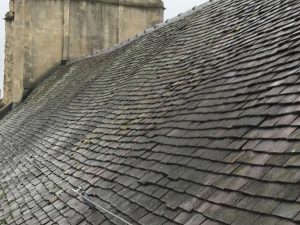 So the renovation work being carried out will sustain the original structure and modernise it at the same time.

The roofwork to the right is the original 18th century housing for the clock that you can see in this 1877 view of St.Swithun’s from the Worcester Herald, showing the clock on the east end of roof (picture in our archives). 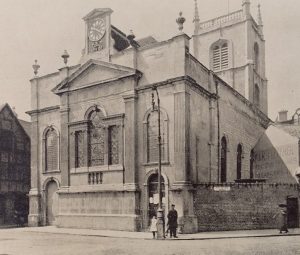 Renovation of the guttering was needed too as potential leaks became more of a concern.  As you can see below, the renovation too this into account and the old brittle lead was removed and replaced while modern protective layer is put over the original timbers and the original timbers re-used wherever possible. 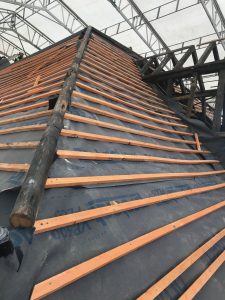 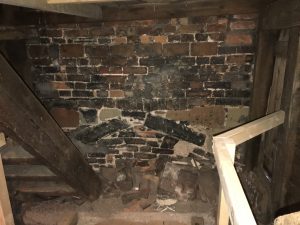 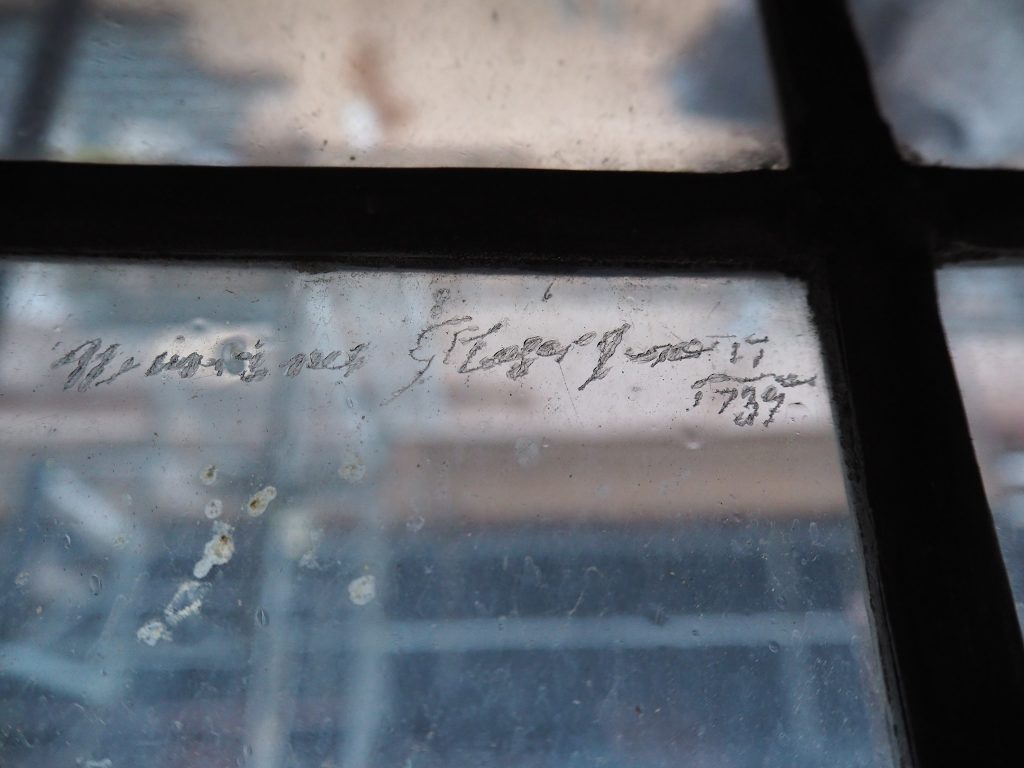 Graffiti etched into a ground-floor window

Graffiti in the belltower stairs

The team that kindly allowed access and took us through the excavations – Jesse Wheeler and Tim Cornah of WAAS and Brian Hoggard of the CCT,

Look what we found Our archaeology unit was digging in a really small sub-urban area surrounded by agricultural lands in the south of Worcestershire when a sharp-eyed field archaeologist spotted an incredible find …an ancient piece worked flint. You might think that finding a flint shard is not that uncommon and on some sites that...