The famously ill-fated Titanic sank in April 1912. 2,208 people sailed on the maiden voyage of the RMS Titanic, and the ensuing disaster on 15 April 1912 sadly resulted in the deaths of 1,503 people. It may be surprising to know some of the people aboard came from land-locked Worcestershire. An exhibition about the Titanic will be displayed at Worcester Museum and Art Gallery in the summer and with that in mind we wanted to share some of the stories of these people, using sources available here at the Archives.

We learned about eight individuals who either originated from Worcestershire or had been staying here prior to their voyage. Interestingly these are variously male and female, single and married (and also eloping illegitimately). These eight travelled in First, Second and Third Class and one was even an employee of the White Star company. These individuals had various nationalities, were employed doing different jobs and had different reasons for their journeys (emigrating for work or returning home). Not all of them survived that disastrous journey, but all have an interesting life story.

This series of blogs published throughout the month will take a closer look at the eight Worcestershire travellers.

We will begin with a look at Mr Francis Millet an American travelling first class, along with his travelling companion Archibald Butt. He had been living in Broadway, Worcestershire, and was travelling first class, to East Bridgewater, Massachusetts, USA which was entered as his home address although his family were in Broadway, where he owned a property. This gentleman wrote to his friend back in Broadway from the Titanic and our letter has been featured in a previous blog. We will be looking more closely at the gentleman’s life and the memorials to him since his death. 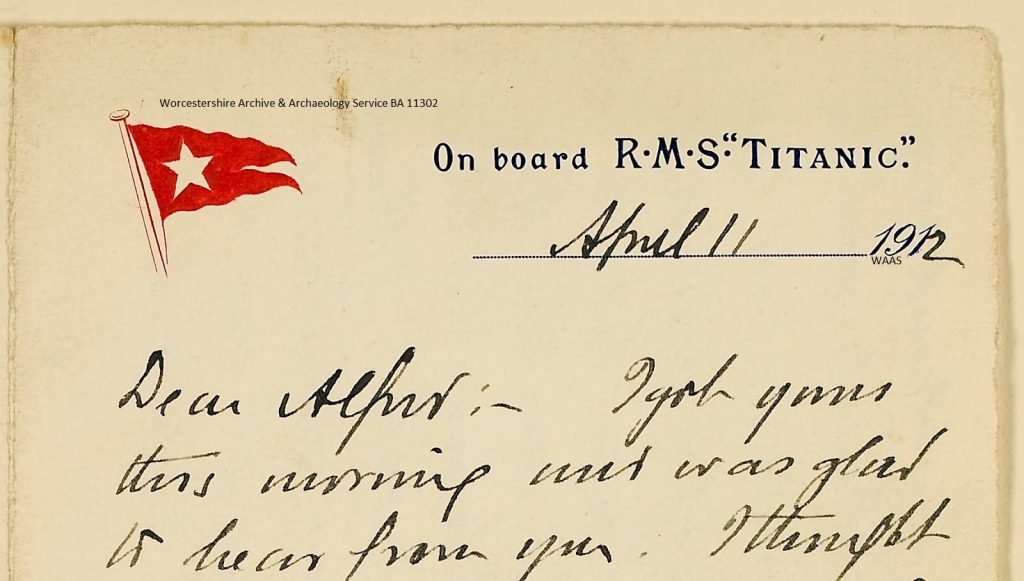 A snippet of the Titanic letter held in Worcestershire Archives held at reference number x705:1235 BA 11302

The second blog will look at Henry Morley (recorded on the passenger list as Mr. Henry Marshall) who was travelling second class with Kate Phillips (as his wife Mrs. Kate Marshall). These two travelling under an alias heading for Los Angeles, have left us an interesting tale of love and betrayal. We will look at their story following Kate Phillips back to Worcester where she returned to give birth.

The third blog will look at Mr Leopold and Mrs Mathilde Françoise Weisz, artists from Bromsgrove. They met when working at the famous Bromgrove Guild which produced artistic pieces for buildings around the world. Mr Weisz from Hungary had returned to England to collect Mrs Weisz originally from Belgium. They were both travelling second class to Montreal, Quebec, Canada where he had been working with his business partner there. There are many newspaper reports about the Weisz couple especially about Mrs Weisz who survived, and we have a collection of plans from the Bromsgrove Guild in the archives.

A fourth blog will look at third class passenger Mr Henry Spinner from the Arboretum in Worcester who was a glover. He had recently been living in Yeovil and was travelling to Gloversville, New York probably for work. The local newspaper on microfilm at the Hive contains information about him, and books about the gloving industry were useful in this research.

Mr Samuel Hemming appears in our fifth blog. He was working on board the ship. Mr Hemming, as a survivor, and member of staff, spoke at the inquest into the sinking of the ship. He was a lamp trimmer, and had originated from Bromsgrove in Worcestershire. Since he spoke in the inquests his words appear in several books about the Titanic.

We hope you enjoy this series of blogs that will be published throughout the month, and that they inspire you to carry out your own research. 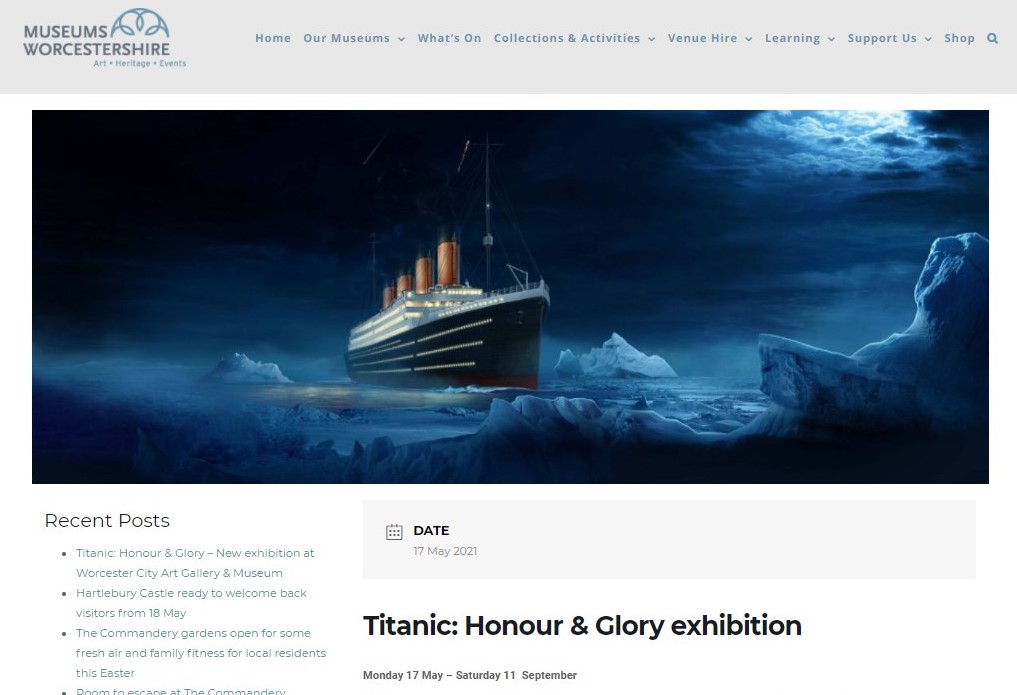