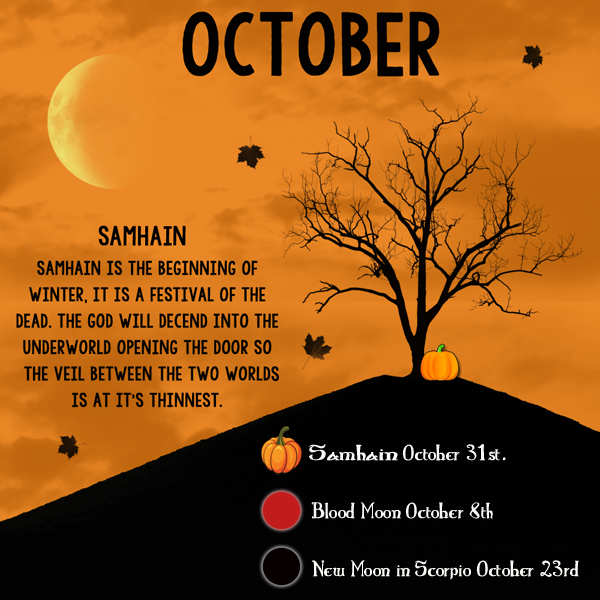 There have been end-of-harvest festivals celebrated around the world for millennia. In the UK Halloween was originally known as Samhain, a Celtic pagan festival to celebrate the end of the year and the end of harvest. It was the beginning of winter and the work on the land was finished. To celebrate, there were great bonfires and feasting, where surplus animals were slaughtered for winter food. These fires were also lit to ensure the renewal of the earth and protect the people. Any crops that remained ungathered were left, as they were believed to have been spoilt.

The Romans had a celebration of Pomona around the end of October. Pomona was a Goddess of the harvest, and also of enchantment. Apples and nuts were particularly sacred to her.

Christian celebration of All Saints’ Day (All Hallows) and All Souls Day were created in the 4th century. This was a feast of the dead, remembering those who had died. This is where we get the name Halloween (All Hallows Eve) and where the tradition of honouring the dead is believed to have begun.

Aspects of all of these parts of our culture are recognisable in our Halloween celebrations today;

Apples; there are many Halloween rituals and games involving apples; toffee apples, apple ducking (fishing an apple out of water, using only your teeth) and superstitions – it was believed that if a young woman threw a complete apple peel over the shoulder, when it landed, it would fall into the initials of her true love, counting the apple pips – ‘he loves me, he loves me not…’ 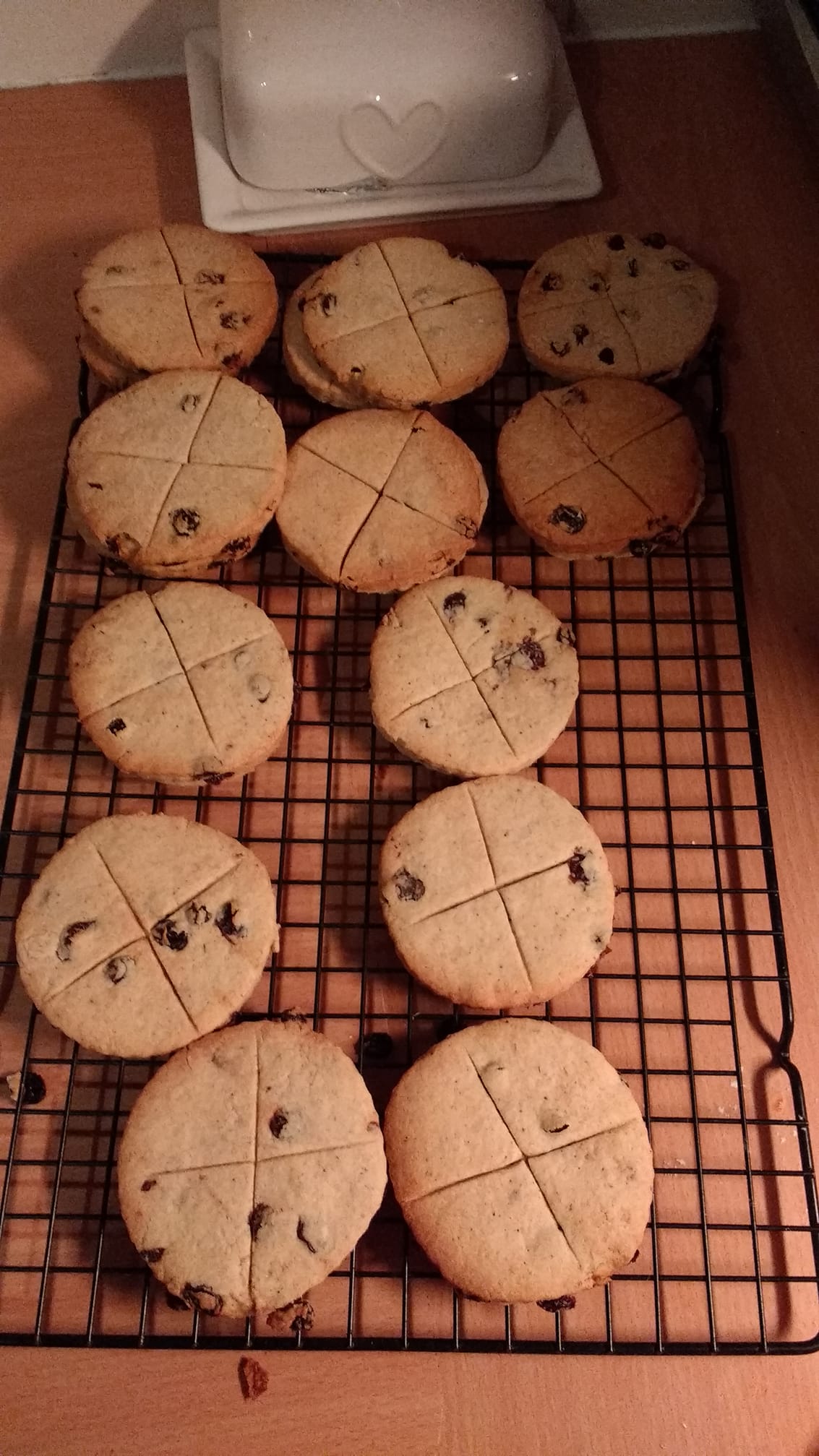 Trick or treating/guising/soul caking; in many parts of England, households baked soul cakes and any visitors took one away with them, on a promise to pray for the soul of the person. This evolved to groups of people (usually children) going from door to door collecting cakes3. From there, the custom of going from house to house began. The mischief comes from another source.

Ghosts, witches and fairies; Halloween was said to be the time of year when the gap between the world of humans and the world of the spirits was very narrow and the spirits and ancestors could return home. Ghosts, witches, fairies and demons were believed to roam the earth and they needed appeasing or else bad luck and pestilence descended upon mortals. A little bit of food was often left out for the ancestors and candles were lit and placed in windows or outside the home to show them the way. This could be the origin of hollowing out a turnip or mangelwurzel and putting a candle in it, although it is also suggested that they were to scary unwary travellers too. These are now more often the much larger pumpkins which are hollowed out, a candle put in them and then left outside. They are much easier to carve than turnips! 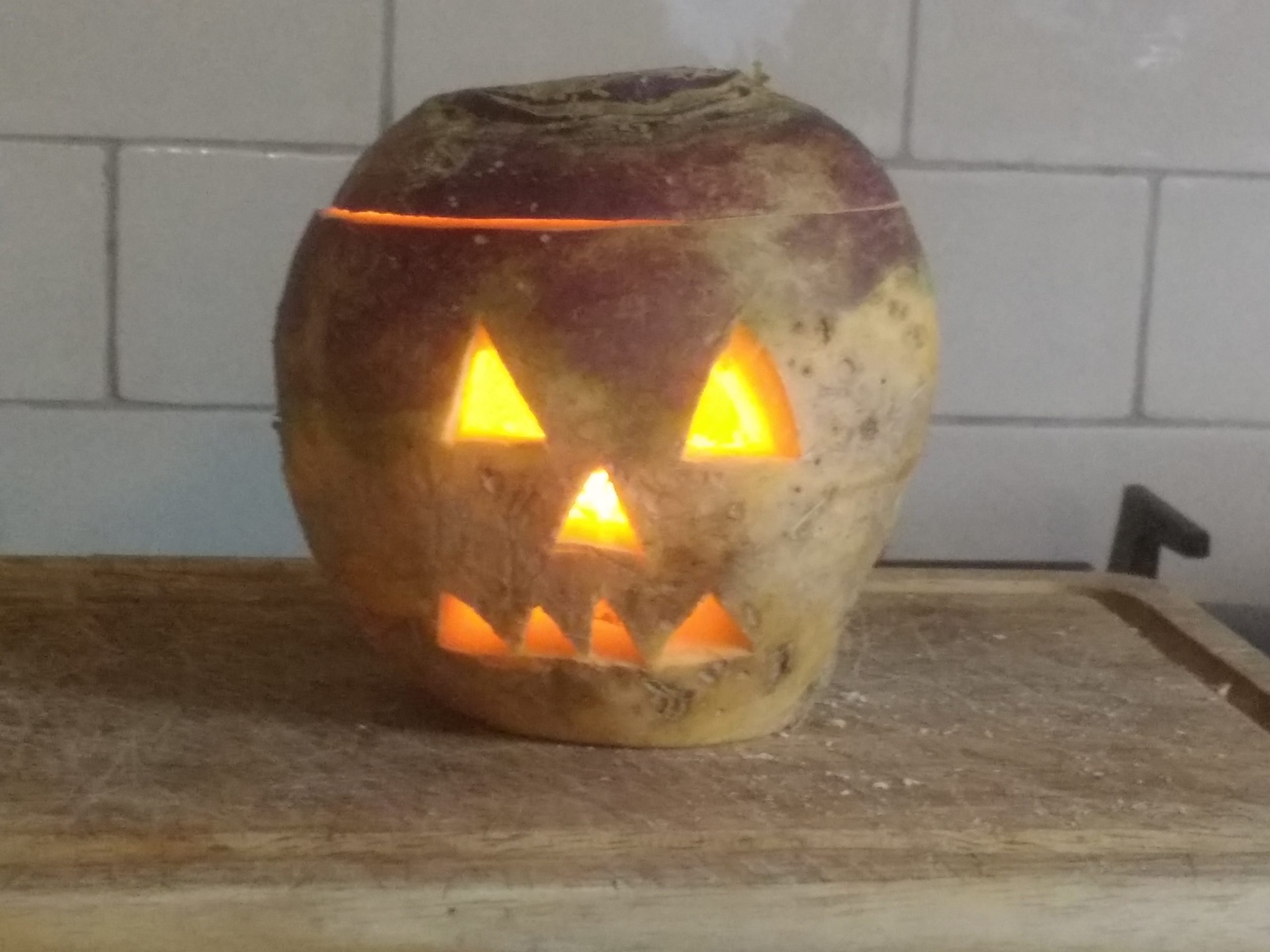 Turnip lantern made by one of our colleagues

Imitating demons and witches by dressing up as them while going from house to house was thought to confuse them and keep the person safe. Being anonymous and invoking the mischievous aspects of faeries has evolved into ‘trick or treat’. 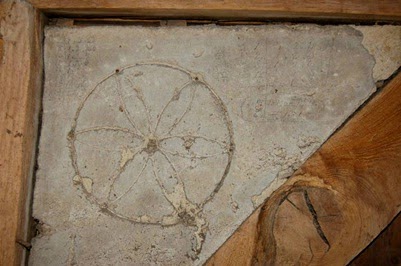 Daisy Wheel mark at Court Farm, Himbleton, made to ward off evil 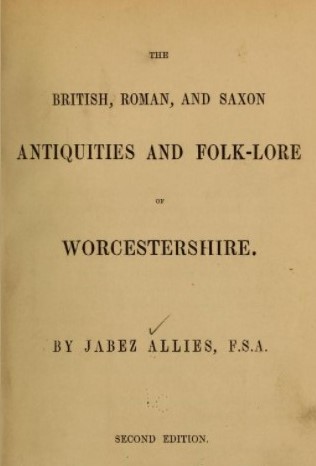 It can be difficult to know what traditions our ancestors had, or what they believed in. Most leave little archaeological trace. Many archival sources are more concerned with legal transactions and recording money rather than social history. This can be a big gap in the historical and archival record. Antiquarians have sought out traditions and recorded them, although many of these started in the 18th and 19th centuries. Their writings are an important record, although we cannot be sure how far they go. In Worcestershire Jabez Allies was an important recorder of folklore. In his book ‘The British, Roman and Saxon Antiquities and Folklore of Worcestershire’ (which can be found in our Local Studies Library) he talks about the Hoberdy’s Lantern, which he recalls from his childhood in the early 19th century – Jack o ’lanterns made from turnips. 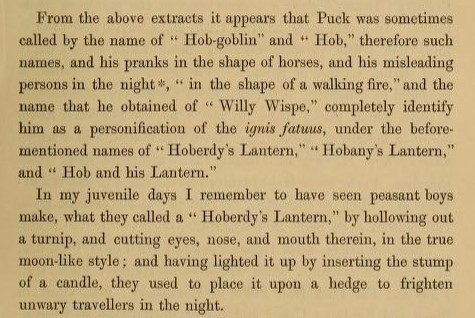 More recently, Roy Palmer’s Folklore of Worcestershire brings together known folklore and traditions from the past. It takes you through the calendar of the year, including Halloween, as well as retelling supernatural legends which he had come across. 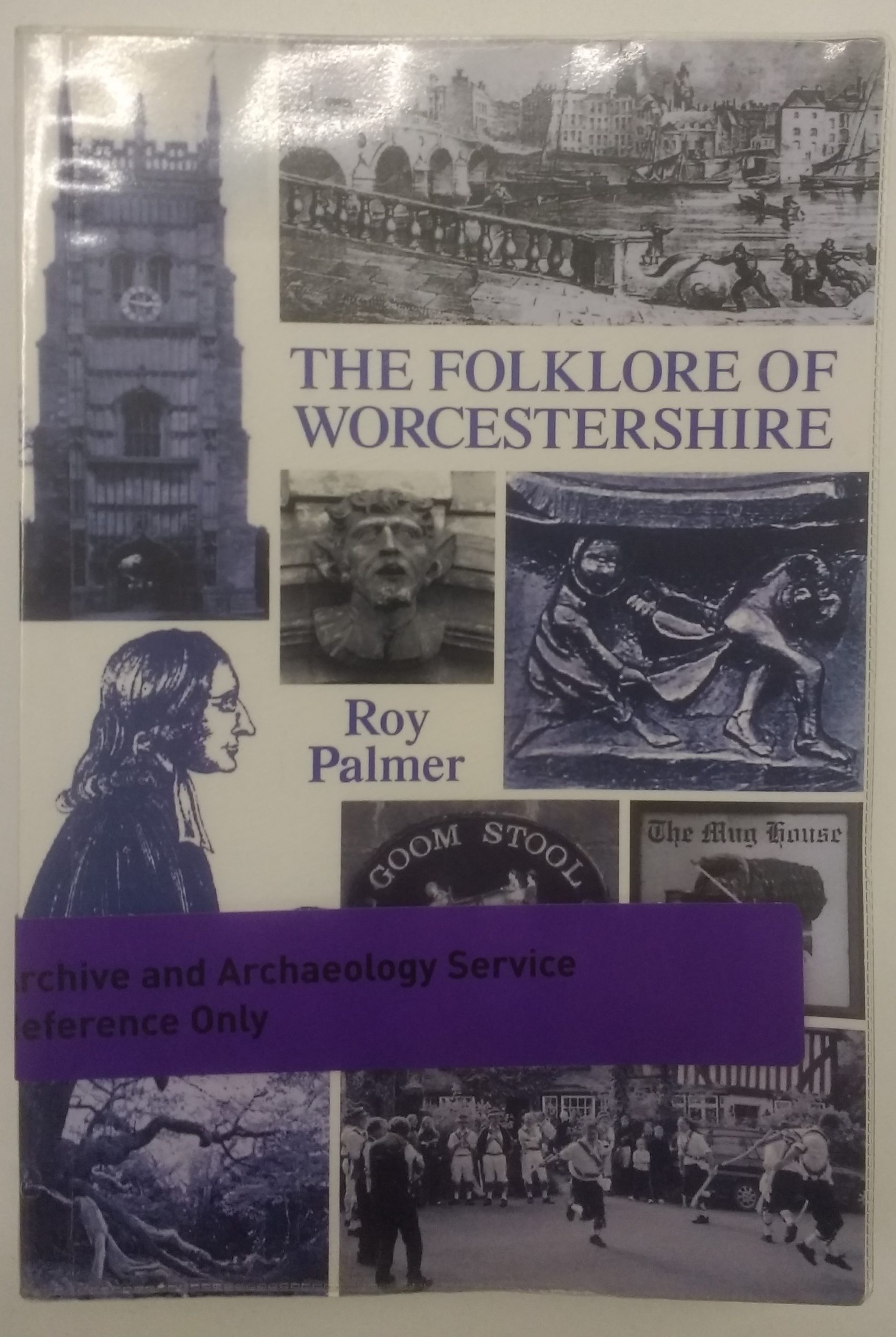 So when you decorate your house, dress up as a ghost or a witch and play games on people, you are carrying on a series of very old traditions. What will we add next? 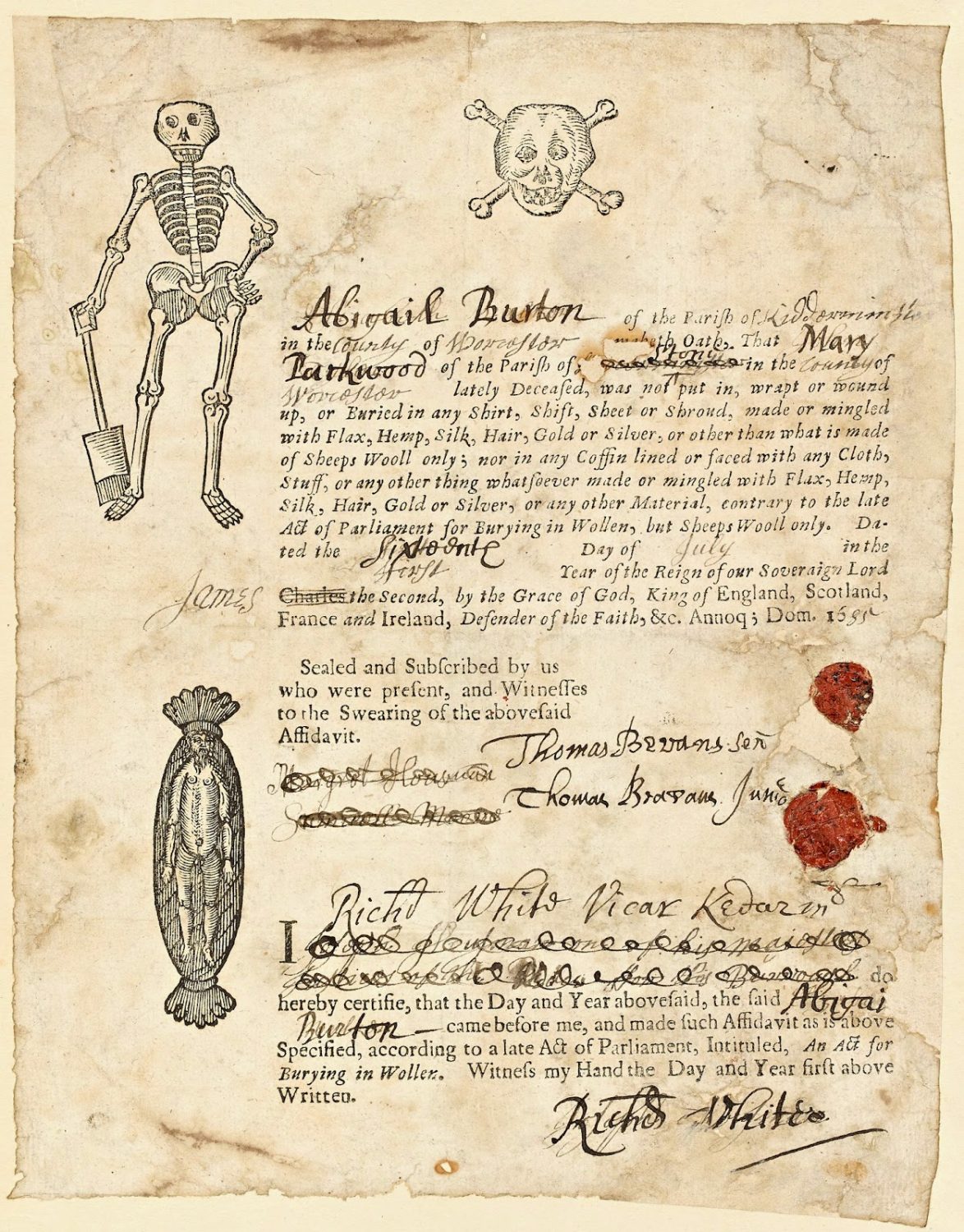 Certificate that a body had been buried in wool, with some gruesome images for decoration!

Over the years we have written a number of blog posts inspired by Halloween, using our collections and archaeological sites we’ve worked on. Have a read up on some of these 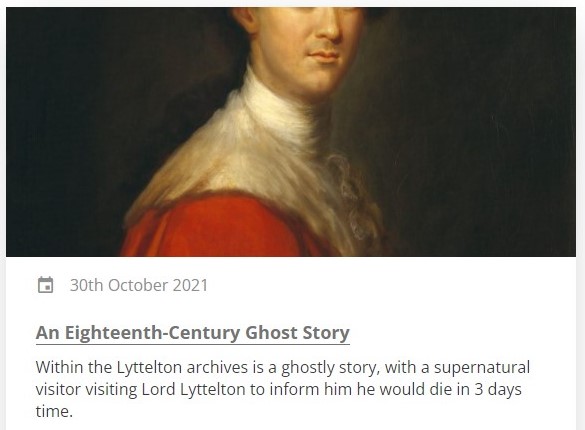 For this year we shared a spooky story from the Lyttelton archive. Sone Halloween traditions relate to foretelling the future, and even predicting when you’ll die. Thomas, Lord Lyttelton, told of how a ghostly apparition came and told him he’d die in three days time. This did indeed come to pass. The story has been retold many times, and embellished, but we found an account written just the following year. 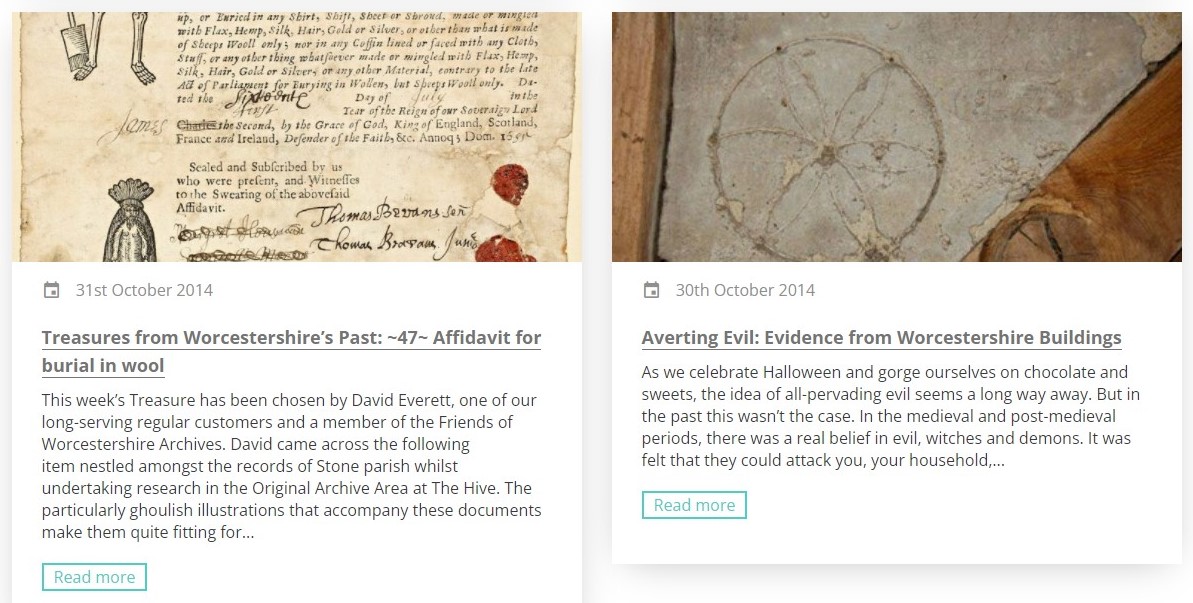 Read about a document with gruesome illustrations of skeletons. For those who wanted protection from evil one of our archaeologists wrote about the various symbols found in buildings which are believed to ward off evil.

One one of our archaeological sites we found a grave… but no body.  A specific example of a building with ritual symbols, sometimes called Witch Marks, was a building we were asked to record near Broadway.

Last year we shared two ghost stories, One was about supernatural happenings at Powick. The other was a story of Old Buckle, the headless horseman of Bishampton, details of whom can be found in the archival record!

On Remembrance Day we thought we'd share a story about local soldiers using sources within the Archives The starting point was a photo in Berrow's Pictorial Supplement of six brothers who had gone off to war.